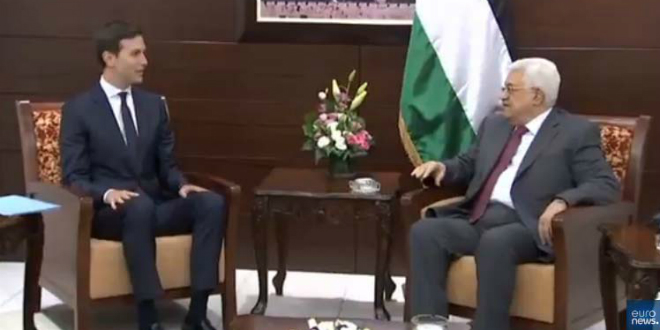 The report said the plan, many of whose tenets mirrored those favored by Prime Minister Benjamin Netanyahu, raised consternation among Abbas and other Arab officials as to the US’s intentions for an Israeli-Palestinian peace plan and whether the powerful crown prince was acting on behalf of the Trump administration.

Among the elements of the Saudi proposal outlined in the report were establishing the capital of a future Palestinian state in Abu Dis, a suburb of Jerusalem in the West Bank, east of Israel’s security barrier.

Another reported element of the Saudi pitch was to propose adding portions of Egypt’s Sinai Peninsula to Gaza in exchange for territories in the West Bank that the Palestinians would cede to Israel. Egypt has rejected such proposals in the past, with former president Hosni Mubarak recalling last week that he shot down the idea when it was raised by Netanyahu in 2010.

The report said Abbas was told by the Saudis he had two months to either accept the plan or face pressure to step down in favor of someone more amenable to the proposal.

The Times said details of the proposal presented to Abbas by the Saudi crown prince were confirmed by numerous sources, including a senior figure in Abbas’s Fatah party, a Palestinian official in Lebanon, a Lebanese politician, Western officials, and Israel’s Joint (Arab) List MK Ahmad Tibi.

Tibi denied the Saudis had presented Abbas with an American peace plan and dismissed Monday as “fake news” the notion that the crown prince had suggested Abu Dis become the capital of a Palestinian state. He said US officials had directly — rather than through the Sudis — “thrown around” proposals that the Palestinians would never accept, as they did not include “full sovereignty, the dismantlement of settlements or the end of the occupation.”

Tibi also warned that any move by Trump toward recognizing Jerusalem as Israel’s capital would end the possibility of a peace deal, and called the city’s status “a red line.”

Washington denied to The Times that the reported proposal was in fact its peace plan, while Riyadh insisted it remained committed to its own longstanding Arab Peace Initiative, which would include an Israeli withdrawal to the 1967 lines and a Palestinian capital in East Jerusalem in exchange for normalization with the Arab world.

The Saudi crown prince’s reported proposal to Abbas came only weeks after he met with Jared Kushner, Trump’s son-in-law and point man on the Israeli-Palestinian peace process. The two are said to have developed a close rapport.

The Times report came as Kushner made rare public remarks on the White House’s push to revive peace talks, and as Monday’s deadline for Trump to sign a waiver delaying the move of the US embassy to Jerusalem inched ever closer.

Speaking on Sunday at the Saban Forum, Kushner said Trump remained undecided on moving the embassy or recognizing Jerusalem as Israel’s capital.

Kushner also said his team’s goal is to build trust between the sides, which he emphasized was increasing due the absence of leaks on the US peace plan.

A flurry of reports in recent days said that while Trump is expected to sign the waiver delaying the embassy move, he will give a speech on Wednesday recognizing Jerusalem as the Jewish state’s capital.

Such a statement would be highly controversial, upsetting not only the Palestinians but also other Sunni Arab allies, including Saudi Arabia and Jordan.

Spoke with #US Secretary of State Tillerson on dangerous consequences of recognizing Jerusalem as capital of Israel. Such a decision would trigger anger across #Arab #Muslim worlds, fuel tension & jeopardize peace efforts.

A Palestinian delegation reportedly met with Kushner on Friday, warning him that relocating the embassy to Jerusalem, or formally recognizing the holy city as Israel’s capital, would “kill the negotiations” and mark the end of the peace process.

Both the head of the Arab League and Jordan’s foreign minister warned on Sunday that recognizing Jerusalem as Israel’s capital could lead to regional violence and derail attempts at renewing peace talks.

Eric Cortellessa and Dov Lieber contributed to this report.