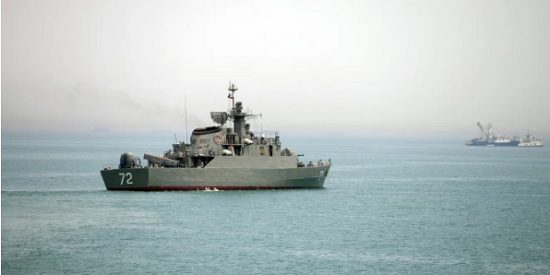 As Iran continues to fight to become a global superpower, the Islamic Republic’s flag may soon be flying halfway across the globe on warships sent to the Gulf of Mexico, Iran’s new Navy commander has announced.

“Our fleet of warships will be sent to the Atlantic Ocean in the near future and will visit one of the friendly states in South America and the Gulf of Mexico,” Iranian Navy Commander Rear Admiral Hossein Khanzadi was quoted by Iran’s semi-official Tasnim News Agency as saying.

Iran will likely use the warships’ visit to Latin America to advance its relationship with its ally Venezuela, a US adversary. And while Iran’s navy poses no real threat when up against the American navy, Khanzadi added that new vessels and submarines will be introduced next year to bolster the country’s fleet.

At a press conference in early November, outgoing Naval commander Rear Admiral Habibollah Sayyari said that “sailing in open waters between Europe and the Americas should be the navy’s goal, which will be realized in the near future.”

“No foreign military official could even imagine that the Iranian naval forces might reach the Atlantic Ocean,” Sayyari stated during a ceremony in August, adding that “no one saw it likely that Iranian forces could sail around Africa or go to the Suez Canal, but they proved to be capable of doing it.”

But the ships never made it, and according to Meir Javedanfar, Iran lecturer Interdisciplinary Center (IDC) in Herzliya and researcher at Meir Ezri Center for Iran & Persian Gulf Studies at Haifa University, “It’s not clear if Iran is actually going to do it,” this time either.

“Making an announcement is very different than actually being able to carry out such a big and sophisticated task of sending Iranian ships all the way to the Gulf of Mexico,” Javedanfar told The Jerusalem Post. “And even if Iran succeeds I think it’s going to be mostly for show for domestic purposes. The Iranians have said that the Americans have no business being in the Persian Gulf and therefore maybe by doing this they are trying to reciprocate by saying that ‘just as you come to our backyard we can come to your backyard.’”

While Iran has repeatedly warned that any act of transgression into the country’s territorial waters would be met with an immediate and befitting response, according to Javedanfar, “The US Navy in the Persian Gulf has got far more sophisticated anti-aircraft weaponry systems, aviation systems and marines than the Iranians ships, so the two can’t be compared.”

The Iranian navy is also currently taking part in the Indian Ocean Naval Symposium Multilateral Maritime Search and Rescue Exercise-2017 (IMMSAREX-17) which began Monday, along with the navies of 32 other countries. According to Tasnim, Iran’s naval military presence in international waters is “aimed at demonstrating their naval power and extending a message of peace and friendship.”

The growth of Iran’s navy is concerning to Israel, especially after Iran’s chief of staff Major General Mohammad Hossein Bagheri said that setting up naval bases in Yemen and Syria was “ten times more important” than nuclear technology.

According to Javedafar, Iran wants to portray the role of a superpower by deploying its revolutionary guard in countries such as Syria, Iraq and Yemen. Tehran, he said, wants to do the same with its naval forces, but due to the age of its fleet, it is more about appearance and does not pose any real threat to either Israel or the United States.

“Iran’s missiles are the biggest threat to us right now. Israel’s navy is far stronger, more modern and much better trained than the Iranian navy,” he said. “But if Iranian ships do make it to the Gulf of Mexico, the fact that it might rile some Americans will of course count in Israel’s favor.”