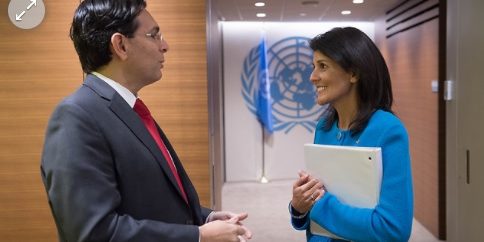 Israel’s ambassador to the UN, Danny Danon, is holding covert contacts with ambassadors from 12 Islamic and Arab countries that do not have diplomatic relations with Israel, Danon revealed to Ynet in an interview.

Danon described the contrast between the past and the present, saying that most of the ambassadors would once have done anything to avoid having any contact with Israel. Now, he said, they shake hands and their encounters are cordial and, at times warm.

With some of the ambassadors, he added, Danon collaborates behind the scenes in joint ventures.

“They still do not vote with us, but I can say that we have relationships with them on a mutual basis,” Danon said. “We are talking about a dozen Islamic countries, including Arab states that understand the potential of relations with Israel.

“We were once banned from every discussion and event held by the ambassadors of these countries, but today we cooperate with them on a weekly basis. My challenge is for these collaborations to come out of the closed rooms and go public,” Danon added, before explaining what he believed the key factor was behind this change.

“The State of Israel is not the regional problem, it is the regional solution. That is why we are strengthening this cooperation,” he charged.

“The change in atmosphere should be noted with the appointment of US Ambassador to the United Nations, Nikki Haley. The knowledge of US support for Israel today is public and reaches places it has not reached in the past.”

Even on issues where it is clear that the Arabs have a majority against Israel, Danon went on, “the United States insists on taking the moral high ground, like when it did against the scandalous decision that allows each year for the funding of anti-Israel propaganda activities for $6 million. The United States announced this year that it would protest and oppose it.”

On Wednesday, November 29, the Israeli delegation to the UN will celebrate the UN’s 1947 Partition Plan for Palestine, which led to the creation of the State of Israel.

The Israeli celebrations will precede the “International Day of Solidarity with the Palestinian People” held every year at the UN on November 29, which is usually used by the Palestinians to push anti-Israel resolutions.

The event will culminate in a reenactment of the vote, at the end of which dancers will dance the Hora, similar to how the Jewish community danced in Israel after the vote, followed by a special performance by Israeli singer Ninet Tayeb, who will perform her renditions of Naomi Shemer’s “Jerusalem of Gold” and the national anthem.

“There is much talk about Israel’s status in the world. This is an excellent opportunity to show where we stand today,” Danon said in reference to the event, which he initiated together with World Jewish Congress President Ronald Lauder.

“This is an historic vote. Seventy years ago, the Jewish people gathered votes to achieve the required majority. Today we are a regional power which holds diplomatic relations with about 160 countries.”

He said that the event would be attended by representatives of countries that voted against the partition, such as India, “who today is a great friend of ours who changed its voting patterns and is no longer voting automatically against Israel.

“Or Egypt, which was an enemy state and we are now cooperating against regional terrorism. The same applies to Turkey and Greece.”

The event will be held in cooperation with Keren Hayesod and Jewish organizations from around the world, including StandWithUs, the European Coalition for Israel and others.