Portents of a quagmire in Syria 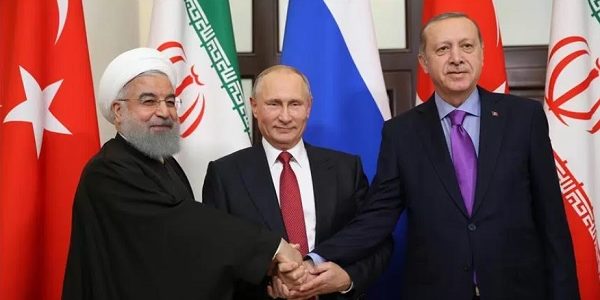 Is the war in Syria won?

The images broadcast this week from Sochi, the Russian vacation town on the Black Sea coast, were pictures of victory – for the bad guys.

On Tuesday, Russian President Vladimir Putin stood beside his Syrian client, President Bashar Assad, who licked Putin’s boots, as well he should have.

Assad owes his regime and his life to Putin.

The next day, Putin was joined by his allies – the presidents of Iran and Turkey.

Hassan Rouhani and Recep Tayyip Erdogan made the pilgrimage to Sochi to stand at Putin’s side and declare victory in the war and dedicate themselves to the cause of “peace and reconciliation” in post-war Syria.

To achieve their lofty goals of peace and reconciliation, Putin and his partners declared that, in the near future, Sochi will be the sight of a peace conference where all the relevant factions in Syria will be represented. The parley they described is set to take place parallel to – and one assumes at the expense of – the sixth round of Syrian reconciliation talks scheduled to take place under UN auspices next week in Geneva.

Several Israeli commentators viewed Putin’s Sochi talks precisely as he wished them to.

Ehud Yaari, Reshet/Keshet’s veteran Arab affairs commentator declared: The US is finished in the Middle East! The capital of the Middle East is now located in Sochi, he proclaimed in back-to-back newscasts.

In certain respects, Yaari is right. Things are looking good these days for the axis of evil.

Wednesday was a particularly good day for Iran. Not only did Rouhani do his victory dance with Putin and Erdogan, but as they were showering themselves in triumph in Sochi, Iran’s Lebanese puppet, Saad Hariri, was returning to Beirut after his misadventures in Saudi Arabia.

As expected, Hariri canceled the resignation he announced dramatically a week-and-a-half earlier in Riyadh, Saudi Arabia, after accusing Iran and its Hezbollah army of controlling Lebanon.

On the surface, Hariri’s return is a boon for Iran. If he had remained in Saudi Arabia, Iran would have lost its fig leaf.

Hariri’s duty as prime minister is to snow the West into believing that his government and the Lebanese Armed Forces are a counterweight to Iran and Hezbollah, even though they are controlled by Iran and Hezbollah.

Until his trip to Riyadh, Hariri had been doing a good job.

Hariri’s lobbying efforts won Lebanon billions of dollars in US military and civilian aid. Congress would never have agreed to appropriate the assistance if Hariri hadn’t been so persuasive.

But it is far from clear that Hariri will be much of a fig leaf after he let the Iranian/Hezbollah cat out of the bag in Riyadh.

A rising chorus of US lawmakers are demanding an immediate end to US assistance to the LAF. And Hariri’s return to Beirut didn’t dim those voices.

In August, Hariri visited President Donald Trump at the White House. Trump praised Lebanon as “an ally” in the war on terrorism. He increased US aid to the LAF and deployed US special forces to Lebanon where they fought at the side of the LAF under effective Hezbollah command.

As for Erdogan, he arrived in Sochi a spent force.

Erdogan is perhaps the biggest loser of the war in Syria. He was the principal sponsor of the anti-Assad opposition that morphed into Islamic State. Erdogan’s cooperation owes mainly to his lack of better options. The US stopped supporting his campaign in Syria two years ago.

Since the failed military coup against him in July 2016, Erdogan has become ever more hostile to the US. This hostility informed his recently concluded deal with Putin to purchase Russia’s S-400 anti-aircraft system. The S-400 threatens every fighter craft in the US arsenal. US officials have responded to his move by seriously considering the possibility of canceling the sale of 100 F-35s to Turkey.

Turkish expulsion from NATO – once a taboo subject – is now regularly discussed in Washington policy circles.

The main reason Erdogan has sided with Putin in Syria is because the US has sided with Syria’s Kurds. Erdogan views the Syrian Kurds as a threat to the stability of his regime. He expects Putin to support his determination to destroy Kurdish autonomy in Syria.

If Putin fails to meet his expectations, Erdogan may abandon his new friends. Or he may stick with them and just become ever more dependent on Putin.

Whatever the case, he won’t be empowered by his membership in Pax Putin.

And this brings us to Putin and Russia.

Certainly it is true that the Sochi summitry has cemented Putin’s position as savior of Mother Russia.

A mere generation ago, Russia was a washed up, fifth-rate power. At the end of the Cold War, the world belonged to America. Today, world leaders beat a path to Putin’s door.

But not everything is roses and sunshine.

Russia’s alliance with Iran and Turkey is predicated on Russia remaining in Syria – come what may.

And what is coming is not likely to be pretty.

While Putin, Erdogan and Rouhani were congratulating themselves in Sochi, another conference was happening in Riyadh. There, leaders of the anti-Assad militia were meeting to discuss their next moves ahead of the UN-sponsored talks next week in Geneva.

True, the forces represented in Saudi Arabia aren’t as powerful as the Iranians, Hezbollah and Russia. But they have guns. And they are disgruntled. And if any number of governments want to give them more guns, they will have more guns and bullets. And they will shoot them at the people keeping Assad in power.

Commentators declaring the dawn of a Russian-controlled Middle East where the US is dead to rites ignore another basic fact. There are a lot of US forces in Syria.

In late October, US Major General James Jarrard, commander of the US’s anti-ISIS task force in Iraq and Syria, “accidentally” told reporters that there are 4,000 US troops in Syria. When reporters pounced on his statement, Jarrard quickly backtracked and said he made a mistake.

There are only 500 US forces in Syria.

On Thursday, the Washington Post reported that the administration does not intend to withdraw US forces from Syria now that the mission against ISIS is largely complete.

US forces in Syria are concentrated in Syrian Kurdistan. If the US protects the Kurdish autonomous areas along the border with Iraq, Erdogan will again lose a big bet in Syria. His alliance with Putin will have brought him nothing but a deterioration of his ties with the US and instability at home as Turkish Kurds expand their ties to the autonomous Syrian brethren.

Thanks in large part to Putin and his allies, Syria, today, is one vast ruin.

According to UN assessments, reconstruction costs for the country will run anywhere from $200 billion-$350b.

Does Putin intend to finance Syrian reconstruction? How about Ayatollah Ali Khamenei, or Erdogan or China? Of course not.

And, if Syria remains a ruin, Syria will not be pacified; and, if Syria isn’t pacified, it will continue to bleed.

The media made a big deal about Putin’s phone call to Trump after his meeting with Assad. Some commentators viewed the call as proof Putin is calling the shots in the Middle East. Others saw the opposite – that Putin doesn’t dare move too far ahead of the Americans.

But those views are likely both wrong.

Putin’s record indicates that he cares about two things: reasserting Russia’s great power status and money. For his victory in Syria to avoid becoming a Pyrrhic one, he needs lots of American money to finance Syrian reconstruction.

This brings us to the US, and what Washington wants to do in Syria and the wider Middle East.

So far, the Americans have made every possible mistake in Syria and Iraq.

Then president Barack Obama allowed Assad to commit a genocide of Syria’s Sunnis and foment the refugee crisis in Europe. He allowed Iran and Hezbollah to take over Syria and Iraq. He allowed Erdogan to organize an anti-Assad rebel force dominated by the Muslim Brotherhood, which over time morphed into ISIS. He allowed the Russians to use the war as a means to reassert their position in the Middle East 33 years after the Soviets were humiliated and expelled from the Levant.

For his part, Trump has maintained Obama’s Syria policies in relation to Russia, Iran, Hezbollah and Assad. He expanded US military assistance to the LAF. He permitted Iranian militias controlled by Iran’s Revolutionary Guards to cooperate with US-trained Iraqi forces in seizing Kirkuk from Kurdish forces. In so doing, Trump betrayed the Kurds, the US’s only reliable allies in Iraq.

If the Americans wish to maintain their record of failure, they have many options for doing so. They can abandon the Syrian Kurds. They can help Putin by underwriting Syrian reconstruction.

They can continue to arm the Hezbollah-controlled LAF. But the Americans do have an option to succeed, as well.

If Trump keeps US forces in Syrian Kurdistan, and if he refuses to help pay for Syrian reconstruction so long as Assad remains in power and Iranian and Hezbollah forces remain on the ground and if the US ends its civilian and military assistance to Lebanon, the US and its allies will be strengthened, and Russia and its allies will be weakened.

If the Americans do not interfere as Syrian “freedom fighters” defend against Iranian or Russian “aggression,” it won’t matter what terms the Iranians give Putin for gas, or oil or nuclear deals. He will seek a way out of Syria.

On May 1, 2003, then president George W. Bush landed a S-3 Viking fighter craft on the deck of the USS Abraham Lincoln dressed in a flight suit. Before an audience of cheering troops and against the backdrop of a banner that read “Mission Accomplished,” Bush declared: “Major combat operations in Iraq have ended. In the battle of Iraq, the United States and our allies have prevailed.”

In the years that followed, probably not a day went by when Bush didn’t regret his victory dance on the USS Lincoln.

Putin, Rouhani and (to a much smaller degree) Erdogan are right that, as of now, they are the victors in Syria. But let us not empower them by believing them invincible. Their victory against ISIS – achieved with massive US assistance – is certainly an achievement. But it isn’t the end of the story. If the Americans do not save them, the situation on the ground augers quagmire, not triumph, for their axis and for their separate regimes.