Bannon and the anti-Israel establishment 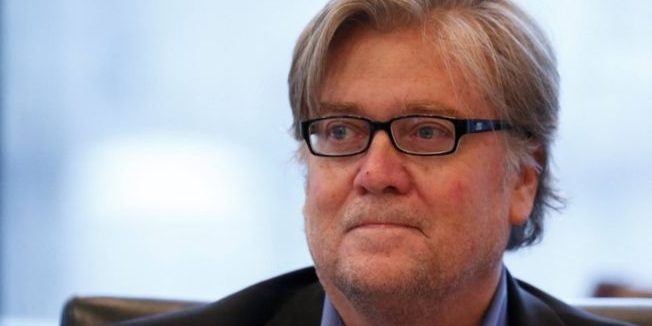 Speaking at the Zionist Organization of America’s annual dinner, Steven Bannon, US President Donald Trump’s former chief strategist and current CEO of the Breitbart news website, said the US political establishment has “lowered the bar on what is supposed to be.”

Bannon invited the pro-Israel activists to join what he referred to as the “insurgency movement against the Republican establishment and against the permanent political class in Washington, DC.”

Bannon argued that it is because of the Republican establishment that then president Barack Obama was able to implement the nuclear deal with Iran.

Bannon is correct. Had a non-establishment senator such as Ted Cruz chaired the Senate Foreign Affairs committee in 2014 and 2015 instead of Senator Bob Corker, in accordance with the US constitution, Obama’s radical nuclear deal would have been treated like a treaty. It would have required the approval of two-thirds of the Senate and it would have gone down in flames.

Instead, Corker stood the Constitution on its head, co-sponsoring the Iran Nuclear Agreement Review Act, which required two-thirds of the Senate to reject the deal in order to block its implementation.

As for US financing of Palestinian terrorism, the blame lies mainly at the feet of the permanent political class – particularly the denizens of the State Department.

With the support of Democratic and establishment Republican lawmakers, for more than 20 years the State Department has successfully watered down or canceled legislative initiatives to end US support for the terrorism-supporting, PLO -led Palestinian Authority. State Department officials have similarly led every effort to water down or cancel Congressional initiatives that strengthen the US alliance with Israel.

The power of the State Department and its colleagues in the permanent bureaucracy to maintain US policies that are substantively anti-Israel and pro-PLO is being exerted today in the lead up to the publication of Trump’s “peace plan” for Israel and the Palestinians.

According to a report published in The New York Times last weekend, sourced to White House officials, Trump intends to announce his “peace plan” in January.

Later reports disputed that claim, saying the plan would be announced in March.

Whatever the case, according to the Times’ story, Trump’s “peace plan” will look similar to – and be substantively indistinguishable from – “peace plans” adopted by the last three presidents.

Like Bill Clinton, George W. Bush and Obama, according to the Times’ account, Trump’s plan will be based on the assumption that for peace to be concluded between Israel and the PLO , a Palestinian state must be established on land now controlled by Israel.

Trump’s plan will reportedly also discuss the partition of Jerusalem and address the Palestinian claim that the 450,000 Israelis living beyond the 1949 armistice lines in Judea and Samaria must be expelled from their homes and communities for peace to be achieved.

In a manner similar to Bush’s “Roadmap to Peace,” analysts told the Times that Trump’s plan will include two stages. In the first stage, Israel will be required to block construction of homes for Jews in united Jerusalem and Judea and Samaria; to transfer control over land in Area C to the PA ; and to restate its commitment to the establishment of a Palestinian state.

But, despite the denials, there are indications that the Times’ account is accurate. For instance, Prime Minister Benjamin Netanyahu has justified all his recent moves to curtail construction for Jews in Jerusalem, Judea and Samaria, to provide funding to the PA and to suspend initiatives to expand Jerusalem’s municipal borders as necessary to prevent a fissure in US-Israel relations.

Trump’s team is led by his senior adviser and sonin- law, Jared Kushner, and run by his chief negotiator, Jason Greenblatt. Members of Greenblatt’s team include deputy national security adviser Dina Powell and US Ambassador to Israel David Friedman.

According to the Times, Greenblatt and his team “are consulting with Donald Blome, the consul general in Jerusalem, and others from the State Department and the National Security Council.”

And this is where the problem begins.

Ahead of Trump’s visit to Israel in May, Channel 2 reported that Blome lobbied heavily for Trump to cancel his plans to visit the Western Wall. While Trump did visit the Wall, Blome – supported by National Security Adviser H.R. McMaster – blocked Netanyahu from accompanying Trump on his visit.

In a press briefing, McMaster refused to say that the Western Wall is located in Israel.

Secretary of State Rex Tillerson referred to Tel Aviv as the “home of Judaism” on the plane ride to Israel.

In other words, Blome, Tillerson, McMaster and Mattis have all embraced the view that the US should not treat Israel with the same respect it treats other countries – let alone other allies. Instead of deserving respect, Israel, in their view, deserves unique reproach to the point where even acknowledging its capital city and basic geographic facts is considered unacceptable.

This then brings us back to the “peace plan” that Greenblatt and Kushner are putting together in consultation with Blome, the State Department and McMaster’s National Security Council.

If Greenblatt and Kushner compose a “peace plan” that satisfies the State Department and its governmental counterparts, and if Trump adopts it as his official position, they will guarantee that he will fail to advance the cause of peace; will harm Israel; will empower the PLO ; and will diminish the US’s standing as a power in the Middle East.

In 1993, Israel and the PLO concluded a peace deal in Oslo based on the European assumption that Israel is to blame for the Arab-Israel conflict.

Israel’s peace treaties with Egypt and Jordan are based on this pre-Oslo process assumption.

But when it assumed leadership of the Oslo process, the US also embraced the European narrative it was predicated on: Everything is Israel’s fault.

We saw that power brought to bear in 2003 with the drafting of the Roadmap.

In 2002, Bush said he would not support Palestinian statehood unless new Palestinian leaders who didn’t support terrorism took over the PA from Yasser Arafat.

Rather than take Bush’s position seriously, the State Department emptied it of all meaning.

US officials crowned Arafat’s deputy of 40 years, Mahmoud Abbas, as a reformer and peacemaker, despite the utter absence of any evidence pointing to this conclusion.

Having done so, the State Department declared that reform had been achieved. In support of that reform, they expanded US support for the PA and intensified US pressure on Israel.

Bush’s State Department was able to subvert Bush’s position because neither then secretary of state Colin Powell nor then national security adviser Condoleezza Rice supported it. Both were more than happy to pretend that the US policy toward Israel and the Palestinians had shifted toward Israel, when the opposite was the case.

We see a similar situation unfolding today with Trump.

While Trump has not called for new leadership, he has called for an end to Palestinian financing of terrorism. This demand will clearly not be met now that the PLO has reached a power-sharing agreement with the Hamas terrorist regime in Gaza. Every cent transferred to Gaza is a cent that supports terrorism.

And yet, according to the Times account, and judging by Netanyahu’s behavior, the Trump administration is preparing a “peace plan” that will bring no peace but will harm Israel and empower the PLO .

The thing of it is that it is hard to imagine that Trump is engaged sufficiently in discussions of the issue to be aware of what is likely taking place. Bush certainly was not aware that his positions were being undermined by his advisers.

This brings us to Greenblatt and Kushner.

Whereas Rice and Powell were consummate Washington insiders whose careers were made in the bosom of the foreign-policy establishment, Greenblatt, Kushner and Friedman are all consummate outsiders. They owe the establishment nothing. Dina Powell is the only member of Trump’s team who is an establishment figure.

Trump brought in his team of outsiders to run his Middle East policy because he understood – and repeatedly remarked on the fact – that Washington’s foreign policy establishment has failed for decades to develop successful Middle East policies.

If we are to believe the Times story and heed the signals Netanyahu has sent, Kushner and Greenblatt have surrendered to the establishment and are poised to conclude a peace plan that will be substantively identical to those of the past three administrations.

And, as a consequence, it will fail just as badly as the policies of the past three administrations.

Bannon is right that pro-Israel forces should fight to diminish the power of the Washington foreign- policy establishment – first and foremost the State Department – to empty the term pro-Israel of substance. The question is whether that fight needs to be directed at the White House or whether Trump’s team of outsiders is willing and able to stand up to that establishment and adopt a policy not based on hostility toward Israel and support for Palestinian terrorists and, therefore, not guaranteed to fail.