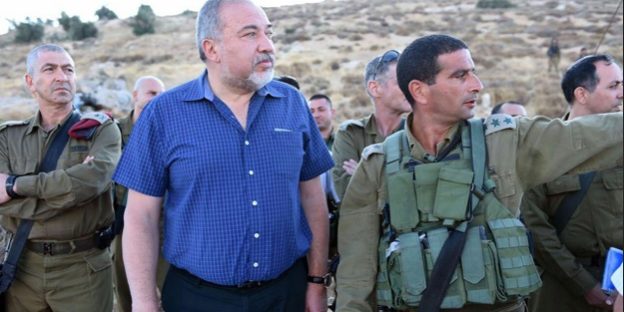 Defense Minister Avigdor Lieberman was touring the North on Wednesday against a background of tension on Israel’s northern front and the Israeli dissatisfaction with Russia’s confirmation of an Iranian presence in Syria.

“We will not allow the establishment of a Shiite and Iranian presence in Syria, and we will not allow all of Syria to be turned into a leading front against Israel. Anyone who hasn’t understood that, should,” Lieberman said.

Lieberman spoke on the second day of a two-day tour of the northern border, accompanied by IDF Chief of Staff Lt. Gen. Gadi Eizenkot; Deputy Chief of Staff Maj. Gen. Aviv Kochavi; GOC Northern Command Maj. Gen. Yoel Strick and commanders of the Bashan and Utzvat Hagalil divisions. Lieberman was taken along the entire length of the border, met with IDF officers and soldiers and was briefed on force readiness.

Lieberman expressed his appreciation for the soldiers and officers of the Northern Command, who are charged with keeping things quiet, both on the Lebanese border and on the Golan Heights.

“When you meet with IDF soldiers, you’re confident that you have someone you can depend on. The IDF is prepared for any scenario. We maintain absolute freedom of operation and the only considerations that guide us are considerations about Israel’s security,” Lieberman said.

Meanwhile, Iran-backed forces could potentially deploy within several miles (kilometers) of the Israeli frontier, the official map included in a preliminary agreement that seeks to establish buffer zones in southwest Syria shows.

The map, a copy of which was shown to the Associated Press by an Israeli official, shows the buffer area nearly abutting the town of Quneitra next to the Israeli Golan Heights. A U.S. official confirmed the map’s authenticity but said the deal was only preliminary and still subject to changes.

Israel has long complained about the involvement of Iran and its Lebanese proxy Hezbollah in Syria. Iran and its Shiite allies have sent forces to back Syrian President Bashar Assad, who appears to be on his way to victory after a devastating six-year war.

Israeli leaders have repeatedly warned that they oppose a permanent military presence by Iran or its allies in postwar Syria. Officials have pushed for assurances from the international community that any Iranian-backed forces remain far from Israel’s border.

Israeli officials have said little about last week’s preliminary agreement, noting only that Israel was not a party to the deal and will defend its interests.