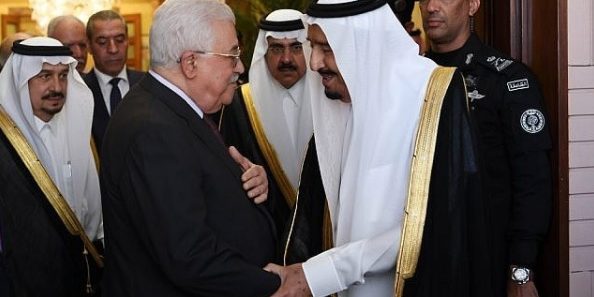 By Sue Surkes, Times of Israel—

Saudi Arabia last week ordered Palestinian Authority President Mahmoud Abbas to either accept an Israeli-Palestinian peace deal being put together by the Trump administration, or resign, according to an Israeli report Sunday.

The Trump administration has begun drafting an Israeli-Palestinian peace proposal based on a two-state solution, officials and analysts quoted by The New York Times said on Saturday.

A senior White House adviser said the plan would attempt to tackle controversial issues such as the status of Jerusalem and West Bank settlements.

Abbas was called unexpectedly to Riyadh six days ago by the office of the powerful Crown Prince Mohammad bin Salman.

There, in addition to being told to “accept Trump’s peace plan or quit,” he was ordered to keep away from any Iranian influence, according to the report on Israel’s Channel 10.

The Saudi authorities made clear that they were dismayed by media images of Hamas’s deputy political leader, Saleh al-Arouri, visiting Tehran in October. Arouri, a Hamas terror chief, was the Hamas signatory on a reconciliation deal with Abbas’s Fatah group signed in Cairo last month.

The Saudis also made clear that Lebanese activists within Abbas’s Fatah faction could no longer cooperate with the Iranian-backed Lebanese terror organization, Hezbollah.

Since the reported the warnings, which could threaten the new Palestinian unity agreement signed by Fatah and the Iranian-backed Hamas in the Gaza Strip, Palestinian media displayed a rare degree of unity in recent days by coming out against Iran.

The daily newspaper al-Hayat al-Jadida, for example, wrote that, “The Palestinian Authority will not allow Iran to interfere on its territory” or to try to create a Palestinian copy of the Hezbollah.

Sunni Saudi Arabia has been flexing its muscles opposite Shiite Iran.

Last week, Lebanese prime minister Saad Hariri turned up in Riyadh, appearing on Saudi TV to announce his resignation and prompting rumors that he was being held against his will.

On Sunday night, Hariri gave his first TV interview, attacking Iran and its Hezbollah proxy, and claiming that he would return to Lebanon in the coming days to formally submit his resignation to Lebanese President Michel Aoun.

Read more on Times of Israel...