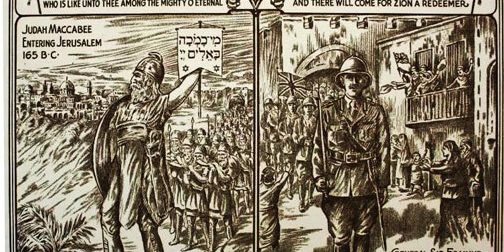 November 2, 2017 marked the 100th anniversary of the signing of the Balfour Declaration, in which Great Britain declared that “His Majesty’s Government view with favour the establishment in Palestine of a national home for the Jewish people, and will use their best endeavors to facilitate the achievement of this object…”

When Palestinian Authority President Mahmoud Abbas heard that Britain was preparing to celebrate the centennial of this famous document and all that it has represented concerning the rebirth of the state of Israel, he appealed to Arab leaders “to sue the British government for this historic crime that has brought upon the Palestinian people a tragedy from which it suffers to this day.”

It could not be clearer—Abbas’ goal is to destroy Israel and replace it with another Muslim Arab state!

Last September—during a UN General Assembly address—Abbas called on the UK to apologize for the declaration.

“We ask Great Britain, as we approach 100 years since this infamous declaration, to draw the necessary lessons and to bear its historic, legal, political, material and moral responsibility for the consequences of this declaration, including an apology to the Palestinian people for the catastrophes, misery and injustice this declaration created and to act to rectify these disasters and remedy its consequences, including by the recognition of the state of Palestine,” Abbas said. “This is the least Great Britain can do.” (reuters.com)

Israeli Prime Minister Benjamin Netanyahu, also speaking at the UN, noted that the PA’s stance on the centenary is “another example” of the Palestinian refusal to recognize Israel’s right to exist.

“That’s almost 100 years ago … Talk about being stuck in the past! The Palestinians might as well file a class action suit against Abraham, for buying land in Hebron,” he said, referencing the Biblical figure. (independent.co.uk)

In a speech to the Christian Friends of Israel in December 2016, Britain’s Prime Minister Theresa May called the pivotal letter written by Conservative Foreign Secretary Arthur James Balfour to Lord Rothschild in 1917 “one of the most important letters in history” which “demonstrates Britain’s vital role in creating a homeland for the Jewish people.” May added, “It is an anniversary we will be marking with pride.” She has invited Prime Minister Benjamin Netanyahu to the official anniversary celebrations.

And celebrate they will! Jews, Christians, and conservative statesmen and politicians will celebrate, along with British citizens who love Israel. University students, school children and diplomats from many countries will join in the celebrations.

A website, balfour100.org, has been created by and for the UK Christian coalition to commemorate the Balfour Declaration centenary. There will be a huge event at the Royal Albert Hall on November 7 with many other events around the UK. In fact, there will be celebrations during the month all over the nation.

Why then, is the Balfour Declaration so important? Why is it so “hallowed” among the Jewish people and evangelical Christians, and so controversial with Palestinians, Arabs and liberal politicians?

Critical to international law, it was the first formal policy declaring the right of the Jewish people to settle in their original homeland. Inevitably, understanding its true meaning and intention is clouded by differing worldviews and political bias. Nevertheless, it was the first step by any nation to recognize Zionist aspiration of any kind.

For people who do not know or believe the Old and New Testaments, the claim of Biblical rights to the land belonging to the Jewish people dating back 2,000 to 4,000 years just makes liberal eyes roll when they see Arabs who claim their ancestors lived in Jericho some 7,000 years ago, but who today live under the control of the 70-year-old nation of Israel.

One thing is certain: For the world in 1917 to even imagine a goverment making an official declaration to recreate the state of Israel some 1800 years after its demise, would seem objectively impossible, even fantastical. With millions of Muslims living in the Middle East whose religion teaches extreme hatred of Jews, with noxious centuries-old antiSemitism throughout Europe, with deep anti-Semitism even in the United States a hundred years ago, who could imagine a scenario that a small island nation with an empire where the sun never set, would focus in on the non-existent nation of Israel, and seriously consider raising her from the dead?

Nevertheless, by the hand of God, it happened that in the years 1916-1922, David Lloyd George became Prime Minister of the largest empire the world had ever seen. Great Britain controlled 13 million square miles of the earth’s landmass and 20% of the world’s population.

The man God placed at the helm was a Welsh Christian who had been adopted by the family of a Baptist minister. He then continued as a devout member of the Disciples of Christ church all his life. He had been brought up on the Bible. In a speech much later in his life during a visit to “Canaan,” he told his Jewish audience, “I heard of Jezreel and Esdraelon, of Carmel and of Zion before I knew of the existence in my own land” of battles and disputed frontiers which occurred in England’s history. Because of his Biblical background he had been a loyal Zionist for several decades (unlike many other politicians from more conservative denominations such as the Anglicans.) (jta.org)

But among the daily duties of this Prime Minister, Lloyd George was also in charge of executing World War I in the theatres of Europe and the Middle East. It took a foreign secretary with like-minded theology to concentrate on drafting a document which would actually bring to life a homeland for the Jewish people. It so happens that Arthur Balfour was just such a foreign secretary and was in complete agreement with Lloyd George’s sentiments.

A CABINET FULL OF CHRISTIANS

Balfour was known as a devout Christian, and theology was one of his favorite subjects. “His interest in the Jews and their history was lifelong,” his niece Blanche Dugdale later wrote. “It originated in the Old Testament training that Balfour had received from his mother and in his Scottish upbringing. … the problem of the Jews in the modern world seemed to him of immense importance,” wrote Dugdale. “He always talked eagerly on this … that Christian religion and civilization owe to Judaism an immeasurable debt, shamefully ill repaid.”

In fact, two decades later during World War II, Lord Balfour’s family took in 180 Jewish children who were transported into Britain before the Nazis could reach them. (jpost.com)

It would have been highly improbable to put together a more evangelical group of men who were influenced by the Bible at the highest level of British government in those days than the ones who made up that group. In fact, only one cabinet member was firmly anti-Zionist, Edwin Samuel Montagu, and he was Jewish! (pre-trib.org)

But before Prime Minister Lloyd George and Secretary Balfour would feel the courage to finalize such a profound undertaking, they felt they must have the backing of the United States. Would America be interested in such an unusual enterprise?

Wilson was a Presbyterian elder of deep religious faith, the son of a leading theologian. He read the Bible daily, and said he felt “sorry for the men who do not read the Bible every day.” He also prayed on his knees twice a day. In short, Wilson was the most Christian president the U.S. has ever had. Had Lloyd George not had Wilson’s full support, it is doubtful the British would have put forward the Declaration. (haaretz.com)

One other person was providentially instrumental in persuading the British prime minister to take this extraordinary leap into legalizing a Jewish homeland. Chaim Weizmann was a brilliant Jewish scientist who devised a process to create acetone—a substance the British munitions industry was in dire need of. This achievement granted him access to the very politicians deciding the future of the Middle East. His leadership was already recognized some years earlier when he emphatically pushed for a Jewish homeland in Palestine, and not Uganda, of all places, as some influential voices were demanding.

THE DIE IS CAST

On November 2, on behalf of the British Government, Foreign Secretary Arthur Balfour sent the Declaration in the form of a letter to Lord Walter Rothschild, a leader of the Jewish community. (wikipedia.org)

Historically, the Rothschild family was not known to be Zionistic. In fact, many British Jews were not at all Zionists. While many prominent Jews in Western Europe were afraid that a Jewish homeland could threaten their status in Europe, Walter Rothschild argued that a Jewish Nation could be a home for those Jews who did not or could not live in their countries. As a major leader of the Jewish Community in Great Britain, Rothschild received and delivered the letter to the Jewish Zionist Federation, where from then on, it became an authoritative document used in international policy and law.

Meanwhile, the British were bogged down in the Middle East in their offensive against the Ottoman Turks. Lloyd George quietly moved his best general from the Western Front in Europe to take charge of the Palestine Campaign, and General Edmund Allenby did not disappoint. Lloyd George also ordered an increase in the number of British troops, and Allenby “received extra aeroplanes, battalions and battleships.” These moves were done quietly to make sure the British would capture Jerusalem before the French or the Germans. (pre-trib.org)

Now it so happened that General Allenby was a devoted Christian who read his Bible on a daily basis. Allenby was a believer in Bible prophecy. He had to have been deeply moved when he received the commission to liberate Jerusalem from the Islamic Ottoman Empire and prepare the land of Canaan for the return of the Jewish people. Two British army sergeants were the first to see Jerusalem’s Muslim mayor carrying a white flag of surrender on December 9, 1917, just a little over a month after the issuance of the Balfour Declaration. December 9 happened to be the Jewish date of 24 Kislev, the first day of Hanukkah, celebrating the rededication of the Temple of God. (See third article.) (cai.org)

Today, the Palestinian Authority works without ceasing to delegitimize, demonize and ultimately replace the Jewish state with a Muslim one. Its leaders declare that Jews never lived in Palestine, and most of the 1.8 billion Muslims in the world are convinced that this is truth. However, much to the PA’s dismay, archeologists are digging up on a regular basis all kinds of remnants of Israel’s ancient heritage in the land of the Twelve Tribes of Israel. The Balfour Declaration was the first legal document to physically resurrect this ancient nation—as foretold by Israel’s prophets thousands of years ago.

It is the Sovereign God who positioned men in places of authority and power, who knew the Bible. God’s plans will never be thwarted. Blessed are those who have eyes to see and ears to hear!