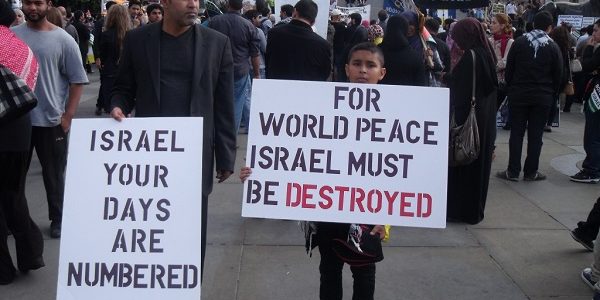 Would it happen again? Many Jews and Israel supporters are taking a hard look at the disturbing signs of our times, and asking if there are parallels to 1930s Germany. How did so many Jews miss the warning signs of the Holocaust? How do we interpret similar trends today?

Legal sabotage ensued as Hitler manipulated flaws in the Weimar Constitution. Article 48 specified that in an emergency, the president (a role Hitler usurped) could issue decrees without Reichstag (Parliament’s) approval. Since Article 48 failed to define “emergency,” it became a “back door” Hitler manipulated to take power legally, the BBC said.

Just one month after Hitler became chancellor on Jan. 30, 1933, a suspicious fire gutted the Reichstag building. The next day, using the fire as an excuse, the Nazis exploited Article 48 to suspend freedom of speech, press, assembly and association, privacy of communications, and the inviolability of the home from unlawful search and seizure.

Article 76, which required a two-thirds majority to amend the Constitution, posed another obstacle to Nazi control. They used the fire and suspended Constitutional freedoms to place political opponents in new concentration camps before the vote to amend the Constitution. Thus, in March 1933, an emergency decree established absolute Nazi authority, bypassing the Constitution and enabling Hitler to rule by decree without legislation or Reichstag approval. And that’s not to mention the elephant in the room—anti-Semitism.

The Miami Herald reported a secret, emergency martial-law plan to “suspend the U.S. Constitution,” turn U.S. control over to FEMA, and “appoint military commanders to run state and local governments.” According to Geopolitical Monitor, FEMA has more than 800 detainment camps in the United States, allegedly built for detaining illegal immigrants, though they have not been used for that purpose.

A 2013 Army Reserves training presentation listed ultra-Orthodox Jews, evangelical Christians and Catholics alongside Hamas, al-Qaida, and other “religious extremists.” The Army denied prior knowledge of the event. Several sources, one of whom received martial-law training in 2016 from a DHS-affiliated security company, said trainees were to go house-to-house and ask specific questions to determine if people are Jews or Christians, both of whom could be targeted as “domestic terrorists.”

It’s not a matter of whether a government is right or left, because the value of a Jewish—or any life—transcends political affiliation. In private conversations with law professor David Bernstein, Jewish organization professionals defined the “greatest threat to the security of the American Jewish community” as “changing demographics”— “a euphemism for a growing population of Arab migrants to the United States,” Bernstein said in The Washington Post. Yet liberal Jews do not express much concern about admitting large numbers of “refugees and immigrants from countries where extreme anti-Semitic sentiments are mundane.”

We should all be gravely concerned about what may happen if a dictator under the banner of some “-ism” insinuates himself into power. The mechanisms and precedents are already in place. If these indicators signal ultimate danger to Diaspora Jews, or if any are sitting on the fence, they should consider coming home to Israel, the only democracy in the Middle East—and the only safe haven from the anti-Semitism engulfing the world. There is no better time to make Aliyah.