Defense minister: Israel will retaliate against any provocation 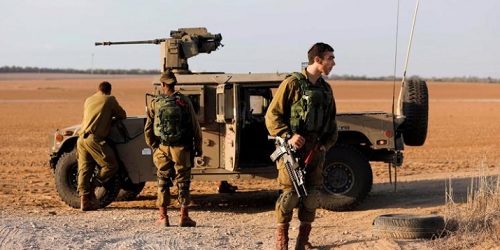 Israel is not interested in another conflict in the Gaza Strip but it “will not tolerate any infringement on its sovereignty and we will retaliate to any provocation,” Defense Minister Avigdor Lieberman said Tuesday, following the discovery and destruction of an Islamic Jihad terror tunnel dug under the Israel-Gaza Strip border.

Speaking with Israel Hayom, Lieberman commended the military’s handling of the tunnel, saying that the defense establishment “is following the situation in southern Israel very closely. We’re ready for any scenario.”

Israel believes that after seven of its operatives were killed in the tunnel blast, Islamic Jihad is likely to retaliate. Israeli defense officials believe the terrorist group may mount a limited reaction to exact a price from Israel while avoiding an overall security escalation.

The IDF has elevated the alert level on the Gaza border, as well as in several other locations. As a precaution, it was also decided to limit troop movements in certain areas near the security fence.

“The IDF’s operation neutralized a threat to the Israeli public. That was its purpose,” Eizenkot said. “This operation joins many others, both overt and covert, that IDF forces carry out and we will continue to do so to counter any threat, at any time and in any situation. The IDF continues to be prepared for any scenario and monitors terrorist elements in the Gaza Strip closely. Any violation of Israeli sovereignty will be met with determination, as we have done now.”

Political and defense sources said Israel would not tolerate any attack by Islamic Jihad. A message to that effect was reportedly relayed to Hamas in Gaza via Egypt, which over the past 24 hours has repeatedly urged restraint on both sides.

Sources said that Egyptian officials currently visiting Gaza as part of the Hamas-Fatah reconciliation negotiations spoke with Hamas and Islamic Jihad officials on the issue and stressed that Israel will hold Hamas responsible for any future escalation, even one triggered as a result of the actions of any of the other terrorist groups in the strip.

Israeli defense officials said the lack of immediate retaliation by Islamic Jihad over the tunnel’s destruction stemmed from Egyptian pressure and from Hamas’ strategic preference to prioritize the rapprochement with Fatah.

Hamas hopes a Palestinian unity deal will ease the dire economic situation in Gaza, and it is wary that any security escalation would torpedo the Palestinian negotiations and may lead to another conflict in the enclave.

In Gaza, thousands attended the funerals of the seven Islamic Jihad operatives killed Monday in the tunnel blast.

On Tuesday, two additional bodies were recovered from the rubble, bringing the death toll to nine. Several other bodies are believed to still be trapped in the collapsed tunnel, but Gaza’s emergency services announced they were suspending recovery efforts and turning the matter over to the International Red Cross.

“I call on Abu Mazen to suspend all political and security cooperation with the Zionist enemy. Only unity is important and Israel works in every way to prevent the Palestinian reconciliation,” he said.

Islamic Jihad vowed to avenge its operatives. A senior official said the group’s forces have been instructed “to be on high alert. Any understandings with the Zionist enemy are revoked.”