Luther and the Jews—500 years later 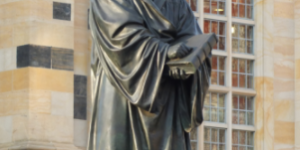 By Alon Goshen-Gottstein, Times of Israel—

All over the world, notice is taken of the 500th anniversary of Luther’s posting of his 95 Theses on the door of the church in Wittenberg, thereby launching the reformation. This has been an occasion for considering Luther and his contribution to society. One of the voices that is often heard, and which was repeated recently on Times of Israel, is that Luther should not receive the honor he receives in view of his anti-Semitism and how his thought has fed the ideology and workings of the Third Reich. Alan Dershowitz expresses this sentiment strongly:

It is shocking that Luther’s ignoble name is still honored rather than forever cursed by mainstream Protestant churches. The continued honoring of Luther conveys a dangerous message a message that was not lost on Hitler: namely, that a person’s other accomplishments will earn him a position of respect in history, even if he has called for the destruction of world Jewry. (Alan Dershowitz, Chutzpah, p. 107)

For the record, Luther never made such a call for destruction. But he certainly had many harmful recommendations.

Contrast Dershowitz with Rabbi Marc Tannenbaum, one of the most important 20th century Jewish voices engaged in dialogue with Christianity:

The task for us in this irenic time, this age of pluralism and growing dialogue, is to try to approach the issue of Luther and his teachings with something of the same method by which many Christians and Jews today approach the cumbersomeness of their inherited tradition. Our task always is to separate out the essential teachings of the faith which are healing and redemptive, productive of love and mutual respect, and simply to repudiate that of the past which is no longer relevant or appropriate and was a historical response for another time. If papal infallibility is not in place, all the more so for Luther. If there’s anything that should characterize the observance of the five hundredth birthday of Luther, I feel it should be the determination to face the bad in past tradition and to replace it by building a culture filled with caring, understanding and above all – knowledge of one another, not as caricatures and stereotypes, but as we are, committed Jews and Christians.(Tanenbaum, From the Past – A Present Challenge, p. 275.)