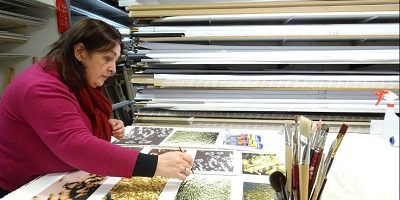 In November 2017, Yigal Amedi, the Chairman of the Arts & Culture Council at the Ministry of Culture will be engaged in the charitable mission at the Rambam Hospital in Haifa. In his capacity of the member of the International Advisory Board of The Rogatchi Foundation he will hand to the leadership of the Rambam Medical Health Centre special art donation, the 10-piece From the Window of Mercy collection of art works by Inna Rogatchi. All the works in the collection are created and produced as The Inna Rogatchi Lux Sei Photo Art ®, a special direction if fine art photography which aims to create the art work providing psychological comfort to viewers. This art of Inna Rogatchi belongs and ‘works’ quite successfully in many medical, social, cultural and public institutions in Finland, UK, Spain, Italy, Japan and now – in Israel.

The half of this collection is unique works while the other half are numbered and signed art prints of a very limited edition. The half of the collection has been produced by The Rogatchi Foundation specifically for this collection which is made in memory of Yenike Julia Rogatchi ( 1977-1989) who was a talented artist and who loved Israel devotedly.

Oded Mayer, the Rambam hospital Director for Marketing who was very helpful in the facilitating the donation has said: “The idea of this art donation has come as a very welcoming factor to us. It is vital to have warm, welcoming, or encouraging pieces of art at the medical premises, the pieces which would distract people from their worries in a nice way. Hence, the Inna Rogatchi’s art work on our walls will bring an amazing change that will affect the mood of our visitors and definitely will create a warmer environment for families and patients.” branch of the staunch supporters of Israel and the Jewish causes, for a special purpose, to support their ongoing care on the inhabitants of Haifa Home, the unique social institution not only in Israel, but global-wise. All residents of that warm and caring house for elderly are the Holocaust survivors.

“The institution and its history is so unique, and the care which ICEJ worldwide and their national branches are providing to those people is so sustaining, warm and touching that we felt that we just had to support this beautiful long-term human effort in the best way we could. We have donated four special art works, two by each of us, for a special fund-raising for the Haifa Home, and we did it in the memory of our both fathers whom we both have lost when they were quite young, Henrich Rogatchi ( 1925-1961) and Isaac Bujanover ( 1930-1987)” – says the artist Michael Rogatchi, the Chairman of The Rogatchi Foundation.

To boost the support for the ICEJ ongoing effort caring for the Haifa House residents, The Rogatchi Foundation has also started the new international campaign, Heart to Share. “Heart to Share is a partnering campaign in which we are addressing several thousands of our friends, colleagues and supporters all over the world, telling them on the background and purpose of this campaign and asking them to consider to join us in support of the ICEJ effort to maintain the life of the elderly  Holocaust survivors residing at the Haifa Home, to live with dignity and love,” – says Inna Rogatchi, the President of The Rogatchi Foundation. “There is never enough love and care in this world. The theme of the Holocaust is very close to us and our Foundation, we do feel about it in the way like it has happened right now. We do feel committed to the Holocaust survivors and to the maintenance of the memory on the Holocaust alive deeply”.

The Rogatchi Foundation special collectible art calendar for 2018 Melodies of Love which features stunning art works by Michael Rogatchi on two eternal themes, love and music, is also charitable action by the Foundation. Commemorating the Michael’ 65th birthday in January 2018, the calendar’s proceeds are going to be spent on the Foundation activities commemorating the Holocaust and on support of the Holocaust survivors in need, continuing  the one of the Foundation previous charitable campaigns, Sparks of Kindness.

During the autumn 2017, the Rogatchi family and the Rogatchi Foundation has made another significant art donation, this time for the Helsinki Jewish community and the Sarah Home for elderly in Finland. The Patriarchs and the Matriarchs, 10-piece art series of the museum-quality art replicas of the Michael Rogatchi’s famous The Forefathers collection, has been donated to the Club of the Jewish Community in Helsinki, and to the residents of the community’s Sarah House for elderly people. “ “We are very glad to be able to contribute to both young and elderly, to bring some of our art to the places of gathering of children and youth, and to the home of elderly in Helsinki. Donating to the both places at the same time aims to achieve certain harmony which is an essential principle of life. The meaning of this harmony is renewed every year at the time preceding the Jewish High Holidays. We are very glad to provide these beautiful works of art to the places where they will ‘do a good work’ and will do it for years to come”,- said Inna Rogatchi during the ceremony. Her husband Michael was also speaking on the vital connection between the art and charity: “The art works only if it speaks to and with people, if it enlightens their life, provokes their thoughts. It works if it does make the premises of life, in a broader term, charged with the additional, art-created dimension. From that point of view, I am very glad to be able to contribute into the daily life of our friends from the Helsinki Jewish community by the presence in their premises of my art works which had been made by reflecting on the core of the Jewish values”.  The Rogatchi Foundation donation to the Helsinki Jewish community has been done on the eve of the Rosh HaShanah ( Jewish New Year) 5778, and has been conducted in memory of the both artists’ families of Chigrinsky-Elovitch-Bujanover  and Reiss-Litowski-Rogatchi. The Rogatchi artistic family and The Rogatchi Foundation are supporting Israel and various Jewish causes during many decades, including the organising special International Art Solidarity Campaigns and Events, contributing to the Jerusalem Municipality and Yad Vashem, supporting the Jewish orphans, and contributing into the international support of the Jewish causes in many countries, including Finland, the Scandinavian and Baltic states, the European Union, the UK, USA, Australia, etc.

Inna Rogatchi is a notable fine art photographer and artist, and also internationally known writer, film-maker, scholar, historian and public figure. She is the author of The Lessons of Survival, internationally critically acclaimed film on Simon Wiesenthal, and many essays on the post-Holocaust. She is the third person and the first woman who was awarded The Patmos Solidarity Award for ‘the hard labour of memory, and her life-long mission for the sake of the Jewish people and the State of Israel”, and the Special Award for the Outstanding Contribution into the Arts and Culture by the New York Jewish Children’s Museum (together with her husband renowned artist Michael Rogatchi).  As a fine-art photographer and artist, she exhibits her works widely all over the globe. Inna is the winner of the IX Italian National Il Volo di Pegaso Arts and Literature Award, and is the author of three patent-pending original art techniques.  She is regularly invited as a special guest artist to many top international culture events, including the Venice Film Festival, international Music Collection festival in St Petersburg, Contemporary Art Festival in Rome ( Italy), and many others. Her special cultural & educational projects had been exhibited at the European Parliament and the Parliaments of Finland and Lithuania.  Her new exhibition and the cultural and educational Shining Souls. Champions of Humanity project is due to be opened at the Parliament of Finland in January 2018 where it will open the Finnish national commemoration of the International Holocaust Remembrance Day.

Michael Rogatchi  is the world-renowned artist, the master of the metaphorical expressionism, who had hold over 75 exhibitions worldwide and whose works belong to many leading institutions and private collections, including the New York Jewish Children’s Museum, the Laogai Museum ( Washington DC), the Jewish Art Museum ( London, UK), and many others. His art works also belong to many notable private art collections, including the ones of the Simon Wiesenthal’s family, Leonard Cohen’s family, maestro Evgeny Kissin’s and many others.

The new documentary film Dream, Memory, Love. Michael Rogatchi: Portrait of the Artist (C) telling on the artist’s life and art will be released in the beginning of 2018. Michael Rogatchi (C). Sarah. The Matriarchs. 2009. Art work from the donation to the Helsinki Jewish Community.

The artistic family lives and works in Finland and Italy and is frequent to Israel and the USA, having many ongoing projects around the globe.

The Rogatchi Foundation – www.rogatchifoundation.org – is the international cultural charitable organisation co-founded by the artistic couple and philanthropists Inna and Michael Rogatchi. The Foundation supports the cultural and moral heritage and has been involved in many international projects. Inna and Michael Rogatchi and their Foundation has been co-operating with many outstanding cultural figures of our times including the late Maestro Mstislav Rostropovich, Sir Paul and late Linda McCartney, great Maurice Bejart, Her Majesty Queen of Denmark Margrethe II, Maestro Evgeny Kissin, Oscar-winning ( for the non-fictional cinematography of the Schindler’s List) cinematographer Andrzej Jeziorek, and many others. The Rogatchis’ previous notable art donations in Israel include the famous Michael Rogatchi’s My Stones. Jerusalem painting to the Permanent Art Collection of the Municipality of Jerusalem; Inna Rogatchi’s films and materials to the Yad Vashem; Michael Rogatchi’s well-known painting Unforgiving to the Permanent Art Collection of the Israel Ministry of the Foreign Affair, and the other donations.  More information: The Rogatchi Foundation – www.rogatchifoundation.org