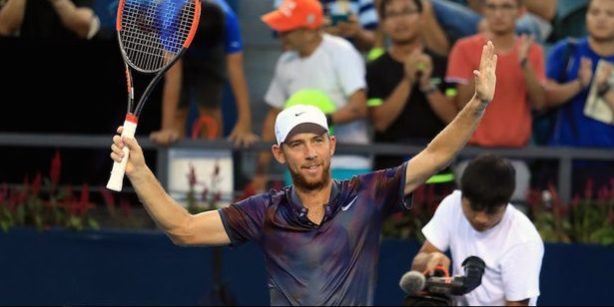 This past Friday afternoon, as millions of Jews worldwide were preparing themselves for the onset of Yom Kippur, Israeli tennis star Dudi Sela found himself standing on a court in Shenzhen, China, leading his opponent in the middle of a critical match.

After a nine-month drought, Sela had finally made it to the quarterfinals round in an Association of Tennis Professionals (ATP) tournament, earning not only greater prestige but also the promise of greater rewards should he advance.

But as the hands of the clock inched forward, and the sun began preparing to set, Sela did something that can only be described as truly remarkable.

In an unprecedented move, he put down his tennis racket and declared that he was forfeiting the contest, effectively removing himself from the competition.

It was neither fatigue nor indolence which lay behind his decision, but rather something far more noble. As a representative of Israel, the Jewish state, Sela made up his mind that he would not play on the holiest day on the Jewish calendar.

Through that simple yet surely difficult act, Sela etched his name in the pantheon of true Jewish sports heroes, in effect becoming the Israeli version of Sandy Koufax, the great, flame-throwing baseball pitcher who refused to play in Game 1 of the 1965 World Series because it coincided with Yom Kippur.

Like Koufax, Sela is said to be not particularly observant, but he does have something that sets him apart, and that is a healthy sense of Jewish pride.

“Dudi isn’t a religious man and he doesn’t usually fast on Yom Kippur,” said his brother Ofer, adding, “for the first time in his career he was forced to make this excruciating decision, which affects his ATP ranking and cost him tens of thousands of dollars.”

Noting that no one had compelled his brother to refrain from playing, Ofer declared, “He did it only because he respects Yom Kippur and the country which he represents.” What a refreshing dose of national dignity! Sure, Sela is not the first prominent Israeli sports figure to refuse to appear on the Day of Atonement.

At the 1988 Summer Olympics in Seoul, South Korea, the Israeli fencing team gave up its chance to earn a medal and stayed home because it would have meant competing on Yom Kippur.

Similarly, in 2010, Avram Grant, who was managing the British soccer team West Ham United, along with one his team’s defenders, Tal Ben-Haim, chose to miss a league game because it fell out on the holy day.

But what makes Sela’s act so noteworthy is that he dropped out while in the middle of a match, when his adrenaline was rushing and, like any good athlete, he was probably confident that victory was in the air. And for doing so, he deserves our admiration and support.

In truth, however, it should never have come to this.

The fact that the ATP did not have the foresight to take into account the holiest day on the Jewish calendar when originally scheduling the tournament is regrettable but perhaps understandable. But their lack of sensitivity in refusing to move the time of Sela’s game once they learned of the conflict is simply disrespectful and shameful.

In this regard, the ATP is not alone. As The Jerusalem Post reported on July 30, “some of Israel’s top judokas are in danger of missing out on next year’s world championships in Azerbaijan after they were recently scheduled on the week of Yom Kippur,” which will be on September 19 in 2018.

Moshe Ponte, the chairman of Israel’s Judo Association, is set to meet soon with Marius Vizer, president of the International Judo Federation, to ask that the date of the competition be moved, and one hopes that his request will be met with the receptivity and understanding that it deserves.

“This is a serious threat to Israeli judo,” Ponte said. “This can really hurt the athletes who want to qualify for the Olympics and also affect their draw in Tokyo,” he emphasized, adding that, “This problem requires diplomatic intervention. At the end of the day, we represent the country.”

Ponte is exactly right. This is not a matter of religious coercion but one of national pride and it is time for international sporting federations and councils to show more consideration and respect for Israel and its heritage.

After all, in December 2015, the United Nations formally recognized Yom Kippur as an official holiday, thanks in large part to the efforts of Israel’s UN Ambassador Danny Danon and his American colleagues. No official UN meetings may take place on the holy day.

If it is good enough for the UN, then there is no reason why the same principle cannot be applied to international sports competitions.

It may seem trivial, but in today’s world, many people invoke the word “hero” when referring to those whose exploits on the field stand out from the rest.

While shooting a ball through a hoop hardly compares with saving someone from a burning building, sports do resonate around the world and have a profound social and cultural impact.

And that alone is reason enough for Israel to press for international competitions not to schedule games for Israeli athletes on Yom Kippur.

For as Dudi Sela demonstrated on a Chinese tennis court last week, a true ace is one who not only knows how to wield his racket, but when to put it down and recognize that there are values of greater import worth upholding.