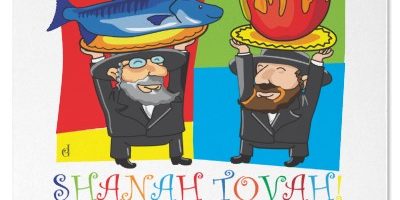 1. Rosh Hashanah (“the beginning of the year” in Hebrew), the Jewish New Year, is celebrated on the first day of the Jewish month of Tishrei (תשרי). Tishrei was a Babylonian term for launching the agricultural (creation) calendar, starting with the planting of seeds and the first rain.

3. Rosh Hashanah is announced, and celebrated – in a humble and determined manner – by the blowing of the Shofar (the ritual ram’s horn). The Hebrew spelling of Shofar, שופר, is a derivative of the verb שפר, which means to enhance, improve and succeed.

4. The shofar is the epitome of peace-through-strength. It is made from the horn of a ram, which is a peaceful animal equipped with strong horns to fend off predators. The numerical value of the Hebrew word for “ram,” איל, is 41 (א-1, י-10, ל-30), which is equal to the value of “mother” (אם, א-1, ם-40), who strongly protects her children. Rosh Hashanah prayers highlight motherhood, optimism and the pregnancies of Sarah, Rachel and Chana, who gave birth to Isaac, Joseph, Benjamin and Samuel, respectively. Noah – who led the rebirth of humanity/world – also features in Rosh Hashanah prayers.

5. Rosh Hashanah and the blowing of the Shofar symbolize and commemorate:

*Alarming humanity of pending positive and negative significant developments (e.g., deliverance and attacks);
*The blows of the Shofar tumbled the walls of Jericho, and intensified Judge Gideon’s posture of deterrence during his war on the Midianites;
*An ancient expression of “In God we trust.” The reaffirmation of faith in God as the Creator, the supreme king (kings were anointed to the sound of the Shofar) and judge (a day of judgment);
*The bonding with God and fellow human beings;
*The creation of the first human-being, Adam, on the sixth day of the Creation;
*The annual judgment day, soul-searching and behavioral enhancement.
*The opening of Noah’s Ark following the flood;
*The almost-sacrifice of Isaac – which was avoided by God’s angel and a ram (prohibiting further human sacrifices!) – and the Biblical (Abrahamic) Covenant;
*The three Jewish Patriarchs, Abraham, Isaac and Jacob, and the Prophet Samuel (the latter inspired Thomas Paine, the author of “Common Sense,” the cement of the American Revolution), were conceived/born during the month of Tishrei, “the month of the strong ones ” (Kings A, 8:2);
*The release of Joseph from an Egyptian prison;
*Blows of the Shofar – along with thunders and lightning – were heard when Moses (“the humblest of all human-beings”) received the Ten Commandments on Mount Sinai, a non-impressive, non-towering mountain;
*The Jubilee (Leviticus 25:10) was a role model of liberty for the American early Pilgrims and Founding Fathers. The Jubilee was announced during ancient time – every 50 years – by the blowing of the Shofar, ushering the deliverance from spiritual and physical slavery (release of slaves and land). It inspired the anti-slavery Abolitionist movement in the USA. Jubilee – “Yovel” (יובל) in Hebrew – is a synonym for Shofar (the ram’s horn);
*The reconstruction of the Second Temple;
*The ingathering (Aliyah) of Jews to the Jewish Homeland;
*Optimism in the face of adversity.
*Genuine repentance and rectifying one’s behavior;
*The fallibility of all human-beings, starting with Adam and including Moses;
*Humility and modesty as a critical attributes, which minimize wrong-doing;
*The “ten days of awe/repentance” are initiated on Rosh Hashanah and sealed on Yom Kippur, ten days later;
*The blowing of the Shofar constitutes a moral wakeup call, providing an expressway for prayers.

6. Rosh Hashanah was conceived by Jewish sages, during the Second Temple period, referring to the Biblical “day of blowing the shofar” and “the day of commemorating the blowing of the shofar” (Leviticus 23:23-25, Numbers 29:1-6). Commemoration is a central Jewish value – a prerequisite for national cohesion, survival, an enhanced future and refraining from past critical errors, while forgetfulness spells ignorance, loss of critical values and lessons, and therefore the repetition of past errors.

7. The Hebrew word “Rosh” means “beginning,” “first,” “head,” “chief.” The Hebrew letters of Rosh (ראש) constitute the root of the Hebrew word for Genesis, “Be’re’sheet” (בראשית), which is the first/lead word in the Bible. Just like the Creation, so should the New Year (and human actions) launch a thoughtful, long-term – not a hasty – process. Rosh Hashanah is celebrated at the beginning of the Jewish month of Tishrei, which means beginning/Genesis in ancient Acadian. The Hebrew spelling of Tishrei (תשרי) is also included in the spelling of Genesis (בראשית).

8. Rosh Hashanah is one of four Jewish New Years: (a) the anniversary of the Creation, the beginning of the Jewish civil calendar (5,778) and the seasons, the setting of the Sabbatical (7th) and Jubilee (50th) years and the time for calculating the annual tithe (10%) on vegetable and grains. (b) The first day of the month of Nissan initiates the three Jewish pilgrimages/festivals (Passover, Pentecost and Tabernacles) and the measuring of the reign of ancient kings. (c) The first day of the month of Elul initiated the preparations for Rosh Hashanah and the New Year for animal tithes in ancient Israel. (d) The 15th day of the month of Shvat is the new year of the trees, which are role-models of humility, tenacity and growth for human-beings.

May the New Year, 5778, be top heavy on modesty, humility, challenge and gratification.