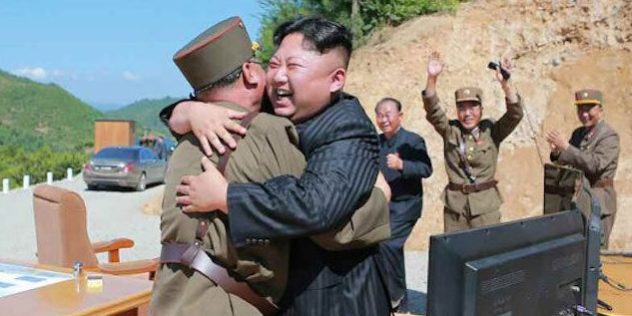 North Korea has, for the first time, threatened to wage an EMP (electromagnetic pulse) attack against the United States. Such an attack has the potential to cause catastrophic damage to North America, Canada, the West, and many of its neighbors.
North Korea threatens to wipe out the United States on a regular basis through its state media. However, this is the first time North Korea has openly threatened to use an EMP weapon.

According to the Associated Press, shortly after North Korea launched its sixth nuclear test using an H-bomb, the “Hermit Kingdom’s” leader Kim Jong-un issued a statement through its state-run Korean Central News Agency (KCNA) claiming the weapon “is a multi-functional thermonuclear nuke with great destructive power which can be detonated even at high altitudes for super-powerful EMP (electromagnetic pulse) attack according to strategic goals.”

Kim reportedly claimed that “all components of the H-bomb were homemade … thus enabling the country to produce powerful nuclear weapons as many as it wants.”

Breitbart News reported in June that “an EMP attack can be caused by the sun, by a nuclear EMP (NEMP), or a non-nuclear electromagnetic pulse (NNEMP).”

An NEMP is an abrupt pulse of electromagnetic radiation that occurs as a result of a nuclear explosion. An NNEMP is virtually the same except it does not include the nuclear component. The currents caused by these charges the atmosphere with electromagnetic waves that travel down onto the earth’s surface at super speeds hitting everything within their line of sight, sending high-voltage energy through the electricity grid and frying them, causing massive disarray.

Anthony Furey’s book Pulse Attack: The Real Story Behind the Secret Weapon That Can Destroy North America is the first of its kind to outline the A-Z effects of a potential EMP attack on North America. The book also presents several simple and straightforward ways North America can protect against such a devastating scenario.

Furey is a national columnist for the Toronto Sun and a fellow at True North Initiative, a Canada-based think tank dedicated to advancing sound immigration and security policies.

“I wrote the book and of course it talks about how this could be a possibility for North America,” Furey told Breitbart News. “But I would have always preferred that not be true. And then I read the statement and my jaw just dropped.”

North America’s grid is currently not protected against an EMP disruption or attack. Furey told Breitbart News that this recent statement from North Korea will likely increase public interest in the potential for an EMP attack. “And politics is, of course, downstream from culture. It will change the way we look at the issue culturally because for a long time there were people who were dismissive of it” by downplaying the probability of an EMP attack.

Furey noted how “particularly over the last six months, analysts have underestimated North Korea’s abilities. And right now, the main underestimation is that, sure, they have some degree of ICBMs, sure they have some degree of nukes and some degree of miniaturized nukes. They just don’t have the guidance systems and the precision to do it. The problem with an EMP attack – or, from the perspective of someone using it, the benefit of an EMP attack – is you don’t need as much precision. You’re just detonating it above a general area. Whereas, if you want to strike a target, you have to get within a few kilometers of it. That is not the case with EMP.”

Furey noted that, if the Koreans can fly over Japan or any other nation, they can fly and detonate an EMP over it. Furey, who is Canadian, noted that the Canadian government is also not prepared for an EMP attack.

Protecting North American’s electrical grid against the most devastating consequences of an EMP disruption or attack is simple and would require, at its most basic, a minimal amount of resources. State by state protections are likely.

In his book, Furey notes that former President Obama released several hundreds of millions of dollars to harden the Cheyenne Mountain Complex against an EMP attack. “President Obama was able to sign onto something, probably in a very implicit small way; there wasn’t large fanfare about it. But there has been movement on it. So I think it’s completely reasonable to expect movement from President Trump on an executive level and definitely from Congress.”