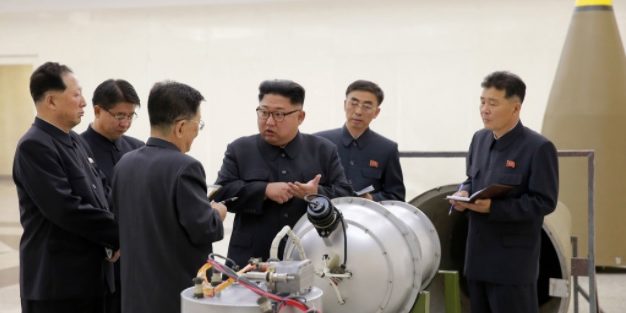 North Korea conducted its sixth and most powerful nuclear test on Sunday, which it said was a successful detonation of an advanced hydrogen bomb, in a dramatic escalation of the isolated state’s standoff with the United States and its allies.

The announcement from Pyongyang came a few hours after international seismic agencies detected a man-made earthquake near the North’s test site, which Japanese and South Korean officials said was around 10 times more powerful than the tremor picked up after its last nuclear test a year ago, and reportedly shook buildings in China and in Russia.

There was no independent confirmation that the detonation was a hydrogen bomb rather than an atomic device.

The test was carried out at 12:29 p.m. local time at the Punggye-ri site where North Korea has conducted nearly all of its past nuclear tests. Officials in Seoul put the magnitude at 5.7, while the U.S. Geological Survey said it was a magnitude 6.3.

North Korea’s state-run television broadcast a special bulletin Sunday afternoon to announce the test. It said leader Kim Jong Un attended a meeting of the ruling party’s presidium and signed the go-ahead order. Earlier in the day, the party’s newspaper ran a front-page story showing photos of Kim examining what it said was a nuclear warhead being fitted onto the nose of an intercontinental ballistic missile.

North Korea in July test-launched two ICBMs that are believed to be capable of reaching the mainland United States. That would be a major step forward for Pyongyang, which says its missile development is part of a defensive effort to build a viable nuclear deterrent that can target U.S. cities.

China’s Foreign Ministry said in a statement that the Chinese government has “expressed firm opposition and strong condemnation” to the test and urged North Korea to “stop taking erroneous actions that deteriorate the situation.”

The White House said Trump spoke with Abe regarding “ongoing efforts to maximize pressure on North Korea.” But the statement did not say whether the conversation came before or after the North’s latest test.

The options they have to pressure Pyongyang would appear to be limited. Further economic and trade sanctions, increased diplomatic pressure and boosting military maneuvers or shows of force would likely all be on the table.

The U.S. State Department had no immediate reaction.

The Russian Foreign Ministry said it was deeply concerned about a reported nuclear test by North Korea.

The ministry said on its website that the test was a defiance of international law and deserved condemnation. It urged all sides involved to hold talks, which it said was the only way to resolve the Korean peninsula’s problems.

“Today’s nuclear test by the Democratic People’s Republic of Korea is an extremely regrettable act. … Once again, I strongly urge the to fully implement all relevant resolutions,” Yukiya Amano, the head of the International Atomic Energy Agency. “The Agency continues to closely follow developments in the DPRK’s nuclear program, which is a matter of grave concern.”

The Comprehensive Test Ban Treaty Organization, which monitors seismic and radionuclide data worldwide, said the explosion was stronger than previous ones and was located at the site of earlier nuclear tests.

“If confirmed as a nuclear test, this act would indicate that the DPRK’s nuclear programme is advancing rapidly,” the CTBTO’s Secretary General Lassina Zerbo said.

The CTBT bans all nuclear explosions but it will only enter into force if all countries with advanced nuclear technology ratify it. The outstanding nations are China, Egypt, North Korea, India, Iran, Israel, Pakistan and the United States.

“I sincerely hope that this will serve as the final wake-up call to the international community to outlaw all nuclear testing by bringing the CTBT into force,” Zerbo said.

The nuclear test is the North’s first since U.S. President Donald Trump assumed office in January. Trump has been talking tough with the North over its stepped-up missile tests, including a comment that Pyongyang would see fire, fury and power unlike any the world had ever witnessed if it continued even verbal threats.

North Korea conducted two nuclear tests last year, the last nearly a year ago, on the Sept. 9 anniversary of the nation’s founding. It has been launching missiles at a record pace this year. It conducted its most provocative test yet last month, in response to ongoing U.S.-South Korea military exercises, when it fired a potentially nuclear-capable midrange missile over northern Japan.

It said that launch was the “curtain-raiser” for more activity to come.

The photos released earlier Sunday showed Kim talking with his lieutenants as he observed a silver, peanut-shaped device that the state-run media said was a thermonuclear weapon designed to be mounted on the North’s Hwasong-14 ICBM.

The North claims the device was made domestically and has explosive power that can range from tens to hundreds of kilotons. Outside experts suggested the yield of the device tested Sunday might be in that ballpark, though closer to the lower range. For context, the bomb dropped on Hiroshima by the United States had a 15-kiloton yield.

North Korea’s nuclear and missile program has made huge strides since Kim rose to power following his father’s death in late 2011.

Its recent activity has been especially bold.

Under third-generation leader Kim, North Korea has been pursuing a nuclear device small and light enough to fit on a long-range ballistic missile, without affecting its range and making it capable of surviving re-entry into the Earth’s atmosphere.

“The H-bomb, the explosive power of which is adjustable from tens kiloton to hundreds kiloton, is a multifunctional thermonuclear nuke with great destructive power which can be detonated even at high altitudes for superpowerful EMP attack according to strategic goals,” the North’s official Korean Central News Agency said. “All components of the H-bomb were homemade and all the processes … were put on the Juche basis, thus enabling the country to produce powerful nuclear weapons as many as it wants.”

Kim, who visited the country’s nuclear weapons institute, “watched an H-bomb to be loaded into new ICBM” and “set forth tasks to be fulfilled in the research into nukes,” KCNA said.

Juche is North Korea’s homegrown ideology of self-reliance that is a mix of Marxism and extreme nationalism preached by state founder Kim Il Sung, the current leader’s grandfather. It says its weapons programmes are needed to counter U.S. aggression.

But as North Korea offered no evidence for its latest claim, and Kim Dong-yub, a military expert at Kyungnam University’s Institute of Far Eastern Studies in Seoul, was sceptical.

“Referring to tens to hundreds of kilotons, it doesn’t appear to be talking about a fully fledged H-bomb. It’s more likely a boosted nuclear device,” Kim said, referring to an atomic bomb which uses some hydrogen isotopes to boost explosive yield.

Tensions on the Korean peninsula have been high since last month when North Korea threatened to launch missiles into the sea near the strategically located U.S. Pacific territory of Guam after Trump said Pyongyang would face “fire and fury” if it threatened the United States.

Trump and Abe spoke by phone and said that in face of an “escalating” situation with North Korea that close cooperation between their countries and with South Korea was needed, Abe told reporters.

“The two leaders reaffirmed the importance of close cooperation between the United States, Japan and South Korea in the face of the growing threat from North Korea,” the White House said in a statement. “President Trump noted that he looks forward to continued trilateral coordination on the margins of the United Nations General Assembly.”

The United States has repeatedly urged China, the North’s sole major ally, to do more to rein in its neighbor.

Experts and officials have said North Korea could conduct its sixth nuclear test at any time, and that the reclusive country has maintained a readiness at its nuclear test site to conduct another detonation.

U.S. officials said that while North Korea has had parts in place for a nuclear detonation going back several months, no new activity had been seen recently at its known nuclear test site in Punggye-ri in its northeastern region.

North Korea last year conducted its fourth and fifth nuclear tests, saying the fourth in January 2016 was a successful hydrogen bomb test, although outside experts say the claim has not been proved.

Earthquakes triggered by North Korean nuclear tests have gradually increased in magnitude since Pyongyang’s first test in 2006, indicating it is steadily improving the destructive power of its nuclear technology. Its fifth nuclear test in September 2016 was measured to be possibly North Korea’s biggest detonation ever, but the earthquake it caused was still not believed to be big enough to demonstrate a thermonuclear test.

Trump and South Korean President Moon Jae-in agreed over the weekend to revise a joint treaty capping the development of the South’s ballistic missiles, Moon’s office said on Saturday, amid a standoff over North Korea’s missile and nuclear tests.

Trump also gave “conceptual” approval to the purchase by the South of billions of dollars of U.S. military hardware, the White House said.

The South wants to raise the missile cap to boost its defenses against the reclusive North, which is pursuing missile and nuclear weapons programs in defiance of international warnings and U.N. sanctions.

“The two leaders agreed to the principle of revising the missile guideline to a level desired by South Korea, sharing the view that it was necessary to strengthen South Korea’s defense capabilities in response to North Korea’s provocations and threats,” South Korea’s presidential Blue House said.

South Korea’s development of its ballistic missiles is limited to range of 800 kilometers (500 miles) and payload weight of 500 kilograms (1,100 pounds) under a bilateral treaty revised in 2012.

South Korea has said it wants to revise the agreement to increase the cap on the payload.

The two countries agreed to the cap as part of a commitment to a voluntary international arms-control pact known as the Missile Technology Control Regime, aimed at limiting the proliferation missiles and nuclear weapons.

The two leaders pledged to continue to apply strong diplomatic and economic pressure on North Korea and to make all necessary preparations to defend against the growing threat by the North, the White House said. The statement did not mention the voluntary bilateral agreement but said the two leaders agreed to strengthen their defense cooperation and South Korea’s defense capabilities.

Trump “provided his conceptual approval of planned purchases by South Korea of billions of dollars in American military equipment,” the White House said.

Trump, who has warned that the U.S. military is “locked and loaded” in case of further North Korean provocation, reacted angrily to the latest missile test, declaring on Twitter that “talking is not the answer” to resolving the crisis.