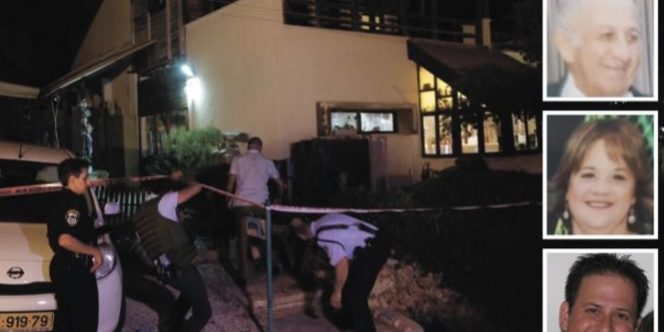 The leader of Hamas, the Islamic terrorist group that rules the Gaza Strip, on Sunday praised the Palestinian terrorist who stabbed three Israelis to death in their Samaria home on Friday evening.

Yosef Salomon, 70, his daughter Chaya, 46, and son Elad, 36, were murdered in the family home in Halamish, northwest of Ramallah, as they were eating their Shabbat eve dinner. Yosef’s wife, Tova, 68, was moderately wounded. During the attack, Elad’s wife fled upstairs with their children and barricaded them in a bedroom.

The attacker, Hamas sympathizer Omar al-Abed, from the village of Kaubar, was shot and wounded by an off-duty Israeli soldier and is now in Israeli custody.

In a phone call to the terrorist’s father on Sunday, Ismail Haniyeh called the attack “heroic” and said Abed had “lifted the heads of the nation high.”

“This act of terrorism was committed by a beast incited by wild hatred. Security forces are doing their utmost to maintain security and to this end will take all necessary measures.”

Following the attack, the IDF carried out several raids in Palestinian villages in Judea and Samaria, arresting 29 people, including nine Hamas members.