‘Anti-Zionism is a new form of anti-Semitism,’ French leader says 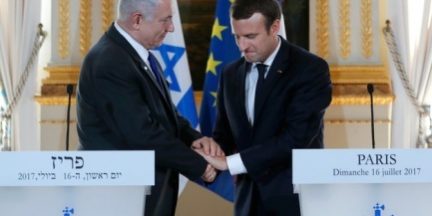 French President Emmanuel Macron on Sunday denounced France’s collaboration in the Holocaust, lashing out at those who negate or minimize the country’s role in sending tens of thousands of Jews to their deaths. He also condemned anti-Zionism as a new form of anti-Semitism and vowed to fight both.

Macron and Prime Minister Benjamin Netanyahu attended a ceremony commemorating 75 years since the Vel’ d’Hiv roundup, the mass arrest of 13,152 French Jews in July 1942 as part of the Nazi effort to eradicate the Jews of France.

“Time does its work. Archives open; the truth comes out. It’s stark, irrevocable. It imposes itself on us all. … It is indeed France that organized . Not a single German ,” he said. “It was indeed France. And thus 13,152 people of the Jewish faith were dragged from their homes between the 16th and 17th of July, 1942, to their deaths. Among them, 4,115 children between ages of 2 and 6, whom we are especially honoring today.”

Macron dismissed arguments by French far-right leaders and others that the collaborationist Vichy regime did not represent France.

“It is convenient to see the Vichy regime as born of nothingness, returned to nothingness,” he said. “Yes, it’s convenient, but it is false. We cannot build pride upon a lie.”

Later, in a clear reference to far-right leader Marine Le Pen, Macron denounced “politicians who are prepared to reverse the truth. … We will never surrender to the messages of hate; we will not surrender to anti-Zionism, because it is a reinvention of anti-Semitism.”

French Jewish leaders hailed Macron’s speech Sunday, while critics railed at him online, where renewed anti-Semitism has flourished. Macron pledged to fight such racism, and called for a thorough investigation into the recent killing of a Parisian woman that is believed to be linked to anti-Jewish sentiment.

Speaking at the ceremony, Netanyahu praised French citizens who protected Jews during World War II and warned against the rise of new extremist forces in Europe.

“Seventy-five years ago, a heavy darkness descended on this City of Lights. The Nazis and their collaborators … shattered the lives of thousands of French Jews at Vel’ d’Hiv. It seems that the values of the French Revolution — liberty, equality and fraternity — these values were crushed, crushed brutally under the boot of anti-Semitism. Yet we must say, and we heard it today as well, we must say that not all was dark.

“On behalf of the State of Israel, on behalf of the Jewish people, I salute the noble French citizens who at great risk to their own lives saved their Jewish compatriots. … This is a special heroism. We have known in Israel a lot of heroism, as have you here in France. This is different heroism. There is heroism in battle, in pitting one’s life to save others. But the heroism of the people who saved Jews involved putting their families at risk, putting their children, their wives, their husbands, at the risk of execution.

“After the horrific Second World War, France built itself anew to a thriving successful democracy of enterprise and culture. So did the Jews of France. … Out of the ash of destruction, we established the Jewish state. And it is the strength of Israel that is the one certain guarantee that the Jewish people will never undergo a Holocaust again. Never again. We will never let it happen again.

“Recently we have witnessed a rise of extremist forces that seek to destroy not only the Jews, but of course the Jewish state as well, but well beyond that. They wish to destroy anyone that stands in their way — Jews, Christians, Muslims, who suffer the brunt of their savagery. Mr. President, two days ago in Nice, you said that this was a war of civilizations. I fully agree. Militant Islam wants to destroy our common civilization. The militant Shiites led by Iran, the militant Sunnis led by ISIS — both seek to vanquish us. They seek to destroy Europe.

“It may not be obvious today, but it is completely obvious for anyone who listens to what they say, what they preach, what they teach their disciples, what they teach their children. They must vanquish, overcome, subdue, and ultimately eliminate European civilization. Israel is merely the first Western target that stands in their way. Militant Islamists do not hate the West because of Israel. To the contrary, they hate Israel because of the West, because they rightly see in Israel a forward bastion of our common values of freedom, humanism, democracy. They try to destroy us, but also they try to destroy you, and France is a leading power in the world, a leading democracy, so it is not being spared either. In Nice, in Paris, and elsewhere, savage terrorists brutally murdered French citizens. They have also targeted French Jews in Toulouse, in the Hyper Cacher here in Paris, and recently, with the horrific murder of Sarah Halimi, of blessed memory.”