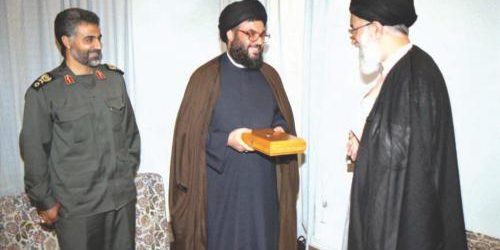 In a speech marking al-Quds Day, as established by Ayatollah Khomeini to identify with the Palestinian struggle on the last Friday of the month of Ramadan, Hizbullah leader Hassan Nasrallah threatened that in the next war with Israel he would open the borders of Lebanon to tens of thousands of fighters from Yemen, Afghanistan, Pakistan, Iran, and Iraq.

In effect, Tehran received an open invitation to fight Israel with the “Shi’ite Legion” which was established under the command of the Iranian Revolutionary Guards’ Quds Force commander, Qassem Soleimani, who is now fighting in Iraq and Syria.

Nasrallah’s words put an end to the so-called “national” claim by Hizbullah that the national consensus in Lebanon is based on the holy triangle of people-resistance-army. This claim supposedly unites Lebanon and grants Hizbullah legitimacy for its existence as a military militia. Furthermore, Nasrallah demonstrates with his words and actions contempt for the basic component of the Lebanese state, that being its borders. First, he violated the border to send troops to war in Syria on the pretext of defending the Shi’ite holy sites in Damascus. Second, Nasrallah declared after the assassination of Samir Kuntar, a terrorist released by Israel, the expansion of the borders of the conflict with Israel from Nakura, on the Mediterranean coast in the west, to the Syrian Golan Heights in the east.

Now he is threatening to violate Lebanon’s border once again toward Israel in the south, and he is inviting foreign, non-Lebanese, forces to take part in the war with Israel.

Nasrallah’s words come as intensive Iranian military activity is taking place on Lebanese soil. In addition to the Iranian advisors preparing Hizbullah for the next war with Israel and the military advisors who maintain the short and long-range missiles directed against Israel, Iran has established an extensive military industry based on missile manufacturing and production of other weapons.

An aide to the Revolutionary Guard’s commander noted in this context that hundreds of Lebanese and foreign experts had been trained for these projects at the Imam Hussein University in Tehran. It was also reported that the factories were built at a depth of about 50 meters and are protected from aircraft attack. In addition, the rocket components are manufactured in a number of factories to make it difficult to damage the production process. Only in the end are they assembled as one weapon. These reports by the Kuwaiti newspaper al-Jarida on March 11, 2017, received public confirmation from highest Israeli military commanders.

The explanation that Iran established military industries in Lebanon to overcome Israeli interdiction of weapon convoys from Syria to Lebanon is only partially true. It is reasonable to assume that the Iranian military industries in Lebanon are intended to allow Tehran to operate self-sufficiently and independently of a disintegrating Syria, to be as close as possible to strategic targets in Israel, and to act independently in the event of an inability to transfer missiles to Lebanon.

Israeli authorities issued a warning to Hizbullah over the “rocket manufacturing installations in Lebanon mainly situated in Hizbullah strongholds.” It is significant that the Lebanese newspaper Al Nahar reported on the Israeli warnings. “Israel’s Defense Minister Avigdor Liberman warned ‘Hizbullah over the development of Iranian rocket manufacturing installations inside Lebanon,’” wrote the Lebanese publication, citing Israeli reports. “The reports added that the Israeli security services are ‘seriously’ studying the possibility of ‘destroying the Iranian weapons factory.’”

Brig.-Gen. (ret.) Dr. Shimon Shapira is a senior research associate at the Jerusalem Center for Public Affairs. He served as Military Secretary to the Prime Minister and as Israel Foreign Ministry chief of staff. He edited the Jerusalem Center eBook Iran: From Regional Challenge to Global Threat.