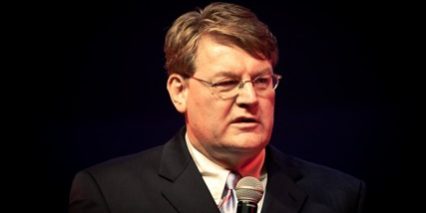 The strategic importance of Christian Zionism was featured this week at the 2017 Herzliya Conference, one of Israel’s most prominent annual policy summits.

Organizers describe the conference, which is hosted by the Institute for Policy and Strategy at the IDC Herzliya research college, as a platform that “facilitates and encourages an informed debate on the most pressing issues on the national and international agendas.”

Leading Israeli officials routinely address the Herzliya gathering, but one session stood out from the rest due to how it opened: with prayer.

“Heavenly Father, we thank you for this time of engagement together between Israel and the Jewish people and Christian friends…we just ask that this be productive and effective,” said David Parsons, vice president and senior spokesman for the International Christian Embassy Jerusalem (ICEJ), an organization that states it “represents millions of Christians, churches, and denominations to the nation and people of Israel.”

Parsons told JNS.org, “We’re excited to be here for the second year in a row, taking part in the Herzliya Conference, and being able to communicate the love of Christians to Israeli decision makers, policy makers, academics and all. It’s a great privilege for us and we hope it has real practical impact for the state of Israel.”

Evangelical Christianity is “the fastest-growing faith movement in the world,” boasting as many as “700 million believers” and adding 50,000 new adherents daily, with each new “believer” representing another potential advocate for Israel, Parsons said.

“Over the past decades, the global evangelical community has become the fastest growing stream of faith in the world…in the coming decades, it is believed that can even bypass Islam…the majority of evangelicals today are Asians, Africans and Latin Americans,” Buehler said.

Five continents were represented by an ICEJ regional affiliate during the June 21 roundtable discussion hosted by the Christian Zionist group in Herzliya. The representatives addressed the challenges faced by their communities, how to increase cooperation with Israel and the reasoning behind their staunch support of the Jewish state.

“The Jewish people have been a blessing for Christianity,” said Dr. Jerry Johnson, president and CEO of the National Religious Broadcasters. “Christianity came out of Judaism.”

Dr. Luis Fernandez Solares, ICEJ’s Guatemala national director, expressed concern regarding the challenges faced by South American Christians who openly express solidarity with Israel in countries “governed by leftist leaders,” who have close relations with Arab nations as well as Iran and the Palestinians.

Solares suggested that evangelical institutions increase their cooperation across countries where they are represented, in addition to ramping up ties with Israeli embassies and local Jewish communities. Israel should foster closer relations with evangelical communities in Latin America and “ask them to pray for Israel and place Israeli flags in their congregations,” he added.

Dr. Gottfried Bühler, president of ICEJ’s German branch, conveyed his dismay as a German with “representatives of my own country, who just a few weeks ago, were more than willing to meet BDS activists just one day after laying a wreath at Yad Vashem .” Bühler was referring to a diplomatic dispute between Israel and Germany in late April.

“The new face of anti-Semitism, we can call anti-Israelism…but there is a growing positive trend in many Christian churches across Europe. Not only are growing numbers of Christians becoming more aware that the roots of their faith are in Judaism…but they are also ready to take action,” said Bühler.

Indeed, under Bühler’s leadership, Christians in Germany are taking action. In May, more than 26,000 signatures were collected by ICEJ-Germany to convey German Christians’ concern over the European Union’s labeling of Israeli goods produced in the disputed territories. Bühler personally delivered the petition to the Federal Ministry of Economics in Berlin.

Dr. Rev. Abdou Maiga, ICEJ’s Senegal national director and special coordinator for west Africa, was born a Muslim but went on to become an evangelical leader in Africa. Maiga briefed the room on Israel-Africa relations, and commended Prime Minister Benjamin Netanyahu’s recent efforts to expand Israeli influence on that continent.

Maiga said he was personally involved “in lobbying Mali to reopen ties with Israel on behalf of ICEJ,” and said three times in a row to thunderous applause, “Israel has frankly more friends than enemies in Africa!”

“We at ICEJ are working under the radar of the international media, and even in some cases Israeli authorities are not even aware of our efforts on their behalf…Our countries are blessed by blessing Israel,” Maiga said.

Joseph Chou, national director in Taiwan for ICEJ, said there are approximately 200 million evangelical Christians in Asia, adding, “My conservative estimation is that there are at least 20 million Christians who are praying for Israel in their morning, weekly and monthly prayer meetings.”

Last year, Chou’s branch of ICEJ supported the immigration of 139 people to Israel, which is “just one example of our support,” he said.

“We don’t just pray for Israel…we believe we should do something more. In Taiwan, we organize many seminaries and conferences because we believe it’s very important to educate people about Israel,” he said.

Akiva Tor, head of the Bureau for World Jewish Affairs and World Religions at Israel’s Foreign Ministry, said Israel “sees the success of Christian Zionism as an important national interest.”

He added, “Stopping the depopulation of Christians in the region is a strategic interest of Israel. This is something the international community is not addressing sufficiently.”