The White House’s plan for peace in the Middle East 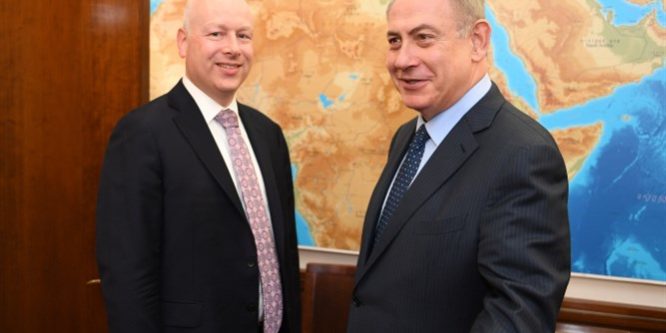 US Middle East Envoy Jason Greenblatt spoke to senior Israeli officials and representatives of the Palestinian Authority about the US plan for negotiating a final status agreement, Channel 20 reported.

Among the items mentioned in the US proposal were: slowing building in Judea and Samaria, creating security arrangements in partnership with Jordan and the Gulf states, and normalizing Israel’s relations with the Arab countries.

According to the plan, negotiations will begin in September, following the meeting between US President Donald Trump, Israeli Prime Minister Binyamin Netanyahu, and Palestinian Authority Chairman Mahmoud Abbas in Washington, D.C.

The plan also requires both sides to work towards peace.

The US will help consolidate security arrangements between Israel and the PA, as well as consolidate a joint effort to fight terror. Jordan and the Gulf states will also work to help radical Islamic terror.

Each side will commit to building a peaceful future and a culture which works towards co-existence.

The Arab nations will agree to normalize relations with Israel starting during the negotiations, in return for Israel reducing the number of housing units built in Judea and Samaria. Such an agreement would help the Israeli economy and encourage the Israeli public to be more willing to accept territorial compromise and the expulsion of Jews from various towns in Judea and Samaria.

According to the report, Trump will leave discussion on Jerusalem and the refugee crisis for the second stage of negotiations, after the sides have built a level of mutual trust.

The Israeli government insists the US plan include sections which obligate the PA to cease incitement to and encouraging of violence, and to cease payments to terrorists and their families.