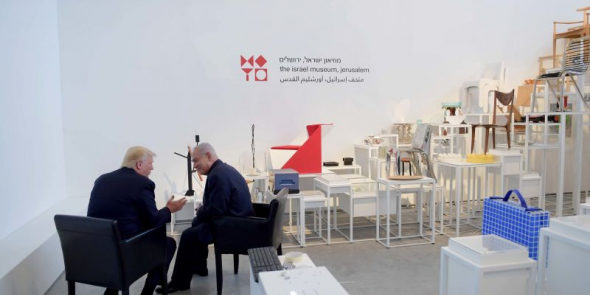 During his meeting with Palestinian Authority (PA) President Mahmoud Abbas Tuesday and in speeches throughout the day, President Donald Trump notably omitted any mention of a two-state solution to the Israeli-Palestinian conflict.

Trump rebuked Palestinian leaders in a joint press conference with Abbas in Bethlehem, saying, “Peace can never take root in an environment where violence is tolerated, funded and even rewarded,” referring to stipends the PA pays to terrorists and their families.

Noting how Trump did not mention Palestinian statehood or a two-state solution in his public remarks with Abbas, Member of Knesset Ofir Akunis (Likud) said, “This is a huge achievement, on a historic scale, and a big win for anyone opposed to the mistaken and dangerous idea of a Palestinian terror state in the heart of Israel.”

In his meetings with Israeli Prime Minister Benjamin Netanyahu and President Reuven Rivlin Monday, Trump also discussed the peace process without mentioning a two-state solution. Further, the U.S. leader did not bring up the issue of sovereignty over the city of Jerusalem, which both Israel and the Palestinians claim as their capital.

Trump initially expressed openness to alternatives to a two-state solution in February, during a meeting with Netanyahu at the White House. Breaking with American presidential administrations’ longstanding exclusive support for two states, Trump said at the time, “I’m looking at two state and one state, and I like the one that both parties like…I can live with either one.”

At the same time, the White House sent mixed signals regarding the Trump administration’s official policy on the conflict, seemingly acknowledging the existence of “Palestine” while simultaneously recognizing Israeli sovereignty over Jerusalem.

In its official itinerary for Trump’s visit to Israel and the disputed territories, the White House referred to Abbas as the leader of “Palestine,” which could be construed as a form of recognition of an independent Palestinian state.

Meanwhile, ahead of Trump’s meeting with Netanyahu in Jerusalem Monday, a live-streamed White House schedule stated Trump would deliver remarks in “Jerusalem, Israel,” apparently recognizing Israel’s sovereignty over the holy city despite Trump himself never affirming a change in U.S. policy. Trump’s two-day visit came immediately before the Israeli holiday of Jerusalem Day, which this year marks the 50th anniversary of Israel’s reunification of the holy city during the Six-Day War. Since 1967, the international community—including the U.S.—has refused to officially recognize eastern Jerusalem and its Jewish holy sites as part of Israel.

During Trump’s press conference with Abbas in Bethlehem, the PA leader reiterated the long-held Palestinian position that peace with Israel is conditioned on the creation of a Palestinian state within the pre-1967 lines, with its capital in eastern Jerusalem.

Abbas said the Palestinians’ struggle is not with the Jewish religion, asserting that the “fundamental problem is with the occupation, the settlements, and Israel’s failure to recognize Palestine.” The PA, however, does not recognize Israel as a Jewish state and has repeatedly refused to do so.

Trump’s meeting with Abbas took place a day after the American leader’s historic visit to Jerusalem’s Western Wall (Kotel), the first such visit to the holy site by a sitting U.S. president. Just a few hours after visiting the Western Wall, the background image of Trump’s personal Twitter account was changed to feature a photo of the president with his hand on the Kotel.

Trump visited Israel’s Yad Vashem Holocaust remembrance center Tuesday for a wreath-laying ceremony, and enthusiastically pledged he would “never forget” when signing the guestbook at the site.

Before departing for the Vatican—the final leg of the president’s first overseas trip, which also included Saudi Arabia—Trump gave a keynote address at the Israel Museum. He vowed to prevent Iran from attaining nuclear weapons and touted the possibility of a regional framework for peace, conditioned on the Arab world recognizing Israel’s “vital role.”

“The Palestinians are ready to reach for peace” and “Benjamin Netanyahu wants peace,” said Trump.