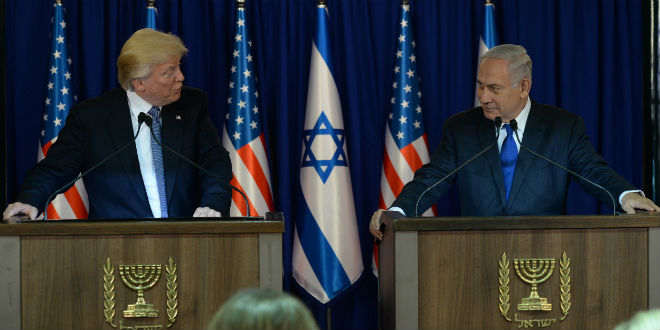 Perhaps the most significant words in President Donald Trump’s joint statement with Palestinian Authority President Mahmoud Abbas on Tuesday were the ones he didn’t say: two-state solution.

Trump met with Abbas for the second time this month in the Palestinian city of Bethlehem, outside Jerusalem, while on a diplomatic visit to Israel. Both Israeli and Palestinian spectators were listening closely for any signal that Trump had shifted his language or agenda to accommodate the creation of a “Palestinian state” as part of a possible plan to kick-start peace talks between the two sides.

However, the president remained silent on the subject, though he said that he was “truly hopeful” about America’s role in helping Israel and the Palestinians forge peace.

He touched on what has become a common theme throughout his Israel visit, asserting, “If Israelis and the Palestinians can make peace, it will begin a process of peace throughout the Middle East.”

Yet, as Al Jazeera reporter Hoda Abdel-Hamid noted in disappointment, Trump “didn’t speak of right to self-determination. He didn’t speak of the two-state solution.”

Indeed, Trump has not referenced a “two-state solution” or a “Palestinian state” since he stepped foot on Israeli soil Monday afternoon, an omission which has raised hopes in the Israeli right-wing that Trump will not ultimately support either idea in his pursuit of a peace deal.

“This is a huge achievement, on a historic scale, and a big win for anyone opposed to the mistaken and dangerous idea of a Palestinian terror state in the heart of Israel,” said Likud minister Ofir Akunis, the Times of Israel reported.

Settler leader Oded Revivi pointed out that Trump overwhelmingly emphasized peace rather than two states, expressing, “We hope this means that we have moved on from this failed policy and will now work together to build true and lasting peace from the ground up.”

In February, Trump broke with previous US policy on the Israeli-Palestinian conflict by suggesting that the two-state solution was not the only way to achieve peace and effectively ending American commitment to that outcome.

In Tuesday’s meeting, Trump also declined to mention the ongoing Palestinian terror prisoners’ hunger strike, an issue which Arab leaders had urged Abbas to raise with the American leader. The hunger strike, now in its second month, was instigated by Marwan Barghouti, a convicted murderer and terrorist serving several life sentences in an Israeli jail, and has become an important agenda item for the Palestinians. But Trump did not acknowledged the strike.

Palestinian citizens were left underwhelmed by the Trump-Abbas meeting, saying the speeches did not offer anything new. Indeed, the lackluster nature of the confab was consistent with Trump’s pro-Israel strategy, explained the head of the Republican party in Israel, Marc Zell.

“It is clear that the Palestinians are no longer the central issue,” Zell told Breaking Israel News on Tuesday. “Now, meeting them is a just necessary part of the cosmetics of negotiations.”
Read more at https://www.breakingisraelnews.com/88523/talk-abbas-trump-conspicuously-omits-mention-two-state-solution/#exDz3LcHlHKm1ZZC.99