Is Trump a false Cyrus? 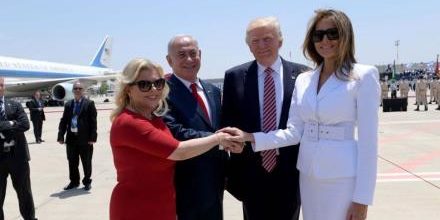 Less than a year after Harry S. Truman left the presidency, he was invited to the Jewish Theological Seminary in New York to meet with dignitaries there. Eddie Jacobson, a long-time friend of his and the one who advised him to recognize the nascent State of Israel in 1948, boastingly introduced the Missourian Baptist as “the man who helped create the State of Israel.”

Truman answered back to his former business partner: “What do you mean, ‘helped to create’? I am Cyrus. I am Cyrus.”

Truman was of course referring to the biblical Cyrus the Great – the Persian king mentioned in the books of Ezra, Isaiah, Daniel and 2 Chronicles who was the initiator and supporter of the Jewish remnant’s return to Judea and its rebuilding of the Temple: “who says of Cyrus, ‘He is my shepherd and will accomplish all that I please; he will say of Jerusalem, ‘Let it be rebuilt,’ and of the temple, ‘Let its foundations be laid.’” (Isaiah 44:27-28) Calling himself Cyrus was not audacious at all. Truman had a key role to play in helping the nascent Jewish state as the “Cyrus” of the world – the most powerful political figure – and he fulfilled it.

Truman left the State of Israel with fragile boundaries, a capital that was divided and how much more so did not he not even come close to helping rebuild the Temple or even lay its foundations, as the biblical king’s edict requested. Yet the president saw this as no fault of his own, because his tenure as Cyrus ran out when his term as “leader of the free world” came to an end. He knew there were those who came before him and there will be those who come after him.

In other words, the role of the modern-day Cyrus, which has been tasked with bringing back the Jewish people to Israel, creating a state and helping the state and its citizens build themselves up so they can in turn shine their light unto the nations, should be not be defined as a singular character but as a movement.

As one looks at the historical events leading up to the establishment of the state, it is clear that Truman was not the only gentile hand to create and assist the State of Israel – this role of Cyrus has been played by many others.

The role of Cyrus belonged to the United Kingdom’s foreign secretary and former prime minister Arthur James Balfour, who in 1917 expressed Britain’s favor of “the establishment in Palestine of a national home for the Jewish people” in his famous Balfour Declaration (just like Cyrus’s edict), which in turned was ensconced in international law via the 1920 San Remo accords.

The same can be said for the United Nation’s General Assembly, which in 1947 passed the Partition Plan, a resolution recommending the establishment of a Jewish state – and an Arab state – in the Holy Land. In what can only be described as a divine twist, countries that over the course of the next 70 years would vote against Israel at every opportunity that they could found themselves sanctioning the establishment of a Jewish state, just as Cyrus, God’s “anointed,” called for the return of the Jewish people.

One can only believe that the leader that now stands at the front of the Cyrus movement is none other than US President Donald Trump. Never has there been a leader since the times of Cyrus that has declared so emphatically his desire to help Israel. As if he was being directly spoken to through God, already on the campaign trail Trump said he would recognize Jerusalem as the “eternal capital of the Jewish people,” and on one occasion he declared himself to be “totally pro-Israel.”

Indeed, Trump’s role as the Cyrus the Great of this generation may not be to bring peace let alone build the Temple or even lay its foundations. His role may be to move his embassy to Jerusalem and convince the nations of the world that this is Israel’s undisputed capital, which is something that hasn’t been agreed upon since the times of Solomon.

As reported Wednesday, Trump will likely stay silent on the embassy move during his visit to Israel next week. But after the issue has been largely ignored for so many years, all signs point to the decision coming to its fruition from above, whether its sooner or later.