Embarking on a Fool’s Errand 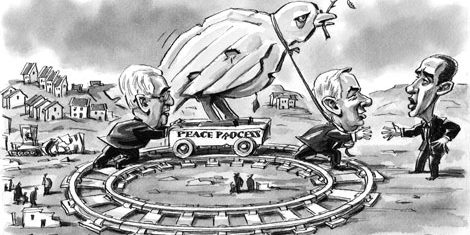 In his memoir, My Life, President Bill Clinton wrote “Right before I left office, Arafat in one of our last conversations, thanked me for all my efforts and told me what a great man I was.’ ‘Mr. Chairman.’ I replied, ‘I am not a great man. I am a failure, and you have made me one.”

I am bringing this up because last week, we saw President Trump, the fourth President in succession — after President Clinton, President George W. Bush and President Obama — being seduced by the siren song of brokering peace between the Israelis and the Palestinians and the lure of securing his place in history.

Once again, we witnessed an American president, seated together with a Palestinian leader, making lofty, encouraging statements about the possibility of achieving a real peace between Israelis and Palestinians. Once again, we heard a White House spokesperson explain why this particular President has the unique qualifications to clinch the deal.

Once again, we saw a Palestinian leader, unabashedly utter a boldfaced lie in front of an American President and an international audience by saying:

Mr. President, I affirm to you that we are raising our youth, our children, our grandchildren on a culture of peace. And we are endeavoring to bring about security, freedom, and peace for our children to live like the other children in the world, along with the Israeli children in peace, freedom, and security.

Because of the painstaking work Itamar Marcus has done at Palestinian Media Watch, most of the civilized world has been made aware of the steady diet of incitement the Palestinians have received over the last 24 years. The Palestinian Authority (PA) has lost no opportunity to teach their children to hate and to murder Israeli and Jewish civilians, to extoll the virtues of being a martyr (“shahid”), and to believe that one day they can go back to their great-grandfathers’ orchards and vineyards in Haifa.

I have always held the conviction that the single greatest litmus test of what a regime believes is what it teaches its children.

You are right to be experiencing a nauseating sense of déjà vu. Like those presidents before him, President Trump will once again begin elevating this issue to a height it simply does not warrant, and therefore will take American prestige down with it.

The reason this does not warrant the attention it deserves is that the Israeli-Palestinian conflict is not the lynchpin that many presidents had thought it was for achieving peace in the Middle East, or for winning over the hearts and minds of people in the region towards America. One would think that after 16 years of experience in the Middle East through our wars in Iraq and Afghanistan, we would have learned by now that this issue is not at the core.

There are two core reasons for why peace in the Middle East depends on a great deal more than the Palestinian-Israeli dispute. The first is the 14-century old Shia-Sunni fissure, and how powerful belief is to the people in the region. It is a regnant part of their identities, and people will fight to the death for their version of who is the rightful successor to the crown of Islam. The second is that for a variety of sociological factors, the region is replete with hundreds of tribal, atavistic and primitive disputes. Even if the Palestinian-Israeli conflict were completely resolved today, the Middle East will not be a bastion of peace and security.

One current example is the ongoing feud between Fatah and Hamas, and the P.A.’s current refusal to pay for Gaza’s electric bills. Of course, this touches on the familiar question that, even if we were to broker a peace deal with the Palestinians, who speaks for the Palestinians?

Beyond that, however, it sickens me to see America sink a considerable amount of money, prestige, and effort in a process which is doomed to failure.

As though they are selling and reselling the same rug in the Arab souk, for the last 24 years, the Palestinians have been recycling the same 3 tired, old promises to 1.) recognize Israel’s right to exist; 2.) end the incitement and 3.) end the terror.

A familiar cycle then ensues: After the White House speeches, expectations rise. Negotiations inevitably break down, and then there is the tragic spilling of blood on both sides.

Why do I believe that it is inevitable that the negotiations will break down? Because when Ehud Barak met with Yasser Arafat at Camp David, he bet the barn, and then each successive Israeli negotiator offered more, under the assumption that what they had to offer would be so generous, no Palestinian leader could possibly refuse it.

On May 25, 2000, the day that the Camp David talks broke up between Arafat and Barak, I was at the Washington Institute for Near East Policy. Then, a quite sullen representative of the Israeli delegation, Attorney General, Eliyakim Rubenstein came to address the group. He told us that members of his delegation were actually crying on the way to Ronald Reagan Airport. He said: “What we offered to the Palestinians was so generous, no responsible Israeli government could ever offer it again. In fact, we were questioning ourselves as to whether or not we actually acted responsibly.”

He explained that what they had offered: 94% to 96 % of Judea and Samaria, with additional land swaps within pre-1967 Israel, of 1 to 3 percent; shared sovereignty of Jerusalem, where Israel would have control of the Western all, and the Palestinians would have control of the Temple Mount, or Haram al-Sharif; and a right of return for a thousands of Palestinian refugees, with a compensatory package for those that could not be absorbed.

Arafat did not say “yes” and he did not say “no.” He simply walked away from the table. And the people on the ground experienced the bloodshed and horror of the second intifada.

This was followed by Ehud Olmert’s even more generous offer, where he agreed to forgo Israeli sovereignty on Judaism’s most sacred site – the Temple Mount.

By now there have been over 1,000 Israeli victims who have been sent to their graves as a result of this “peace process,” and 71 Americans, including two unborn children.

Like a sand trap in the desert, these former negotiations have created a loggerhead that is almost impossible to extricate one’s self out of:

It saddens me profoundly to see the Trump administration embarking on this fool’s errand, but what saddens me more, still, is the prospect of loss of life that is likely to follow when yet another round of talks will inevitably break down.

Sarah N. Stern is Founder and President of EMET, the Endowment for Middle East Truth, an unabashedly pro-Israel and pro-American think tank and policy shop in Washington, DC.