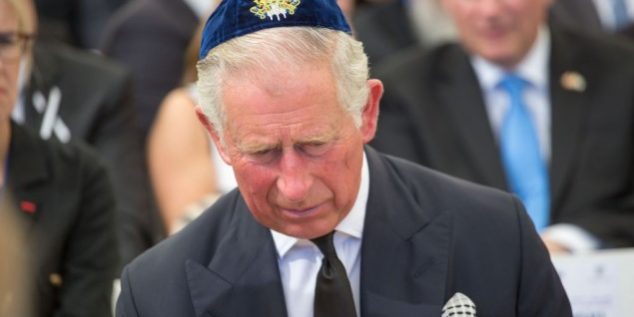 BY TAMAR PILEGGI AND RAOUL WOOTLIFF, Times of Israel—

A potentially historic visit to Israel by a senior member of the British royal family scheduled for later this year has reportedly been canceled by the country’s Foreign Office over fears it would anger the UK’s Arab allies.

The Sun tabloid reported Sunday that Prince Charles will not visit Israel in the fall of 2017 for a trip that was planned to coincide with the 100-year anniversary of the Balfour Declaration.

Though never officially confirmed by London or Jerusalem, a senior British Jewish community leader told The Times of Israel last November that plans were underway for a member of the royal family to visit Israel in the first-ever official visit.

In March, in a meeting with UK Foreign Secretary Boris Johnson, President Reuven Rivlin publicly extended an invitation to Prince Charles to visit Israel during the centennial year of the 1917 signing of the Balfour Declaration.

But according to The Sun, the Royal Visits Committee, the branch of the Foreign Office that coordinates trips on behalf of the royal family, nixed the visit in an apparent effort to “to avoid upsetting Arab nations in the region who regularly host UK Royals.”

The UK Foreign Office denied a visit had ever been planned, in a statement to The Times of Israel.

“Her Majesty’s Government makes decisions on Royal Visits based on recommendations from the Royal Visits Committee, taking into account advice from the Foreign and Commonwealth Office. The Committee never proposed a royal visit to Israel for 2017. Plans for 2018 will be announced in due course,” a spokesperson said.

While royals have visited Israel in the past, no representative of the British monarchy has ever come to the country on an official “royal tour.”

Prince Charles’s attendance at Shimon Peres’s funeral last year and the funeral of slain prime minister Yitzhak Rabin in 1994 did not include diplomatic meetings and are not considered official royal visits. Nor was a brief 1994 visit by his father, Prince Philip, the Duke of Edinburgh, to attend a ceremony commemorating his mother, Alice of Battenberg, who is buried on Jerusalem’s Mount of Olives.

Despite numerous invitations over the years, no UK government has approved such a visit to Israel since the end of the British Mandate and the establishment of the state in 1948.

Israeli officials have bristled at royals’ unwillingness to come to the Jewish state, while they appear to have no qualms about visiting authoritarian states like Saudi Arabia and Qatar.