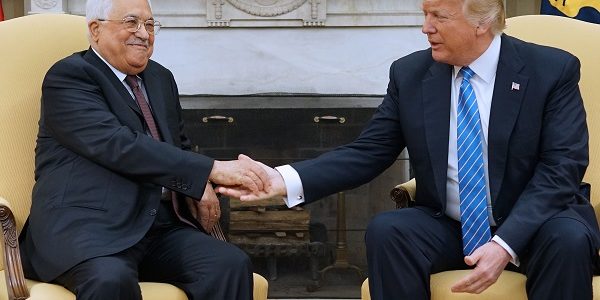 By all accounts, US President Donald Trump is a friend of the Jewish state.

It is due to Trump’s heartfelt support for Israel and the US-Israel alliance that his meeting Wednesday with PLO chief Mahmoud Abbas at the White House is most discouraging.

By meeting with Abbas, and committing himself to working toward achieving a peace deal between Abbas and his PLO and Israel, Trump undermines Israel.

He also undermines himself and his nation.

Israel is the most immediate casualty of Trump’s decision to embrace Abbas and the PLO, because the PLO is Israel’s enemy.

Abbas is an antisemite. His doctoral dissertation, which he later published as a book, is a Holocaust denying screed.

Abbas engages in antisemitic incitement on a daily basis, both directly and indirectly. It was Abbas who called for his people to kill Jews claiming that we pollute Judaism’s most sacred site, the Temple Mount in Jerusalem, with our “filthy feet.” The Palestinian media and school system which he controls with an iron fist both regularly portray Jews as evil monsters, deserving of physical annihilation.

Abbas’s PLO and his Palestinian Authority engage as a general practice in glorifying terrorist murderers. As has been widely reported in recent weeks, his PA and PLO also incentivize and underwrite terrorism to the tune of $300 million a year, which is paid, in accordance with PA law, to convicted terrorists sitting in Israeli prisons and their families.

And that’s just the money we know about.

In welcoming Abbas to the White House, Trump chose to ignore all of this in the interest of fostering a peace deal between Israel and the PLO.

There are three problems with this goal. First, the peace process between Israel and the PLO is predicated on the notion that the US must pressure Israel to make massive concessions to the PLO. So simply by engaging in a negotiating process with the PLO, Trump has adopted an antagonistic position toward Israel.

The third problem with Trump’s decision to engage in peace negotiations between Israel and the Palestinians is that any hypothetical deal a hypothetical Palestinian leader would accept, would endanger Israel’s very existence. So in the unlikely event that he reaches “the deal,” his achievement will imperil Israel, rather than protect it.

Again, Israel isn’t the only party harmed by Trump’s decision to embrace the Palestinian dictator whose legal term of office ended eight years ago.

Trump himself is harmed by his move.

Trump’s move is self-destructive for two reasons. First, he is setting himself up for failure. By positioning himself in the middle of a diplomatic initiative that will fail, he is guaranteeing that he will fail.

Trump’s move also endangers the support of one of his key constituencies. Evangelical Christians in the US voted overwhelmingly for Trump in both the Republican primaries and in the general election. They rallied to his side due to Trump’s pledge to appoint anti-abortion justices to the Supreme Court, and to support Israel. By initiating a diplomatic process that pits his administration against Israel, Trump places that support in jeopardy.

Then there is the US itself.

Trump’s engagement with the PLO harms US core interests in two ways. First there is the issue of coalition building.

Consider for a moment the other anti-American autocrat Trump reached out to this week.

Trump’s recent invitation for Philippine President Rodrigo Duterte to visit him in Washington has been roundly criticized by Washington’s foreign policy elite. Last year Duterte stunned Washington when he launched an expletive-filled denunciation of Obama and announced he is ditching the Philippines’ longstanding alliance with the US in favor of an alliance with China.

Obama did nothing to convince Duterte to change course. While understandable from Obama’s perspective, the fact is that the US needs to restore its alliance with Manila to secure its interests in the Far East.

The most acute threat the US now faces is North Korea’s threat to launch a nuclear attack against America. Due to the passivity and hapless diplomacy of Trump’s predecessors, Pyongyang may well have the means to carry out its threats.

In the longer term, the US has a vital interest in restoring its alliance with the Philippines to contend with the rapidly rising strategic threat China poses to its interests.

Hence, despite the fact that Duterte is a potty-mouthed strongman and bigoted authoritarian, US interests require Trump to embrace him.

This then returns us to Abbas.

In contrast to Duterte, no US interest is served by embracing Abbas.

The US’s chief challenge in the Middle East today is to form a coalition of states and actors that can help it stem Iran’s rise as a nuclear-armed, terrorism-sponsoring regional power. The members of such a coalition are clear.

Israel, Egypt, Saudi Arabia and the UAE stand united today in their opposition to Iran, its nuclear program, its support for Sunni and Shi’ite jihadists and terrorist groups, and its moves to establish an empire of vassals that spans westward through Iraq, Syria and Lebanon, southward to Yemen and eastward through Afghanistan.

The members of Iran’s coalition include its Lebanese foreign legion Hezbollah, the Assad regime, the Shi’ite militias in Iraq, Hamas, other Sunni terrorist groups aligned with the Muslim Brotherhood and Yemen’s Houthis.

By embracing the PLO, rather than build and strengthen the anti-Iranian alliance of Israel and the anti-Iranian, anti-Muslim-Brotherhood Arab states, Trump is tearing that alliance apart. In its place he is cobbling together an anti-Israel alliance comprised of Iran’s allies in Qatar and to a degree in Turkey, the PLO, and at least passively, Hamas. This anti-Israel alliance is supported, grudgingly, by the Saudis, Egyptians and others who cannot afford to be seen abandoning the Palestinians.

In other words, by embracing the PLO, Trump is strengthening Iran and its supporters at the expense of Israel, the US-aligned Sunni states and the US itself.

Moreover, by embracing the PLO Trump is directly undermining the US’s goal of defeating terrorism in two key ways.

First, Trump’s move undermines congressional efforts to block further US funding of Palestinian terrorism. Today, the Taylor Force Act, which enjoys massive support in both houses of Congress, is making its way through Congress. The act will block US funding of the PA due to its payments to terrorists and their families.

On Wednesday Trump pledged to keep those funds flowing. This pits him against the Republican-controlled Congress. Congressional sources relate that the Taylor Force Act is just the first move toward holding the PLO accountable for “its monstrous behavior.”

To embrace Abbas, Trump will either have to veto the Taylor Force Act and other congressional initiatives or insist on receiving a presidential waiver for implementing them. Such waivers, like the presidential waiver to block the transfer of the US Embassy to Jerusalem, will ensure that US taxpayers will continue to incentivize Palestinian terrorism against Israel.

The second way Trump’s decision to embrace the PLO harms the US’s efforts to fight terrorism became clear this week with Hamas’s new PR document. Hamas’s new policy document departs not one iota from the Muslim Brotherhood group’s devotion to the goal of destroying Israel.

In adopting its new document, which calls for Israel to withdraw, first and foremost, from Judea, Samaria and Jerusalem, Hamas has adopted the PLO’s wildly successful strategy of engaging in a dual campaign against Israel, waging terrorist war against Israel on the one hand while winning the support of the West on the other.

Hamas’s document is a restatement of the PLO’s 1974 phased plan for destroying Israel.

The PLO’s plan – which it continues to implement today – involves accepting limited territorial gains from Israel. The territory that Israel cedes in each phase will not become a Palestinian state. Rather it will serve as a launching ground for a new war against Israel.

Under the phased plan, the PLO adopted the ruse that it is interested in territorial compromise with Israel, in order to advance its actual goal of destroying Israel piece by piece.

Trump’s decision to become the fourth US president to welcome a PLO chief to the White House, and his apparent decision to continue funding the terrorist group are new evidence of the wild success of the PLO’s strategy.

Just as the Hamas document neither contradicts nor abrogates its genocidal pledge to eradicate Israel boldly asserted in its covenant, so the PLO’s phased plan and its subsequent embrace of the “peace process” neither contradicted nor superseded its founding charter that calls for Israel’s destruction.

In a similar fashion, the Western media received the news of Hamas’s PR stunt with respect and interest. Given the reception, Hamas has every reason to expect that in due time, its transparent ruse will open the doors of the chanceries of Europe and beyond to its terror masters.

In other words, by embracing Abbas and the PLO on Wednesday, Trump empowered Hamas. He signaled to Hamas – and to every other terrorist group in the Middle East – that to receive international support, including from his administration, all you need to do is say that you are willing to follow the PLO’s dual strategy of engaging simultaneously in terrorism and political warfare and subterfuge.

There is no upside to Trump’s move. It will not bring peace. It harms prospects for peace by empowering Abbas and his terrorist henchmen.

It will not strengthen Israel. It places Israel on a collision course with the Trump White House and undermines its regional posture.

It will not help the US to build a coalition to defeat Iran and its vassals. It subverts the coalition that already exists by embarrassing the Sunnis into siding with terrorists against Israel.

It does not advance the US war on terror. It empowers terrorists to kill Israelis and others by using US tax revenues to fund the PA, providing a blueprint for other terrorists to wage political war against the West and Israel.

And it harms Trump by alienating a key constituency and undermining his relations with Congress.

It is hard to see how Trump, now committed to this dangerous folly, can walk away from it. But to diminish the damage, a way must be found, quickly.