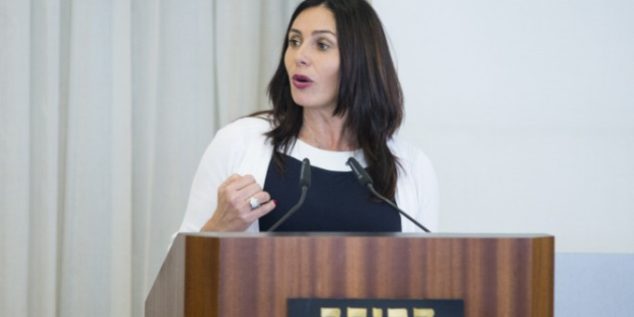 BY STUART WINER AND RAPHAEL AHREN, Times of Israel—

Israeli Minister of Culture and Sport Miri Regev is expected to demand that the offices of the UN’s cultural body in Jerusalem be shut following a controversial resolution passed on Tuesday denying Israeli claims to Jerusalem.

Regev, of the ruling Likud party, will present her demand on Wednesday at a cabinet meeting, Channel 2 reported Tuesday, hours after the resolution on “Occupied Palestine” was submitted to UNESCO’s Executive Board by Algeria, Egypt, Lebanon, Morocco, Oman, Qatar and Sudan, and referred to Israel as the “occupying power” when discussing Jerusalem, indicating that it has no legal or historical ties to any part of the city.

The resolution passed with 22 votes in favor, 23 abstentions, 10 opposed, and representatives of three countries absent.

Regev said that Israel has had sovereightny in Jerusalem for 50 years and that there was no need “for observers from the likes of the UN” in the Israeli capital.

UNESCO maintains an office at the UN headquarters in the Armon Hanatziv neighborhood in Jerusalem alongside the United Nations Truce Supervision Organization (UNTSO) and the UN Special Coordinator for the Middle East Peace Process, Nickolay Mladenov.

The building was leased to the UN in 1967 to monitor the ceasfire between Israel and its Arab neighbors following the Six Day War.

Regev said the site should be re-claimed by Israel and claimed that she would turn to the Foreign Ministry and to other relevant authorities in order to return Armon Hanatziv for state use,” Channel 2 quoted her as saying.

Regev also addressed a recent petition by the right-wing Regavim movement which has claimed that the UN has carried out unauthorized contruction work at the compound in recent years. She called the allegations “grave” and said that the details “must be verified as soon as possible.”

The petition was filed with the Jerusalem District Court claimed that the construction work was undertaken without building permits from the Jerusalem Municipality or the authorization of the State of Israel.

Filed in late March, Regavim claims in the petition that “the UN has taken advantage of its immunity by carrying out a series of illegal construction projects in the compound on property which is state owned.”

“The illegal building projects within the compound include: making structural changes to a historic building from the 1930’s, the illegal construction of a multi-story office building, the building of an illegal storage facility, and the installation of an illegal petrol station for UN personnel usage,” Regavim wrote in a press statement on its website.

Tuesday’s UNESCO resolution, unlike previous resolutions, does not refer to the Temple Mount only as Haram al-Sharif, or to the Western Wall Plaza only as al-Burak plaza, the respective sites’ Muslim names. In fact, these sites are not mentioned at all.

Furthermore, Resolution 201 EX/PX/DR.30.1 affirms “the importance of the Old City of Jerusalem and its Walls for the three monotheistic religions.” It also notes that the Tomb of the Patriarchs in Hebron and Rachel’s Tomb near Bethlehem, both of which are in the West Bank, “are of religious significance for Judaism, Christianity and Islam” — though it calls them “Palestinian sites.”

However, the resolution still contains many red flags for Israel. For instance, Israel is referred to throughout the document as the “occupying power,” indicating that it has no legal or historical ties to any part of Jerusalem.

Earlier this week, Israel officials acknowledged that the resolution that passed Tuesday was somewhat easier to stomach than previous versions, but emphatically urged Western countries to vote against it.

Israeli government officials also roundly condemned the outcome of the vote. Prime Minister Benjamin Netanyahu derided it as “absurd” lauded what he described as increased global support for the Jewish state in international forums. “Enough,” he declared. “The theater of the absurd when it comes to Israel has to stop.”

“Today there are more countries abstaining or supporting Israel than countries against Israel,” the prime minister said. “That is a change, for the first time.”

Speaking at a reception for foreign diplomats held at the President’s House in Jerusalem to mark Israel’s Independence Day, Netanyahu — who also holds the position of foreign minister — highlighted the progress made in convincing countries to stop backing anti-Israel votes.

“In the past two days I had talks with many of the leaders of your countries, heads of state, foreign ministers… regarding the absurd vote that is being held now in the UN,” Netanyahu said.

“The result is that the number of countries supporting this absurd vote in UNESCO is getting smaller. A year ago, 32 , half a year ago it went down to 26, and now it has gone down to 22.”

“My goal is to have no votes in UNESCO on Israel,” Netanyahu said.

The 10 countries that voted against the resolution were the US, the UK, Italy, the Netherlands, Lithuania, Greece, Paraguay, Ukraine, Togo, and Germany.

In its wording the resolution was slightly less harsh on Jerusalem than previous resolutions, in that it did affirm the importance of the city to the “three monotheistic religions.”

Deputy Foreign Minister Tzipi Hotovely declared in a statement that UNESCO is “continuing to falsify history.”

The resolution, she wrote, “only harms the relevance of the organization that is supposed to protect heritage and culture yet again and again abuses its position when it comes to Israel. Israel doesn’t need approval from political bodies for its historical and undisputed connection to our eternal capital Jerusalem, a 3,00-year-old connection that speaks from every stone in the city.”

“Israel appreciates the countries that stood on the side of truth and didn’t give in to politics that is distorting history,” she added.

Some opposition lawmakers on Tuesday alleged that the UNESCO resolution was motivated by anti-Semitism.

Opposition leader MK Isaac Herzog said in a statement that “the UNESCO resolution today against Israel is an anti-Semitic and anti-Israel disgrace that distorts the history of the Jewish people and its unshakable connection to its eternal capital Jerusalem. It is a sad decision without any standing or validity that will find its way to the dustbin of history, just like allegations that Zionism is racism.”

Fellow opposition lawmaker and Yesh Atid party leader MK Yair Lapid said in a statement that “the resolution is unfounded and anti-Semitic.”

“No one, including UNESCO, can rewrite Jewish history. Certainly not on the day when Israel is celebrating 69 years of independence as a strong and democratic country. Jerusalem is the eternal capital of Israel, it always was and always will be,” he said.

“Once again today we saw how a string of representatives in the United Nations, instead of following the truth, surrender to the anti-Semitic campaign that is led by anti-Israel organizations,” Lapid added.