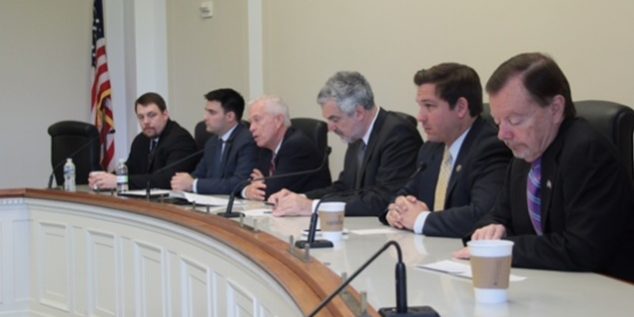 BY ERIC CORTELLESSA, Times of Israel—

Florida Rep. Ron DeSantis (R) said Thursday that US President Donald Trump will announce the relocation of the US embassy from Tel Aviv to Jerusalem when he visits Israel at the end of May, fulfilling a campaign promise he appeared to walk back after assuming office.

Trump’s planned visit — his first to the Jewish state — coincides with Jerusalem Day, when Israel will celebrate 50 years since the reunification of the city under Israeli control after the 1967 Six Day War.

“What better time could there be to announce the relocation of the US embassy to Jerusalem than when you are over here celebrating with our Israeli friends this very important 50th anniversary of the liberation of Jerusalem?” DeSantis said.

Israeli officials confirmed on Thursday that Trump’s team is planning a visit on May 22-23. Jerusalem Day starts on the evening of May 23. The White House told The Times of Israel that it is “exploring” the visit, but did not flesh out any further details.

“I think the announcement of that trip is a signal that it is more likely to happen than not, and will send a powerful signal to other countries around the world that America is back and will stand by our allies and will not let folks cower us into not doing the right thing,” added DeSantis.

The Florida congressman’s remarks were made at an event on Capitol Hill launching the Congressional Israel Victory Caucus, a group made up of several staunchly pro-Israel Republicans.

DeSantis, who is chairman of the House Oversight National Security Subcommittee, has oversight on American embassies around the world. A Trump ally, he has been adamant the president will follow through on this campaign pledge.

Last month, the congressman visited Jerusalem touring potential embassy sites and told reporters Trump would eventually authorize the relocation, or, at the least, allow it to happen. Indeed, on that trip, he also predicted the president would announce the move around the anniversary of the Six Day War.

“He’s in a position where he’s either going to follow his campaign promise or he’s actually going to have to sign this waiver, and I just think knowing the president, he has been a man of his word,” he said.

“I don’t think that he’s going to, on the same month where people here in Jerusalem are celebrating the 50th anniversary of Jerusalem Day, sign the waiver. I would bet that he would not do that and he would announce that the embassy would be moving.”

Indeed, Trump’s trip to Israel also coincides with an important decision he will have to make on whether to move on the status of the US Embassy in Israel.

Congress passed a law, in 1995, mandating the embassy be moved to Jerusalem, but allowed the president to exercise a six-month waiver on national security grounds. Every president since, including Barack Obama’s predecessors George W. Bush and Bill Clinton, signed such a waiver every six months.

The last waiver, signed in December by Obama, expires at the end of May, when Trump will have to decide whether to sign it or follow through on his campaign promise and allow the change.

The move would be a highly symbolic gesture, valued by Israel as confirmation of the city as its capital, but strongly opposed by Palestinians and the Arab world.

After vowing to move the embassy practically immediately, Trump changed course at the onset of his presidency.

Following meetings with Arab leaders, and especially Jordan’s King Abdullah II at the National Prayer Breakfast, Trump said he would like to see the move take place eventually but that he wouldn’t go through with it right away.

Trump’s pick to serve as US ambassador to Israel, David Friedman, was also highly vocal in his resolution that the president would move the embassy, saying in an announcement of his nomination that he expected to carry out his duties in Jerusalem.

Friedman is due to arrive in Jerusalem on May 15 and to present his credentials to President Reuven Rivlin in June.