General Mattis and the Fatah Tautology 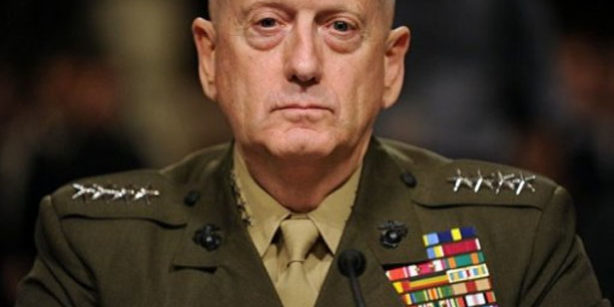 On Friday, US Secretary of Defense James Mattis will visit Israel as part of a tour of the region that will bring him to Egypt, Saudi Arabia, Qatar and Djibouti. The declared purpose of Mattis’s trip is to “reaffirm key US military alliances, engage with strategic partners in the Middle East and Africa, and discuss cooperative efforts to counter destabilizing activities and defeat extremist terror organizations.”

Ahead of his visit, Mattis should spend some time considering the hunger strike being carried out by the Palestinian terrorists imprisoned by Israel. A serious consideration of the strike will tell him more about the nature of the Palestinian conflict with Israel than a hundred “expert” briefings.

There are several important things for Mattis to consider in relation to the strike.

The first thing he needs to note is that all of the terrorists on strike are members of the Fatah terror group.

The second thing Mattis needs to consider about the strike is that it is supported by the international Left.

To understand why, Mattis needs to recognize the Fatah tautology.

But first, a bit of background.

The terrorists’ strike is the brainchild of convicted mass murderer, Fatah leader and darling of the international Left, Marwan Barghouti.

Barghouti is serving five life sentences in prison for murdering five Israelis. Israeli authorities believe that Barghouti was directly responsible for 37 murders, but they were only able to convict him on five counts.

Barghouti’s role in the killings goes far beyond the terror attacks he directly ordered.

From 2000 until his arrest in 2002, Barghouti was the commander and mastermind of the Palestinian terror war that began in September 2000 after Fatah leader Yassir Arafat rejected Palestinian statehood at Camp David.

In other words, hundreds of Israelis are dead today because of Barghouti.

The Left insists Barghouti is a moderate and a peacemaker and that Israel should release him and let him take over Fatah and the PLO from octogenarian Mahmoud Abbas.

They insist this because of the Fatah tautology. According to the tautology, Fatah is “moderate” and “pro-peace.” Barghouti is a leader of Fatah. Therefore Barghouti is moderate and pro-peace.

So despite the protests of irritating Israeli terror victims, and the verdict of the court, Barghouti isn’t a terrorist and none of the terrorists he commanded are terrorists.

None of them are terrorists because they are members of Fatah. And Fatah is a moderate, pro-peace party. So they are moderate peace activists.

After all, the Palestinians can’t be incentivizing terrorism. They’re from Fatah and Fatah is a moderate peace party.

The Fatah tautology is what informed the New York Times’ decision to publish an op-ed by Barghouti in its Sunday edition in support of the prisoners’ strike.

Not surprisingly, Barghouti slandered Israel repeatedly in his essay.

Also not surprisingly, in its tagline the Times described Barghouti as a “Palestinian leader and parliamentarian.”

It would be bad enough if this circular reasoning was relegated to the fever swamps of the Left.
But it isn’t.

Numbered among Fatah’s most fervent supporters are Mattis and his fellow generals at the US Military’s Central Command.

Mattis arrives in Israel with a public record replete with anti-Israel statements that indicate he swallowed the Fatah tautology hook, line and sinker.

In 2013, shortly after retiring from his post as Centom commander, General Mattis resonated Barghouti and his leftist supporters when he blamed Israel for the absence of peace.

Speaking at the Aspen Institute Mattis said that the US must make the establishment of a state run by Fatah terrorists — on land Israel controls, that it requires for its national security and that it has sovereign rights to — a key US goal.

In his words, “We’ve got to find a way to make the two-state solution that Democrat and Republican administrations have supported. We’ve got to get there, and the chances for its starting are starting to ebb because of the settlements and where they’re at, they’re going to make it impossible to maintain the two-state option.”

Also echoing Barghouti’s libels, Mattis said that if Israel continues to allow Jews to live where they have rights to live and property rights to build then it will become an “apartheid” state.

Mattis is reputedly a very smart, well-read man. And yet, his claims show that despite his intelligence, he has a stunning lack of intellectual curiosity about Israel and the Palestinians and their positions in the wider Middle East.

Lest we give in to the temptation to believe that Mattis’s ignorant, tautological thinking was simply a function of his service in the Obama administration, during his Senate confirmation hearings as President Donald Trump’s nominee to serve as Defense Secretary, Mattis doubled down.

When asked point blank to name Israel’s capital, Mattis refused to acknowledge that Jerusalem the capital of Israel. Instead, he stunned lawmakers when he proclaimed that Tel Aviv is the capital of the Jewish state.

Mattis’s hostile view of Israel and the Palestinians isn’t surprising. And the reason it isn’t surprising isn’t because Mattis is a member in good standing of the lunatic Left. He’s not.

Mattis’s ignorance is understandable because he hails from the US Military’s Central Command. The Pentagon’s area command responsible for the Middle East has one debilitating problem. It is a problem that guarantees that Centcom officers will fail to understand the Middle East and fail to win America’s wars in the region.

Centcom’s problem is that it deliberately does not include Israel.

As far as Centcom is concerned, Israel is not part of the Middle East. Israel is in Europe.
Centcom officers speak only to Arabs. And their Arab counterparts insist that Israel is the problem.

Rather than critically analyze this claim, Centcom officers internalize it.

Rather than notice and get irritated by the fact that due to their Arab colleagues’ anti-Semitism the US is forced to pretend that Israel is located on a completely different continent, Mattis and his underlings adopted their reason-bereft prejudice.

Rather than rebel against their inability to communicate directly with their Israeli counterparts and insist that they be permitted to bring the US’s closest ally in the Middle East into their regional plans and analyses, Centcom officers have embraced the irrational and strategically catastrophic view that the main source of instability in the Middle East are the Israeli communities located beyond the 1949 armistice lines.

Mattis’s visit will take him to Jerusalem, rather than Tel Aviv. No doubt Prime Minister Binyamin Netanyahu will mention that Jerusalem is Israel’s capital and express his enthusiastic support for moving the US embassy from Tel Aviv to Jerusalem.

But as far as Israel’s relations with the US generally and the Pentagon specifically are concerned, moving the US embassy to Jerusalem is of secondary importance.

He must insist that Israel be integrated into Centcom.

Only when the American officers responsible for determining US policies in the Middle East recognize that Israel is part of the Middle East will they have the cognitive capacity to understand the realities of the region. And the first reality that will become clear to them is that despite the Fatah tautology, Fatah is a terrorist organization, and an extremist one at that.