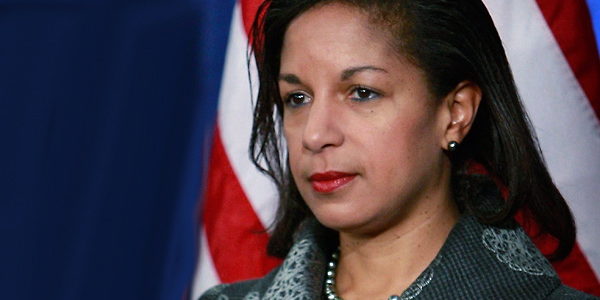 Eli Lake from Bloomberg set off a firestorm in the US this week with his revelation on Monday that in the last six months of the Obama administration, Susan Rice, former president Barack Obama’s national security adviser, requested that the US intelligence community enable her to use foreign intelligence collection as a means of gathering information about Donald Trump’s advisers.

According to Lake’s story, during the course of the US presidential campaign, and with steadily rising intensity after President Donald Trump won the November 2016 election, Rice used her access to intercepted communications of foreign intelligence targets to gather information on Trump’s advisers. Some of those reports were then leaked, injuriously, to the media in violation of US criminal statute.

Whereas in the normal course of events, the identities of American citizens whose conversations with foreigners are intercepted by the US intelligence community are shielded, in the final months of the Obama administration, Rice repeatedly – on “dozens of occasions” – asked that the identities of Americans who conversed with foreigners be exposed.

The Americans in question were Trump’s advisers.

Lake’s scoop both confirmed and expanded House Select Committee on Intelligence Chairman Devin Nunes’s charges from two weeks ago against the Obama White House. Nunes said that he had seen evidence that the Obama administration collected information on incoming Trump administration officials that had no intelligence value. In other words, Nunes alleged that the data gathering was not for national security purposes.

With the exceptions of Obama and his top adviser and confidante Valerie Jarrett, Rice was the top official in the White House.

Lake’s story and subsequent stories have obvious implications for the public’s assessment of Trump’s March 4 allegation on Twitter that Obama spied on him. But the Rice story is equally, if not more, important for what it teaches us about Obama’s mode of governing.

The Rice story strengthens the assessment that for eight years, Obama and his associates weaponized the federal government to wage a political war against their domestic political opponents in a manner that is simply unprecedented.

As Smith recalled, in December 2015 The Wall Street Journal reported that during the domestic political battle surrounding the nuclear deal the Obama administration struck with the Iranian regime, the administration used intelligence intercepts of conversations of Israeli officials to spy on its domestic opponents inside the pro-Israel community and on Capitol Hill.

In the latest iteration of the Obama White House’s abuse of intelligence data, administration officials collected and leaked information about members of the incoming Trump administration to undermine its ability to chart a new course in foreign affairs.

Due to their efforts, Trump’s national security adviser Lt.-Gen. (ret.) Mike Flynn was forced to resign in a cloud of controversy just three weeks after Trump took office.

Revelations by Lake and others exposed that Flynn was targeted in the Obama White House’s abuse of intelligence. The administration used its intelligence intercepts and unmasking of Flynn to cultivate the sense – with no evidence – that Flynn was a Russian plant.

Ignatius reported that in their conversations the subject of those sanctions arose, but that Flynn made no policy determination regarding how the Trump administration would view the sanctions upon entering office.

In other words, Flynn did nothing wrong. He did his job.

But immediately after the story was published, Flynn was tarred and feathered as a Russian agent. He entered office with Trump on January 20, but was declared “controversial,” “embattled” and “compromised” from his first day in office.

The innuendos followed Flynn like a cloud until he was forced to resign, less than three weeks after entering the White House.

This brings us to 2015, and the fight in Washington and throughout the US about Obama’s nuclear deal with Tehran. In the 2015 operation, the White House allegedly used intercepted communications between US citizens and Israeli diplomats and between Israeli diplomats in Washington and Jerusalem to defame opponents of the nuclear deal. Lawmakers and private citizens were repeatedly subjected to condemnations in the media where unnamed administration sources questioned their loyalty, alleged that they were serving the interests of a foreign power against the US, and that in the case of lawmakers, they were bought and paid for by rich Jewish donors.

Speaking to Smith, a pro-Israel activist who had participated in the battle against the nuclear deal explained how the White House operation worked.

“At some point, the administration weaponized the NSA’s legitimate monitoring of communications of foreign officials to stay one step ahead of domestic political opponents….

“We began to notice that the White House was responding immediately, sometimes within 24 hours, to specific conversations we were having. At first, we thought it was a coincidence being amplified by our paranoia. After a while, it simply became our working assumption that we were being spied on.”

Weaponizing intelligence reports was only one way that the Obama administration abused its power to weaken, silence and criminalize its domestic opponents.

Weaponizing the IRS was another way.

The most well-known case of such abuse was the IRS’s failure to approve the request for nonprofit status submitted by Z Street, a pro-Israel educational organization.

After being told by the IRS that its application for nonprofit status was being subjected to “special scrutiny” due to its Israel-centric agenda, and the fact that it advocated views that “contradict those of the administration,” Z Street sued the IRS for viewpoint discrimination.

The IRS attempted to get the case dismissed, but a panel of three irate federal judges rejected its request.

After slow rolling its response to the lawsuit, ahead of Obama’s departure from office, the IRS suddenly approved Z Street’s request for nonprofit status, seven years after it was first requested.

There are several aspects of the story of Obama’s abuse of power, and the fact that Israel and its US allies were key targets of that abuse, that are important beyond the domestic discourse in the US.

Moreover, the fact that Z Street and other US nonprofit groups that espouse positions on Israel at odds to the Obama administration’s views were specifically targeted for discrimination by the IRS indicates that the Obama administration’s political war against US support for Israel was all-encompassing. It wasn’t limited to the realm of foreign policy. It related as well to the ability to Americans to educate their fellow citizens on the need for a robust partnership with a strong Israel.

The second thing that we learn from our deepening understanding of the Obama administration’s apparent weaponization of the federal bureaucracy as a means to defeat and undermine its political opponents is that apparently, Obama’s top aides deliberately acted to undermine Trump’s ability to govern. This is particularly apparent in everything related to foreign policy.

For instance, in its waning days, the State Department extended Yael Lempert’s tenure at the National Security Council for two years. Lempert is a foreign service officer notorious for her rabid opposition to Israel.

In another example, last July, Obama moved Sahar Nowrouzzadeh from his National Security Council, where Nowrouzzadeh served as Iran director, to the State Department, where he is now in charge of policy planning on Iran and the Persian Gulf.

As professional foreign service officers, both Lempert and Nowrouzzadeh are essentially impossible to fire or move.

In an interview with PBS following Nunes’s revelations, Susan Rice falsely denied that the Obama White House had “unmasked” incoming Trump administration personnel whose conversations with foreigners were intercepted by the intelligence community.

After denying the charges, Rice was asked her view of Trump’s foreign policy so far. Rice responded derisively.

In reality, if indeed Trump is implementing Obama’s ISIS policy, his failure to enact a new policy there, and indeed, the perceived chaos and disarray of his foreign policy across the board, is not a function of Trump’s incompetence or of the inexperience of his advisers. To the extent that Trump has failed to date to enact a clear foreign policy, this week’s disclosures strengthen the sense that his failure owes primarily to the deliberate subversion of his administration by his predecessor.