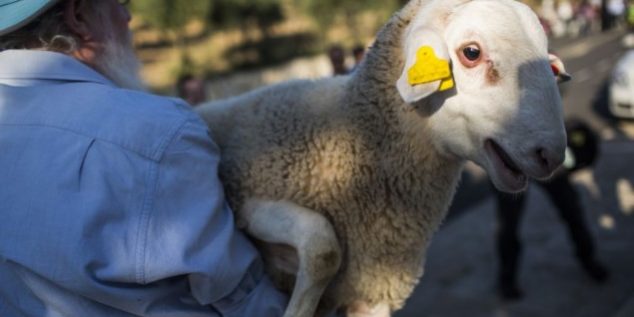 An annual reenactment of the sacrifice for the upcoming Passover festival will be held for the first time inside the walls of the Old City of Jerusalem.

The High Court of Justice on Monday upheld a police decision to bar a group of Temple Mount activists from holding their annual ceremony at Davidson Park, an archaeological site adjacent to the Western Wall on the southern side of the Temple Mount complex.

But in an unusual move, police on Wednesday said the activists would be allowed to go ahead with the reenactment on Thursday in the main square of the Jewish Quarter of the Old City.

As in previous years, it is expected that MKs, rabbis and hundreds of members of the public will attend the ceremony.

Just like the Passover sacrifice that was offered in the time of the Temple, it will include slaughtering a lamb, flaying it in the traditional manner, throwing its blood on a model altar, and roasting and eating it.

The event will take place at 5:30 p.m. in the courtyard of the Hurva Synagogue. It will be preceded by a discussion of the Jewish laws of the ritual and the launching of an application to coordinate tours of the Temple Mount.

The group, the Temple Mount Institute, started a crowdfunding appeal and has already raised more than the total cost of the ceremony, NIS 30,000 ($8,250).

For over a decade the group has held a reenactment of the ritual slaughter of the Passover offering, a sheep or goat sacrifice.

Each year the activists request permission to do it on or near the Temple Mount, where ritual sacrifices were carried out at the time of the temple. And each year they have been refused by police and the courts, which say it could cause unrest if it is held on or near the most hotly contested site in the Israeli-Palestinian conflict.

The group performs the demonstration because, according to Jewish law, a “real” Passover sacrifice can only be conducted on the Temple Mount.