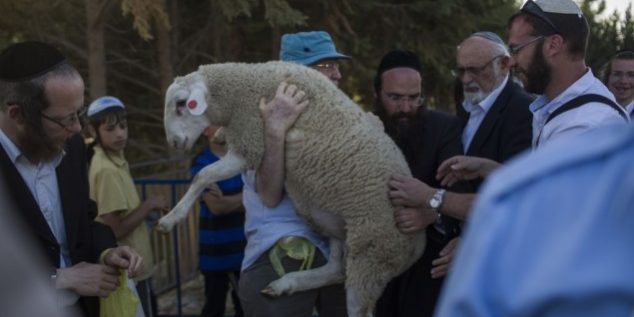 By Tamar Pileggi, Times of Israel—

The High Court of Justice on Monday upheld a police decision to bar a group of Temple Mount activists from trying to reenact the ritual slaughter of a sacrificial animal near the Jerusalem holy site in preparation for the upcoming Passover holiday.

The attempt by the activists and the routine denial by the law and order authorities has become a ritual in its own right in recent years.

For over a decade a group called the Temple Mount Institute have held a demonstration of the ritual slaughter of the Passover offering, a sheep or goat sacrifice.

Each year they request to do it on or near the Jerusalem holy site where ritual sacrifices were carried out at the time of the temple.

And each year they are refused by police and the courts fearing it could cause unrest, with the site that currently houses the Al-Aqsa Mosque and the Dome of the Rock, the most hotly contested site in the Middle East conflict.

The group perform the demonstration because a “real” Passover sacrifice may only be conducted on the Temple Mount.

The group this year requested to hold the religious ceremony at Davidson Park, an archaeological site adjacent to the West Wall on the southern side of the Temple Mount complex. This too was rejected by the court.

The group launched a crowdfunding appeal and has already raised over half the money for the sacrifice, said to cost NIS 30,000 ($8,250)

As in previous years, it is expected that the group will relocate their demonstration to another site. The sacrifice is expected to take place Thursday.