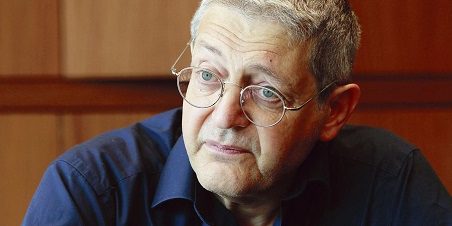 The historian Georges Bensoussan has long been a controversial academic figure in France.

In 2002 the former high school history teacher burst onto the public stage with the publication of Les Territoires Perdus de la Republique (“The Republic’s Lost Territories”), a book that explores the deep seated anti-Semitism, racism and misogyny that characterized many impoverished French schools in areas with high immigrant populations. (Bensoussan wrote it under the pen name Emmanuel Brenner.)

The book opens with a terrifying true account:
The attack lasted forty minutes: a steady stream of insults – “Jewish dogs,” “Yids,” “You’re a and a kike” – acts of physical violence, faces and clothes smeared with apple and cheese, all because “a Jew – that stinks.” Fifteen-year-old twin sisters, tenth-grade students at Bergson high school in the nineteenth arrondissement of Paris, recount this nightmare. They tell of being surrounded by a dozen students who demanded (ultimately, without success) that one of the sisters kneel and beg forgiveness “for being a Jew.”

Bensoussan, who was born in Morocco and educated in France, documented this and similar attacks, slurs, and instances of prejudice that he claimed permeated some French schools. He closed his book with an appeal “to my millions of fellow citizens of Arab origin who have come from North Africa and elsewhere. These lines are intended to enjoin them to sweep away the seed of anti-Semitism that is eating at their community…”

In 2006, Ilan Halimi, a 24 year old Jewish man, was kidnapped, held and tortured in an immigrant area of Paris before being murdered. His captivity was an open secret among local residents.

In 2012 three young Jewish children and a parent were shot at point-blank range by a French-born Jihadist in front of a Jewish school in Toulouse.

In 2012 alone, 614 anti-Semitic acts were reported to French authorities.

Two years later, in 2014, crowds burned Jewish businesses and chanted “death to Jews” in Sarcelles, a Jewish and immigrant-rich suburb of Paris. The following year, four Jewish shoppers were killed in an attack on a kosher grocery store in Paris. The list of anti-Jewish attacks goes on and on. In 2012 alone, 614 anti-Semitic acts were reported to French authorities.

Against this backdrop of intensifying anti-Jewish rhetoric and violence in France, George Bensoussan continued to write and speak out, penning books about France and Israel. He became an editor at the Shoah Memorial in Paris, charged with maintaining the memory of the Holocaust and educating people about the Holocaust and intolerance today.

On October 10, 2015, a documentary about Territoires Perdus de la Republique was set to be shown on French TV, and Bensoussan was invited on to Repliques, a radio show, to discuss the book. Bensoussan discussed the phenomenon of anti-Semitism in French Muslim communities. Then he quoted Smain Laacher, a professor at the University of Strasbourg, who appeared in the documentary: “Just let me quote an Algerian sociologist, Smain Laacher,” Bensoussan said, “who with great courage said as much in the documentary: ‘It is a shame to maintain this taboo that in Arab families in France – and everybody knows this but nobody wants to say it – anti-Semitism, it is suckled along with mother’s milk.” (Translated by Marc Weitzmann for Tabletmag.com.)

The following day, Smain Laacher said he objected strongly to the expression of anti-Semitism being imbibed with mother’s milk, which he took to mean implying that anti-Semitism is somehow passed along biologically. The expression Laacher used in his work, he vehemently explained, was that anti-Semitism was spread in some French Muslim communities “in the air that one breathes”. (Prof. Laacher was also offended that Bensoussan called him Algerian, pointing out that he now lives in France.)

Prof. Laacher was correct that Bensoussan misquoted him. But the gist of what Bensoussan seemed to be trying to imply, that Jew-hatred is common and spread within some French immigrant families, did appear to roughly correspond with what Prof. Laacher explained in the documentary. In Prof. Laacher’s own words: “This anti-Semitism is already planted into the domestic space. It quasi-naturally rolls off the tongue, planted into the tongue…. From parents to children, when they want to reprimand them, it is enough to call them Jews. OK, every Arab family knows that. Not to see that this anti-Semitism is first domestic is a monumental hypocrisy.”

Bensoussan and Laacher carried on their feud until 2016, when they were formally reconciled. But within days of the 2015 interview, Islamist activists had seized on Prof. Laacher’s objections. The French Muslim organization Comite Contre l’Islamophobie en France (the Committee Against Islamophobia in France), or CCIF, which The New York Times has called “a militant group linked with hate preachers and radical imams”, brought a claim against Bensoussan to the Superior Audiovisual Council (CSA), France’s media watch-dog, alleging racism.

The International League Against Racism and Anti-Semitism (LICRA) soon joined the CCIF in its complaint of “biological racism” on the part of Georges Bensoussan. The charges made their way to the Ministere Public, part of the Ministry of Justice in France, which decided to prosecute Bensoussan for “incitement to racial hatred” for his remarks.

“Is it I who must stand before this tribunal today? Is it not anti-Semitism that has led us to the present situation that should be judged?”

Trial opened on January 25, 2017. Bensoussan spoke in his own defense: “For more than a quarter of (a) century, I have been working as a researcher on the mechanism that defines hatred and makes it a self-fulfilling phenomena. The area of my specialty is Jewish conditions in Islamic countries…. Already back in 1965, the Moroccan writer Said Ghallab wrote in his work titled The Jews Go to Hell, ‘The worst insult that a Moroccan can tell to another Moroccan is to treat him as a Jew. It is with this milk of hatred that we grew up.’” Given the intense anti-Semitism in French Muslim communities, Bensoussan also asked, “Is it I who must stand before this tribunal today? Is it not anti-Semitism that has led us to the present situation that should be judged?”

The trial electrified France. The courtroom was packed and the opening hearing lasted until past midnight. As the trial progressed, events outside the courtroom seemed to comment directly on the legal arguments within.

Two weeks after the trial began, it was revealed that Mehdi Meklat, a popular young French Muslim author and documentary maker, has a long-running alter ego who has been sending shockingly anti-Semitic Tweets for years, a fact known to some of his admirers. Meklat’s tweets included “Bring Hitler to kill the Jews” and “Should break the legs of this (expletive)”, referring to a prominent French Jew and son of Holocaust survivors. “What the Meklat affair shows,” explained Yonatan Arfi, a spokesman for the Representative Council of French Jewish Institutions, “is that for the generation of Medhi Meklat – the young – anti-Semitism is almost natural. It’s part of their culture, and it’s not even considered shocking.”
A few weeks later, on February 21, 2017, this slow-burning anti-Semitism erupted into violence when two Jewish kippah-wearing brothers, aged 17 and 29, were driving through a suburb of Paris and were forced off the road by a driver who yelled “Dirty Jews, you’re going to die!” When the brothers exited their car, patrons ran out of a nearby Middle Eastern cafe and attacked the brothers. One member of the mob had a hacksaw which they used to saw off the fingers of one of the Jewish men.

On March 6, 2017, the 17th Criminal Tribunal of Paris acquitted Georges Bensoussan. He merely “misspoke”, the court determined, and had no intention to incite hatred. Within hours, the CCIF announced it would appeal the decision and continue to pursue charges against Bensoussan.