A liberal degree in anti-Semitism on American campuses 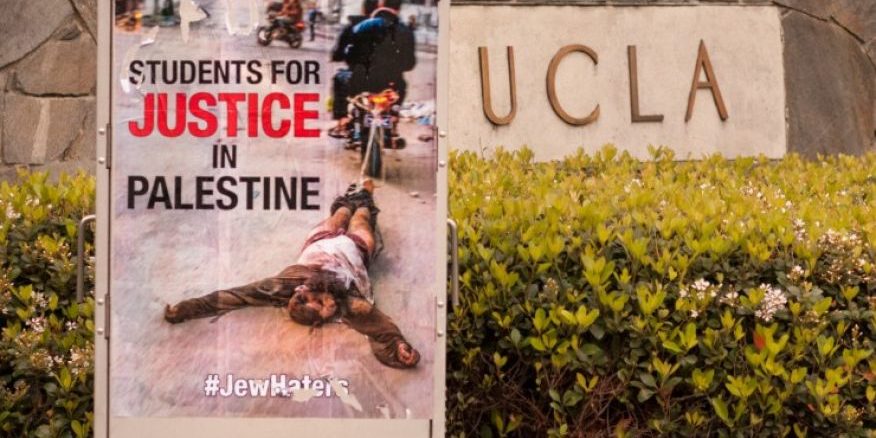 Anti-Semitic incidents are exploding across America, with more than 100 recent bomb threats to JCCs, overturned gravestones at Jewish cemeteries, and other troubling incidents. This “unprecedented and inconceivable escalation of anti-Semitic acts in the United States … is “chillingly reminiscent of the pogroms in Eastern Europe and … the Nazi rise to power,” warned World Jewish Congress President Ronald S. Lauder.

The wave also pervades college campuses around the nation under the guise of protecting “oppressed” Palestinians from “colonial” Israel. In a survey of 50 U.S. universities, more than half the students reported observing or experiencing anti-Semitism from peers or staff. BDS—boycotts, divestment and sanctions against Israeli businesses, academics, and cultural events—often accompanies these incidents; though proponents claim to eschew racism, its real purpose is to delegitimize Israel.

But anti-Semitism and BDS are the tip of a formidable iceberg—the radical Left’s agenda is to undermine Israel and erode the democratic foundations of America, Israel’s ally. Its targeting of top U.S. colleges is designed to politically groom the next generation of leaders. The political Left was already orchestrating attacks against American academia when author David Horowitz chronicled in 2009 how the Left was insinuating its “radical agenda into … collegiate institutions … and even secondary schools.” To defend our freedoms, democracy and the future of our children, we must recognize and heed this battle cry.

In earlier generations, anti-Semitism, the Holocaust and Islamic aggression evoked sympathy for Israel. But today’s millennials are influenced not only by liberal professors and administrators, but also by being deliberately targeted by pro-terrorism student organizations that push the right progressive buttons by portraying Palestinians as the trodden-upon underdogs and Israel as a repressive Apartheid state “occupying” Palestinian land. In this intellectually clouded environment, millennials—those born after 1980—fail to analyze and assess facts, and blindly adopt the Palestinian platform in allegiance to a vague human-rights agenda favoring victims, underdogs and the oppressed.

Progressive student groups such as Students for Justice in Palestine systematically establish chapters across U.S. campuses where they aggressively market their message, joining forces with groups like Black Lives Matter and LGBTQs to leverage their influence. Their methods are propaganda, graffiti, vandalism, harassment, intimidation and violent disruption tactics against Jews, pro-Israel individuals, student groups and events.

What makes the millennials so vulnerable to exploitation? They have no memory of the Holocaust or the 1967 war started by Arab states intent on destroying Israel. Although a majority (54 percent) of Americans support Israel, several polls report that millennial support for Israel is weakening as their enthusiasm for the Palestinian cause grows.

The erosion of the U.S. Anglo-European demographic base sheds some light, said historian Alex Joffe in The Times of Israel. Its biblically inspired religious tolerance and acceptance of Jews influenced America’s institutions and values. But a 1965 immigration-quota change enacted to attract skilled labor was later replaced by amnesties that retroactively legalized millions of illegal immigrants who were indifferent to American values. These two policy shifts resulted in a new generation of ethnically and religiously diverse millennials.

Although conservative professors are hiding their views for fear of losing tenure, they may lose much more if they remain silent. Silence is also fueling Islam’s influence over the minds of our youth. There has never been a greater need for Christians and those who love democracy to speak up on behalf of Israel. It’s time for parents to withdraw support and tuition from universities that permit anti-Semitic acts; for academic leaders to discipline student organizations that foster hate; for students to report professors who politicize students, and to support pro-Israel student groups. Consider speaking to your congressional representatives and appealing to President Trump not to dismantle the State Department’s envoy for combating anti-Semitism.

Mark G. Yudof, former president of the University of California system, said, “I don’t want to see BDS become stronger because 20 years from now, these students will be judges, heads of Congress…We have to respond now to maintain the historical relationship with Israel.”