US lawmakers urge Trump not to cancel anti-Semitism envoy position 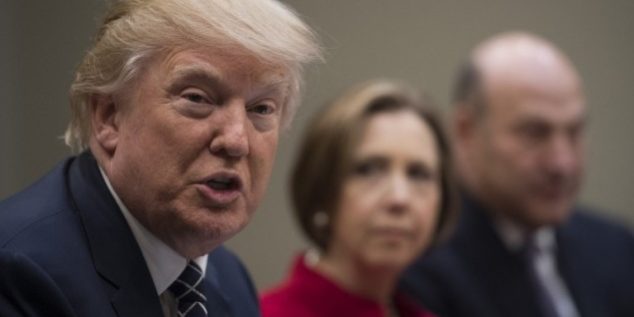 BY ERIC CORTELLESSA, Times of Israel—

A bipartisan group of 167 Capitol Hill lawmakers signed an open letter to US President Trump Monday urging him to appoint a special envoy to monitor and combat anti-Semitism through the State Department.

The letter called the appointment of such an official “crucial in documenting human rights abuses against Jewish communities abroad as well as developing and implementing policies designed to combat anti-Semitism.”

The letter comes amid a sustained uptick in anti-Semitic incidents throughout the United States, including seven waves of bomb threats to Jewish centers, repeated desecrations of Jewish cemeteries and Nazi-themed graffiti sprayed at various buildings and schools around the country.

Trump is considering eliminating the position of anti-Semitism envoy among other envoy positions as part of a planned cut to federal agencies, Bloomberg reported last month. He is expected to trim the department’s budget by roughly 37 percent, a move he has said will help cover increases in defense spending.

In his opening address to Washington’s diplomatic corps after being confirmed by the Senate, Secretary of State Rex Tillerson warned that changes in Foggy Bottom may accompany the new administration in the White House.

“I remind you that our undertakings are larger than ourselves or our personal careers,” he said. “I will deploy the talent and resources of the State Department in the most efficient ways possible. That may entail making some changes to how things are traditionally done in this department.

“Change for the sake of change can be counterproductive and that will never be my approach,” he added. “But we cannot sustain ineffective traditions over optimal outcomes.”

Since January, more than 100 Jewish centers and other institutions have received bomb threats over such episodes, causing some parents to pull their kids from JCC programs.

But the duties of the anti-Semitism envoy that congressional members are imploring the president appoint would not be limited to America. The office, created in 2004 by the Global Anti-Semitism Review Act, is tasked with reporting on anti-Semitism worldwide.

The current special envoy is Ira Forman, a former executive director of the National Jewish Democratic Council, from January 1996 through June 2010. He was appointed by former president Barack Obama in May 2013.

The letter’s signatories emphasized to Trump that the envoy helps ensure that “diplomats around the globe are operating around the same definition of anti-Semitism.”

Specifically, they adopt their understanding as “a certain perception of Jews, which may be expressed as hatred toward Jews. Rhetorical and physical manifestations of anti-Semitism are directed toward Jewish or non-Jewish individuals and/or their property, toward Jewish community institutions and religious facilities,” the letter said.

The lawmakers warned Trump that dispensing with the position would send the wrong message to the world, especially as hate crimes toward Jews are becoming more of a common story in the daily news.

“We view US leadership on combatting anti-Semitism and promoting human rights as pivotal components of American diplomacy and foreign policy,” the letter said. “The Office of Special Envoy enables the US to show the world its commitment to these ideals, particularly at a time when anti-Semitism is dangerously on the rise.”