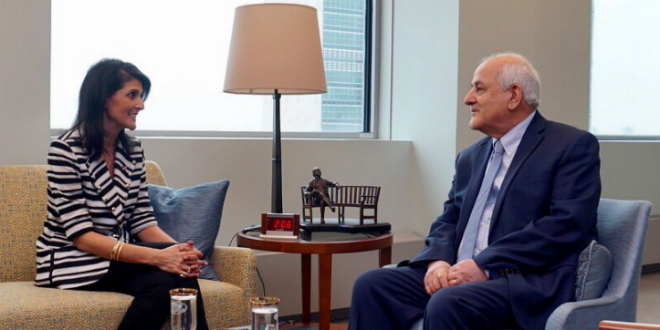 Palestinians should not look to the United Nations for a solution to its conflict with Israel, US Ambassador Nikki Haley warned in her first meeting with the Palestinian Authority’s envoy to the UN on Tuesday.

Haley, who in her short tenure has already made clear at the UN that the international body’s bias against Israel is unacceptable, met with Riyad Mansour – who is not an official envoy, as the PA is not recognized by the UN, but a ‘permanent UN observer’ – for 45 minutes in New York.

After the meeting, Haley tweeted that she had told Mansour the PA must meet with Israel in direct negotiations “rather than looking to the UN to deliver results that can only be achieved through the two parties.”

In the past, the Palestinian Authority has repeatedly attempted to circumvent Israel at the United Nations, leading to breakdown of peace talks and mounting mistrust. In 2014, PA President Mahmoud Abbas’s request to join 15 different UN agencies and international treaties violated his agreement with then-Secretary of State John Kerry not to make any unilateral moves during the course of peace talks, and the talks were frozen.

Mansour acknowledged Haley’s request to the media, telling AFP that the US envoy had “raised the desire to see the two parties engaging in negotiations” and indicated that the US is considering another bid to revive stalled negotiations.

According to Haley’s Twitter statement, Haley had also warned Mansour that the Palestinian Authority must stop its incitement to violence and terror. The talk, however, was cordial, both parties said.