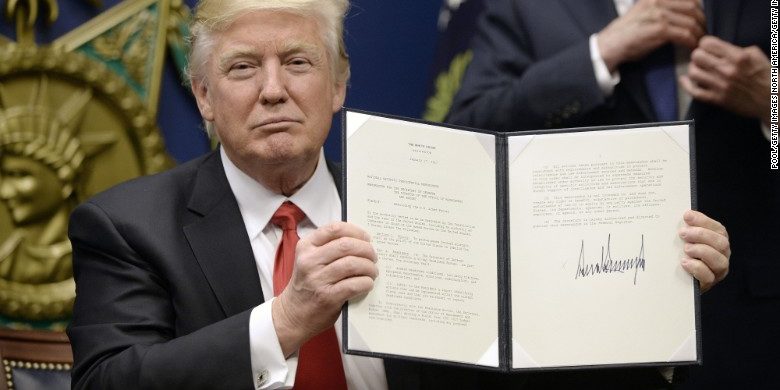 As immigration protest surge at airports and cities across the United States and in other places around the world, President Donald Trump continues to stand by his Jan. 27 executive order, with some adjustments, restricting immigration and his pledge to safeguard the citizens of the United States. Acknowledging America as a nation of immigrants, he vowed “compassion to those fleeing oppression…while protecting our own citizens and borders.” The importance of protecting borders from illegal entry is something Israel has known for a very long time yet she is unjustly criticized by the international community for protecting her citizenry from those whose objective is to perpetrate acts of terror.

Trump’s order temporarily suspends immigration from seven Muslim-majority countries that sponsor terrorism and provides improved vetting of radical Islamic terrorists. With certain exceptions such as those with work permits, refugee entry into the U.S. has been largely curtailed for Syrian refugees and those traveling from Iran, Iraq, Libya, Somalia, Sudan and Yemen. Unlawful entry is a detriment to the national security of democratic countries. It opens the door to terrorist infiltration and, in the case of Israel, would have a major negative impact on the demographic balance of the Jewish state.

Nevertheless, Trump’s immigration policy stirred up a hornet’s nest around the world. In the United States, lawsuits challenging the order say it is discriminatory and violates constitutional rights. But case law overall indicates that noncitizens do not enjoy such rights. In all the brouhaha, a crucial and determining factor for keeping America and other Western democracies safe is being overlooked by the media and is missing from public discourse. Islam’s own immigration strategy is not part of this discourse but it should be.

In the Muslim Brotherhood’s 1991 “General Strategic Goal for the Brotherhood in North America,” purposeful Muslim immigration is Stage One of radical Islam’s battle against the West and Western values. The 1987 Muslim Brotherhood Project presents Islam as a “civilization alternative” supporting a “global Islamic State” through jihad …“to eliminate and destroy Western civilization from within, and to sabotage its miserable house…so it is eliminated…so that Islam is victorious over all other religions.” Islam is on a global caliphate mission with a country-by-country political strategy of subjugation in four stages beginning with immigration (“settlement”) and population expansion. The second stage is “consolidation of power”—via demands for deferential treatment, religious accommodation, judicial, cultural and educational non-integration, and covert efforts to destroy the host society from within. This is achieved by undermining the power base of non-Muslims and their religions, especially Jews and Christians. The third stage is “Open War.” The fourth is transformation of the host state to an Islamic theocracy under sharia law, which denies and destroys non-Muslims’ rights, freedoms, religions, culture, worship and populations. Most global jihadist organizations embrace this theology, including Hamas, Hezbollah and Palestinian militants who threaten Israel from the southwest, north and from its own heartland, squeezing her forcibly from three sides.

The only two countries that acknowledge radical Islam’s goal of a worldwide caliphate are Israel and the United States, though political correctness misleads some. Israel is a Jewish state and the United States historically was founded on Judeo-Christian values. In democracies, immigrants are free to live and worship as they choose, but not to unravel the fabric of the society, culture and country that has welcomed them. Democracy’s “melting pot” doesn’t mix with radical Islam, because Islam and freedom cannot coexist.