Why the Jerusalem Connection supports Aliyah from Europe 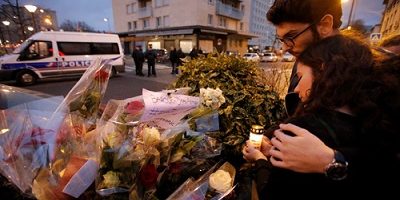 “You know it is not always wise to tell people that you are Jewish,” my son’s Hebrew school teacher told me. We belonged to a synagogue in Bonn, Germany. “Sometimes it can be dangerous and it is better to keep quiet.”

I cringed when I heard him say this, something he repeated numerous times, but I slowly adopted his advice. There was an incongruity living as a Jew in Germany. On the one hand there was a trace of fear, but by and large we lived in a bubble and denied the lurking anti-Semitism. We missed the more glaring signs of trouble.

Having armed police on a 24-hour basis outside the small and only synagogue in Bonn, and, for that matter, any other synagogue in Germany, was considered so normal that no one found it odd. It was just the way things always have been since 1945. The Germans I knew didn’t think there was anti-Semitism, not in Germany! So I never stopped to ask myself, why do Jews need to be protected?

Without really realizing it, I began to avoid telling people that I was Jewish.

I taught many academics English for their jobs at a scientific organization that also funded projects in Israel. It was here that my sensitivity to anti-Semitism was raised. Every now and then, one of my students would make a comment that left me feeling horrible. It was often about Israelis greediness for money and their demands for more of it. The warning bells started to go off in my head. Jews and money is a very old trope and it was said in such a way that left me feeling dirty.

Then came the summer of 2014 and the Gaza war. I was forced out of my complacency. The main German newspapers started a journalistic war against Israel. Every day I read with trepidation all the hideous crimes that Israelis were committing and the terrible death toll of Palestinians.

A few weeks into the war, 2000 Arabs and Turks along with a few left wing supporters marched through the main street in Frankfurt screaming, “Hamas, Hamas, Jews to the Gas.” In Germany this is not only frightening, it’s downright chilling. The police didn’t stop the march or the incitement to violence. Instead there were reports of police storming an apartment where a sympathizer with Israel had hung the Israeli flag in support. The police removed the flag saying they didn’t want to encourage more violence.

Things were terribly askew and the taboo of saying anti-Semitic things in Germany had been broken.

I was in turmoil. I had been brought up as a Jew who loves and supports Israel as the home of the Jews. Through my years of inaction and complacency, I had not really followed the conversation of Israel and the Middle East; I seemed to have forgotten the historical facts of Israel and the Jews, and I realized with a shock that I had no idea what the truth was. I had no idea if Israel was really committing these heinous war crimes and I didn’t know how to defend her right to exist.
How could I support Israel if they were indeed doing these terrible things?

How could I support Israel if they were indeed doing these terrible things? And yet how could I not support Israel? What chilled me even more was the response of my students, who all had their PhDs, to the war in Gaza. Many times my students gave their unguarded comments on Israel’s awful aggression.

The shame I started to feel fueled me to start researching and reading every day to understand what was going on and why Israel was being presented in the media in such a distorted and ogre-like fashion.

I was in a class with my students and the news in Israel had been particularly bad that day. In desperation I looked at them and said, “Do you think Israel has a right to exist?” They looked straight at me, still not knowing I was Jewish, and sighed in unison. They just stared at me and didn’t say a word. But their thundering silence spoke volumes. One student finally broke the silence and said that what the Jews have done to Arabs in Israel is what the Americans did to the Native Americans. I gasped inside as I realized that we had reached a new level of hatred. It was as if a veil had fallen and I started seeing what was really happening.

Signs of anti-Semitism that I had previously been unable to pinpoint were popping up everywhere. I discovered that in Cologne, a huge city near Bonn with a larger Jewish community, there was a 30-foot stand called “The Wailing Wall” which consisted posters and photos of maimed and dying Palestinian children, victims of Israeli aggression, along with caricatures of Jews drinking Arab blood and cutting up a Palestinian for dinner. I couldn’t believe that this was being allowed in Germany.

I subsequently found out that two years earlier a rabbi in Berlin, taking a walk with his six-year-old daughter, had been attacked for being Jewish by a group of Arab youths. He was brutally beaten just for being Jewish. I had no idea this had happened; it didn’t make any headlines in the news.

But Israel always made the headlines, and they were bad. The more I researched, the more I uncovered how difficult day-to-day life had become for Jews in different areas in Germany. Wearing a yarmulke in public was something that needed to be avoided as it resulted in violence. I went to a small theatre in Bonn to see Arthur Miller’s Broken Glass, a play about the reaction of American Jews to the fate of Jews in Germany in 1938. Very few Germans came, but quite a few from the Jewish community came, including the rabbi who came in with a golf cap to hide his yarmulke. He told me it would be too dangerous to walk through the streets without the cap. I felt like I had been in a coma and had woken up in a different world. How had I been oblivious to all of this?

The question kept gnawing at me: Why didn’t more Jews leave in the early 30s? Why did they wait so long?
I read about Jews in France and Belgium who were taking their kids out of public schools and putting them into Jewish schools because of the bullying they faced because they were Jewish. There were similar reports of this happening to Jews in Germany. I started listening to Jewish journalists who live in Germany, like Benjamin Weinthal, the European correspondent for the Jerusalem Post who gave a talk at the Institute for Studies of Global Antisemitism Policy discussing whether Europe is safe for Jews.

For me the writing was clearly on the wall. The hatred towards Israel was growing exponentially and not in relation to other events in the world. Now that I was looking, I started reading reports on groups of Arabs gathering and screaming “Death to the Jews” and “Heil Hitler,” echoes from a Germany that not long ago trumpeted such cries. What a German wouldn’t dare say out loud was now being said by groups of Muslims where this taboo was non-existent.

The question kept gnawing at me: Why didn’t more Jews leave in the early 30s? Why did they wait so long? Was I reading the wrong signs now? Was I too oversensitive?

Some Jews back then did see the signs and somehow managed to leave. And I was convinced that I was seeing the signs now. Leaving meant giving up everything we owned and taking our two children and immigrating. The risk was high, but the risk to stay seemed even higher.

We immigrated to the United States in July 2016, fearful that the ensuing events in Germany and Europe are pointing in the direction of disaster. As we build our new life, for the first time in a long time living openly as Jews, I hope I am wrong.