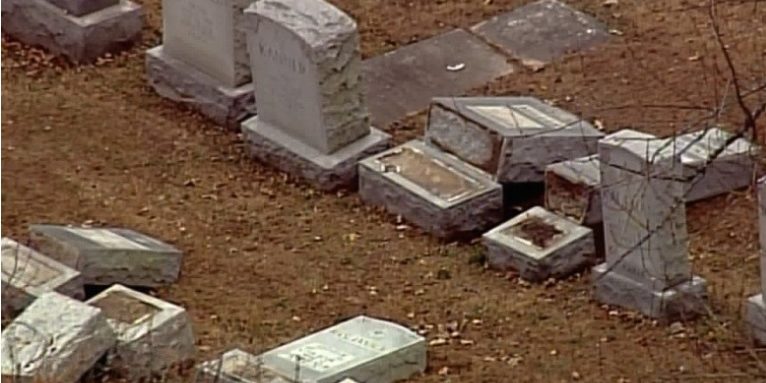 President Donald Trump said Tuesday that anti-Semitic threats to the American Jewish community were “horrible” and “painful,” as well as a “sad reminder” of evil.

The condemnation came a day after bomb threats were issued against Jewish community centers across the United States for the fourth time in just over a month, and after gravestones were toppled at a Jewish cemetery in St. Louis. The US president has faced growing criticism for failing to explicitly renounce anti-Jewish sentiment.

“We have to fight bigotry, intolerance and hatred in all of its very ugly forms,” Trump said during a visit to the National Museum of African American History in Washington, DC. “The anti-Semitic threats targeting our Jewish community centers are horrible and are painful, and a very sad reminder of the work that still must be done to root out hate and prejudice and evil.”

Trump earlier told MSNBC that “anti-Semitism is horrible, and it’s going to stop and it has to stop.” Asked if he denounced displays of anti-Semitism, the president said: “Oh of course, and I do it wherever I get a chance.”

Trump later spoke generally of the problem of racial divides. “It’s just age-old. There is something going on that doesn’t allow it to fully heal. Sometimes it gets better and then it busts apart. But we want to have it get very much better, get unified, and stay together,” he said.

The US president did not give specifics on how he planned to combat hatred, saying only that “we’ll have various things coming out over a period of time, and you’ll see them as they come out and we’ll let you know exactly what they are.”

Trump complimented the museum for its work to bring people closer together, praising the “tremendous numbers” of visitors and saying “this building is about love…I think that really helps to get that divide and bring it much closer together, if not perfect.”

Trump’s statements came as more than 170 gravestones at a Jewish cemetery near St. Louis were damaged by vandals, and after Jewish community centers across the country received bomb threats, in the fourth wave of such incidents.

Shortly before Trump spoke, his defeated election rival, former secretary of state Hillary Clinton, chastised him for his failure to denounce anti-Semitism.

In a Twitter post, Clinton wrote that “JCC threats, cemetery desecration & online attacks are so troubling & they need to be stopped,” adding that “everyone must speak out, starting w/ @POTUS” Trump.

Asked about the threats to community centers Monday, the White House said “these actions are unacceptable.”

“Hatred and hate-motivated violence of any kind have no place in a country founded on the promise of individual freedom,” White House press secretary Sean Spicer said in a statement issued to NBC. “The President has made it abundantly clear that these actions are unacceptable.”

However, the statement left out any mention of Jewish targets, a seeming repeat of the administration’s International Holocaust Remembrance Day statement, which also failed to specifically address the Jewish suffering central to the Shoah.

Trump’s statement on Tuesday came a few days after he drew the ire of much of the American Jewish community for declining to denounce anti-Semitism when asked twice about it in two consecutive press conferences.

In one memorable instance, the president shouted down an ultra-Orthodox reporter, calling his question “unfair” and telling him to be “quiet.”

“It’s not a simple question, not a fair question,” he said. “I am the least anti-Semitic person that you have ever seen in your entire life.”

On Monday, his daughter Ivanka Trump, who is Jewish, posted a tweet on her personal account that appeared to address the dozens of bomb threats against Jewish community centers across the US in recent weeks.

“America is a nation built on the principle of religious tolerance. We must protect our houses of worship & religious centers. #JCC,” tweeted Trump, who has played a prominent if unofficial role in her father’s administration.