Trump Intended to Move Embassy to Jerusalem at ‘12:01, Day One’ 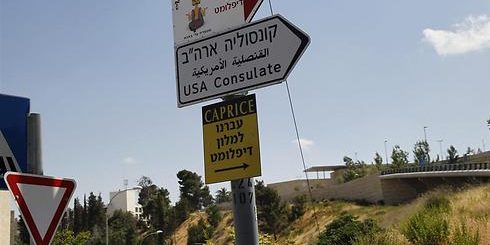 President Donald Trump was prepared to move the U.S. embassy from Tel Aviv to Jerusalem the moment he took office, but reconsidered after taking into account how it would impact Israel’s relationship with its Arab neighbors, a top Republican official revealed on Monday.

Moving the embassy to Israel’s capital had been one of Trump’s strongest campaigning points, and he had planned on making the controversial policy change the first of his presidency, Senator Bob Corker told The Global Politico podcast in an interview, saying, “I think that was going to be their first move at one point.”

Indeed, in the earliest days of his tenure, Trump’s team had already begun making statements on a possible move.

However, Corker said, after considering the issue from a different angle, the president chose to hold back in order to better promote Israel’s interests.

The Iran deal “brought the Arab community close to Israel. And so there’s a real working relationship there right now” which Trump didn’t want to jeopardize, Corker explained.

In fact, the nuclear deal strengthened ties between Israel and its neighbors “more than I think many of the Arab leaders even want their citizens to know,” Corker added.

Israel and its regional neighbors, most of whom fear Iran’s nuclear and military wrath, were largely unanimous in condemning the deal, which opponents believe will only embolden the Iranian republic.

“So when you’ve got a situation like that, do you really want to destroy this alliance that is unprecedented and is real?” asked the senator, who serves as Chairman of the Senate Foreign Relations Committee.

He stressed that Trump’s administration is strongly pro-Israel, but that its views on the Middle East are “evolving” as the president begins to understand the “complexities” involved.

Trump’s plans for the embassy likely wait until his chosen ambassador to Israel, David Friedman, is confirmed before taking any concrete steps, Corker said.

Friedman has announced that as ambassador, he will break with tradition by living in his apartment in Jerusalem rather than the ambassador’s residence near Tel Aviv, where the embassy is currently located.
Read more at https://www.breakingisraelnews.com/83646/trump-intended-move-embassy-jerusalem-1201-day-one/#tFWj2rUMvOc3Ex8t.99