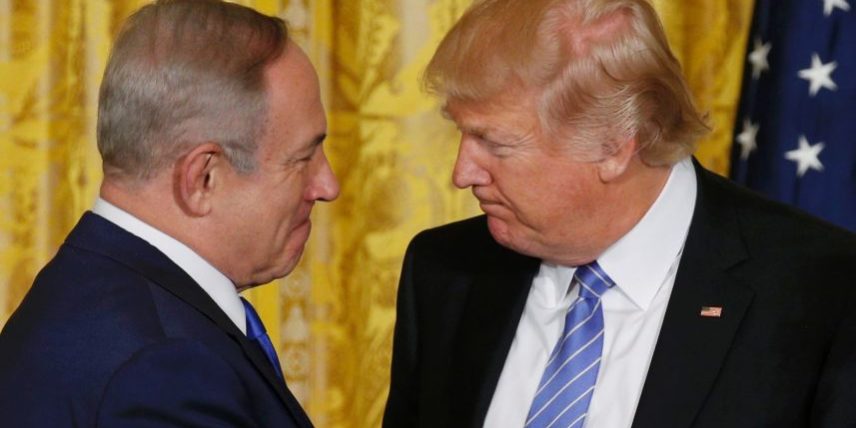 President Donald Trump has announced that US Middle East policy is no longer wedded to the two-state solution.

Speaking at a joint press conference at the White House, at the conclusion of his meeting with PM Netanyahu, the American President said he doesn’t care whether a peace agreement is based on a one state or two state solution, as long as it works. “I’m looking at two states and one state. I am very happy with the one that both parties like. I thought for a while the two state might be easier to do, but honestly if Bibi and the Palestinians, if Israel and the Palestinians are happy, then I am happy with the one they like the best,” Trump said.

He also said that both parties understood that any peace agreement entails compromise from both sides.

Regarding settlements, the US President said he had asked Netanyahu to “go easy” for a while.

He also criticized the UN over the way it treated Israel, saying it was unfair.

He reiterated his commitment to work towards achieving a peace agreement. “Our administration is committed to working with Israel and our common allies in the region towards greater security and stability. That includes working toward a peace agreement between Israel and the Palestinians. The United States will encourage a peace and, really, a great peace deal. We’ll be working on it very, very diligently. But ultimately it is the parties themselves who must directly negotiate such an agreement. We’ll be beside them; we’ll be working with them, but it’s up to them.”

The Israeli Prime Minister opened his remarks by thanking President and Melania Trump for “the truly warm hospitality you have shown me, my wife Sara and our entire delegation.”

After emphasizing the strong bonds of common values that are the foundations of the “remarkably strong” alliance between Israel and the US, he said those values were under attack from radical Islam.

“Our alliance is based on a deep bond of common values and common interest, and increasingly, those values and interests are under attack by one malevolent force: radical Islamic terror. Mr. President, you’ve shown great clarity and courage in confronting this challenge head on,” Netanyahu said.

“You call for confronting Iran’s terrorist regime, preventing Iran from realizing this terrible deal into a nuclear arsenal, and you have said that the United States is committed to preventing Iran from getting nuclear weapons. You call for the defeat of ISIS. Under your leadership, I believe we can reverse the rising tide of radical Islam, and in this great task, as in so many others, Israel stands with you, and I stand with you.

“Mr. President, in rolling back militant Islam, we can seize an historic opportunity, because for the first time in my lifetime and for the first time in the life of my country, Arab countries in the region do not see Israel as an enemy, but increasingly – as an ally.”
Read more at https://www.breakingisraelnews.com/83717/us-ends-commitment-two-state-solution/#VQgh8Y57rhrm5dDy.99