Chief Rabbi Blesses Netanyahu Ahead of Meeting With Trump 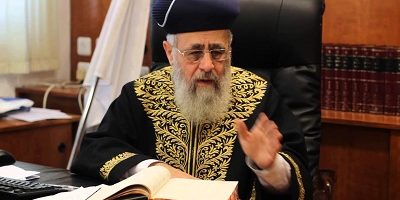 Prime Minister Benjamin Netanyahu on Monday departed for his fateful first meeting with Donald Trump since becoming the 45th president of the United States.

But before Netanyahu left, Sephardic Chief Rabbi Yitzhak Yosef blessed him and prayed for the meeting.

“May the Holy One, Blessed be He, be with your words. You are the representative of the entire Jewish nation, and there is no doubt God will aid you,” said Yosef.

A day earlier, Netanyahu presided over a fiery cabinet meeting where some ministers put heavy pressure on him to take advantage of President Trump’s sympathy to renounce the two-state solution and the so-called “Oslo Accords.”

Netanyahu tried to chill expectations, insisting that even with a president like Trump, there would be limitations to what Israel could do.

Even so, if the meeting ends with either Netanyahu or Trump committing to a Palestinian state, the prime minister will be in for a political firestorm when he gets home.