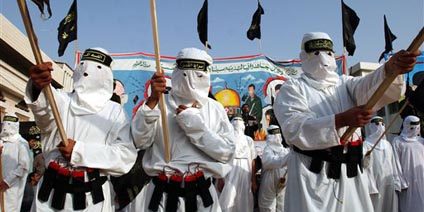 In 732 A.C.E., the Umayyad Islamic Terror Caliphate in occupied Spain, or what was then al-Andulus, invaded the Duchy of Aquitane or what is now south-western France, and ransacked the French city Bordeaux. Seeing the grave threat of the ravaging Islamic forces to Christianity and his Frankish Kingdom, Charles Martel marshaled his forces, and defeated the radical Islamic general Abdul Rahman Al Gahafiqi in the battle of Tours-Poitiers (a little east of Normandy).

In 732, in the face of massive Islamic victories, Martel’s Christian victory gave hope to the Christians and they renamed him Charles “The Hammer” Martel. (For an excellent video of the Tours Battle see Tours Battle Video here.) Martel’s victory steeled the arc of Christian Europeans, and enabled them to defeat the rampaging radical Islamic terrorists of that day.

Today in 2017, US President Donald J. Trump sees the same existential threat of radical Islamic terror to the United States and the Free World. And, we must all support him, and pray for his absolute success: Failure is not an option.

Just as Charles Martel did in 732, President Trump sees the waxing Islamic terror, and calls it like he sees it. In President Trump’s inauguration speech he stated, “We will reinforce old alliances and form new ones, and unite the civilized world against radical Islamic terrorism, which we will eradicate completely from the face of the earth.” If you can’t name your enemy, you certainly can’t fight your enemy. And, President Trump has named his enemy.

And in naming the Free world’s enemy, President Trump has named his allies, principally Israel. In fact, one of the reasons President Obama would never name radical Islam as the enemy is because he knew that by naming Islam as an enemy he was naming Israel as an ally. With President Trump, the world has gone from Obama’s Orwellian fake world, to Trump’s true world.

And just as Charles Martel had to fight a radical Islamic terror that had already occupied significant beachheads in Europe, so too must President Trump begin the fight where radical Islam has already intellectually and geographically occupied the European continent. These European “no-go” zones not only threaten the countries that have allowed them to form, but have eliminated the various countries’ ability to admit they are essentially “occupied.” This harms their ability to effectively mobilize and destroy the waxing radical Islamic terror threat.

And just as Charles Martel had to completely reformulate his military, President Trump is rebuilding an American army that will be able to “eradicate” “radical Muslim extremism” off the “face of the earth.” Such a military reorganization will require a complete re-think of our military force structure. The threat is not a 20th century tank battle, but a 24/7, 365/365 day battle on all fronts: the Homeland, the Cyber-space, the Intellectual Battle Space.

And additionally, just as Charles Martel had to break up the Frankish establishment of Churches, President Trump is going to have to break up the American political elite establishment. America’s establishment has been intellectually occupied by a politically correct mindset that has paralyzed its ability to effectively defend itself against “radical Islamic terror.” As proof of their dystopic inverted worldview, instead of seeing President Trump as a modern-day Churchill defending the Free World against a neo-Nazi Fascist Radical Islamic terror wave, these crazies see Trump as a “Hitler.” Instead of their writing articles for the Wall Street Journal and New York Times, these fake news writers and pundits should be shown up for what they are.

In sum, we all must pray every minute of every day for President Trump’s absolute and unalloyed success. Hopefully, we will be able to crown President Trump, Donald “The Hammer” Trump. Our every freedom and hope rides on his, and hence our, success.