No one is vetting Syrian refugees for signs of antiSemitism 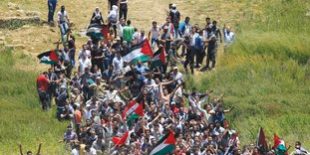 Major Jewish establishment organizations are strenuously lobbying for the resettlement of Syrian refugees on American soil. It’s explained as a natural extension of Jewish values and history – “we, too, were refugees once. We, too, were the ‘other.’” The comparison is, to say the least, abstract.

It ignores vast differences between European Jewish populations fleeing a Nazism intent on killing them anywhere in the world, and Syrian refugees who are not defamed as “subhuman” nor hunted by a murderous ideology, and who have in Europe – and should have throughout the Arab/Muslim world – plenty of open doors. But this flawed analogy is a mere quibble compared to other differences that make the wholesale importation of Syrian Muslims dangerous not only to Jews but to all Americans.

Groups working to resettle Syrian refugees in the US, like the Hebrew Immigrant Aid Society (HIAS), typically respond to fears about a mass migration of people who might be hostile to American values by focusing narrowly on “terrorism” – and specifically to the fear that jihadists could hide among the innocent civilians. HIAS, federal agencies and other groups supporting Syrian immigration report that Syrian refugees are subject to intense scrutiny, more extensive vetting than any other migrant population. HIAS president and CEO Mark Hatfield said, “Refugees coming to the US are subject to more vetting and screening than any other non-citizen arriving in America, subject to multiple layers of screening and review.”

But there is a vast hole in the vetting process: nobody cares to consider, much less discuss, the cultural attitudes and religious beliefs that – apart from actual violence – can be harmful to America, specifically attitudes about Judaism, Christians, adherents of non-Islamic faiths, democracy, women, homosexuality and so on.

Of course we want to know if a Syrian refugee has had ties to terrorist group. But we also need to know what he has been taught in his homeland about us non-Muslims and our values – equality, freedom of religion and speech.

A set of studies of Syrian textbooks reveals disturbing realities, now relevant to an America which would host the products of Syria’ educational system. Nationalized by the Ba’athist party in 1967, the Syrian curriculum was the product of a joint initiative between Syria, Jordan and Egypt. Spanning 1st through 12th grades, the curriculum presented to Syrian schoolchildren follows a rigidly Sunni Muslim interpretation of both civic and religious identity – basically presenting Syrian identity as inseparable from membership within both the larger Arab and Islamic Ummas (i.e. “peoples”). This approach was adopted as a matter of political necessity for the ruling Ba’ath leadership (currently represented by the Assad regime), a Shi’ite minority ruling a Sunni-majority population. All Syrian citizens have been compelled to send their children to primary schools in which this Sunni worldview and Syrian national identification is the central theme.

The studies show that Syrian students are presented a consistently defamatory model of Jews, Judaism, democracy and the West. Syrian schoolchildren learn that although Judaism was the initial vessel for Allah’s revelation, it was quickly superseded by Christianity, which was superseded by Islam – the ultimate revelation. Thus, the continued adherence of Jews to an outdated and incomplete belief system (Judaism) classifies them as intrinsically depraved, having rejected Allah’s Divine Truth, and consigns them to “elimination” in this life, and “hell” in the next. The worldview constructed for Syrian pupils, since at least the 1980s, consistently teaches that Jews are directly and solely responsible for antisemitism and the Holocaust, that the modern State of Israel is an illegitimate occupation of Arab lands.

The simplicity and consistency of this worldview, the offering of “historical” examples as an empirical demonstration of Jewish malfeasance, whether as parasites within foreign lands, both East and West, or as ruthless colonizers displacing and persecuting the indigenous Muslim inhabitants of Palestine, results in one clear message.

As an 11th grade Syrian textbooks states: “The Jews spare no effort in deceiving us, being hostile towards us, denying our noble Prophet, inciting against us and distorting the Divine Books… collaborat(ing) with pagans and atheists against the Muslims because they see that Islam unveils their cunning ways and evil nature… (t) herefore, the logic of genuine justice decrees against them one verdict the carrying out of which is unavoidable. Their criminal intention should be turned against them by way of their elimination .” (Quoted in Islamic Education in Syria: Undoing Secularism.) But what exactly does this “elimination” entail? Examination of the textbooks makes this clear: the waging of jihad (“Holy War” or “struggle”) against both the Zionist occupiers of Palestine and, more broadly, anyone who poses a threat to Islam.

What should be even more alarming is the evidence within these textbooks which suggests that jihad, as a requirement, is not limited to one geographical area, one territorial dispute, or a single socio-political “enemy.” Thus, while the textbooks examined stress the necessity of jihad against Israel and the Jews, these mandates also, at the very least, strongly imply the necessity of jihad as a divinely commanded duty of all Muslims against all enemies, regardless of location or political persuasion. As one passage in an 8th grade textbook directly states: “Jihad today is an individual duty of every Muslim….”

Virtually each and every potential Syrian immigrant has been a participant in an educational framework which presents Jews as morally corrupt, pits all Muslims everywhere against non-Muslims anywhere, and mandates violence against apostates as a religious duty. Who is vetting for this?