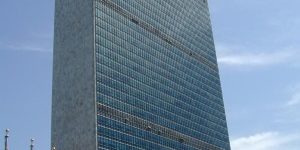 2016 has been a sumptuous year for the anti-Semites at the United Nations. The UN Security Council just targeted the only democracy in the Middle East: the State of Israel. The outgoing Obama Administration reportedly orchestrated what even Haaretz called a “hit and run” campaign in UN to denigrate the Jewish State and leave it to a fate where only conflict and hate loom. This is a cultural genocide that is no less dangerous than terror attacks. It is based on anti-Semitic lies and creates the atmosphere not for achieving “peace”, as disingenuously claimed, but for perpetuating war.

“Even as Syrian president Bashar Assad is preparing for the final massacre of his own people in Aleppo, the U.N. adopted a resolution — drafted and co-sponsored by Syria — which falsely condemns Israel for “repressive measures” against Syrian citizens on the Golan Heights. It’s obscene.”

Not a single resolution was approved for those states which really abuse human rights, such as Saudi Arabia, Turkey, Venezuela, China or Cuba, not to mention many virtual tyrannies throughout Africa. Only one resolution was approved for the “Palestinian refugee properties”, but not even a single mention for the property of the Iraqi Christians in Mosul.

Another resolution in this racist banquet of the United Nations concerned the “application of the Geneva Convention in the occupied territories”. There are hundreds of territorial disputes in the world, from Tibet to Cyprus, but only Israel deserves to be called out?

According to the liars at the United Nations, the most evil country in the world is Israel. The UN High Commissioner for Human Rights, Zeid Ra’ad, and Jordan’s Prince Zeid al Hussein are sponsoring even now a “blacklist” of international companies that have ties with Israeli companies in Judea, Samaria, East Jerusalem and the Golan Heights, to facilitate boycotting Israel in the evident hope of economically exterminating the only democracy and pluralistic nation in the region: the Jewish State.

The UN Envoy for Children and Armed Conflict, Leila Zerrougui of Algeria, suggested also including the Israeli army in the blacklist of countries and groups that regularly cause harm to children, along with Al Qaeda, Boko Haram, the Islamic State, the Taliban, and countries such as the Congo and the Central African Republic, infamous for their child-soldiers — but of course not the Palestinians, who continue to promote using children as combatants and children as “martyrs”. How is it that Western jurisprudence, created after the Second World War to prevent more crimes against humanity, is now being used to perpetuate more crimes and against democracies?

The UN women’s rights commission condemned Israel as the world’s only violator of women’s rights. Not Syria, where Assad’s forces use rape as a tactic of war, or the Islamic State, which enslaves women from religious minorities. Not Saudi Arabia, where women are punished if they do not wear the Islamic full-covering clothing in scorching temperatures, or drive a car or even leave the house. Not Iran, where “adultery” (which can include being raped) is punishable by being stoned to death. And if Palestinian men beat their wives, it’s Israel’s fault, argued UN expert Dubravka Simonovic with a straight face.

The UN’s World Health Organization also singled out Israel as the only violator in the world of “mental, physical and environmental health”, despite Israel being the only state in the world actually to give medical care to its enemies (ask Hamas leaders’ children).

Canadian law professor Michael Lynk was then appointed as the UN’s “impartial” investigator of alleged Israeli human rights violations despite his long record of anti-Israel lobbying, including his board membership on many pro-Palestinian organizations, including Friends of Sabeel and the National Council on Canada-Arab Relations.

Last October, the UN cultural agency, UNESCO — by magically declaring ancient Biblical Jewish sites “Islamic”, even though Islam did not historically exist until the seventh century, hundreds of years later — pretended, with the villainous complicity of the West, to erase the Jewish-Christian roots of Jerusalem.

It is a dreadful manipulation to try erase all Jewish and Christian history, to make believe that all the world was originally and forever only Islamic. It is a jihad. That is what a jihad looks like. It is not just orange jumpsuits, beheadings and slavery. If one can erase and rewrite history, one can redirect the future. If you do not know where you are coming from, what values will you defend or fight for?

Names matter. If it is Jewish, then it is called “Judea and Samaria”; if it is “Palestine”, you can say the “Jews stole it” and that Israel is a “colonialist construct” based on “injustice”. Why then is no one is pointing to the entire continent of South America, conquered from the native Indians by Cortés, Pizarro and Europeans with guns?

The latest UN Security Council resolution against Israel is not only about “settlements”, but the Old City of Jerusalem. Its members want to reset history not at 1967, but at 1948, the year Israel was born.

When Marcel Breuer and Bernard Zerfuss designed UNESCO’s building in concrete and glass at the Place Fontenoy in Paris, and Pablo Picasso donated frescoes to it, they most likely imagined the rebirth of Western culture after the tragedies of war, the Holocaust and the Nazi nightmare. Never in any other spot on earth were words such as “education”, “science”, “culture”, “freedom”, “peace” and “brotherhood” repeated so many times. There was hope and commitment that the future would be better — not worse. But the dream lasted no longer than the few minutes of the announcement.

The Soviet Union had in fact already stained UNESCO’s cultural programs with the red of Communism, such as when UNESCO promoted a “new world information order”, the goal of which goal was to end the dominance of the Western press — presented as a “threat” to the “cultural identity” of “Third-World” nations. Under the Eiffel Tower, the authoritarian and anti-Western Third World then took control of the UN cultural center, which became, according with the Washington Post, “overly bureaucratic, costly, wasteful and imbued with an anti-Western, anti-capitalist bias”.

Since then, Israel continues to be treated as a pariah by these ideological and corporeal criminals on the Seine. Even after that, in 1975 the UN body “tipped its hand” by propagating the anti-Semitic blood libel of “Zionism is racism”.

Last month, the President of the UN General Assembly, Peter Thomson, sported the famous checkered scarf, the keffiyah, a symbol of the “Palestinian resistance” (read terrorism). This is simply the continuation of the cultural obliteration of Israel, which is supposed to justify next its physical obliteration.

The fate of Judeo-Christian civilization — Christianity as well as Judaism — on which all our values are based, is tied to the fate of the State of Israel. If Israel ceases to exist, so does Christianity. The world has been witnessing how the few Christians and other non-Muslims still remaining in the rest of the Middle East — once the glorious Christian Byzantium — are being slaughtered, now that the Jews and Greeks are gone.

The United Nations’ war on the Israel’s Jews is, at heart, a war against the West. The UN and its backers are briskly paving the way for the European Caliphate.