Finally, a breath of fresh air for Israel 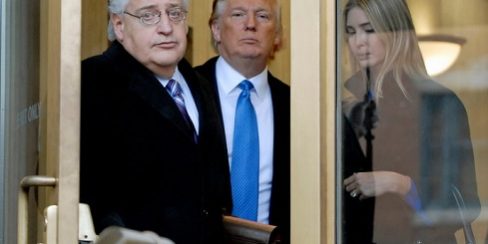 Donald Trump’s nomination of David Friedman as his new U.S. ambassador to Israel is encouraging for Israel and all who support her. It’s about time a U.S. ambassador is appointed who understands Israel’s history, security needs, the hostility surrounding her, and her international legal rights as a sovereign nation.

Whether or not Trump will agree on all points with his future envoy is unknown, as are the final results of the nominee’s confirmation hearing; nevertheless Freidman represents the opening of a new window—and a breath of fresh air for U.S.-Israel relations.

The president-elect’s longtime friend, bankruptcy attorney and more recently, senior campaign advisor, has made it clear that unlike the outgoing administration, Trump will not try to force Israel into political solutions or concessions that violate the will or sovereignty of its government or people, nor will he publicly air disagreements between the partners.

Referring to one of Trump’s first priorities, to move the U.S. Embassy from Tel Aviv to Jerusalem, Friedman announced he intends, “to strengthen the unbreakable bond between our two countries, and advance the cause of peace within the region, and l Iook forward to doing this from the U.S. embassy in Israel’s eternal capital, Jerusalem.” Promising to move the embassy and then reneging on the promise has been a tradition for U.S. presidents since a 1995 law mandated the move. Every president waived it on security grounds.

In an August editorial for Israeli news organization Arutz Sheva, Freidman wrote that the two-state solution is more like a “two-state narrative” that solely benefits the United States and the Arabs. His premise: The two-state solution relies on a ‘fiction”—that the Palestinians renounce terrorism; stop inculcating violence against Israel among schoolchildren; give up their demand for an influx of Palestinian “refugees” into Israel who have never set foot in the country; and recognize Israel.

Friedman said he considers Israel’s settlements to be legal, and that he would support its annexation of parts of the West Bank. He is undoubtedly aware that international law and history support his position. Unlike President Obama, an adamant critic of Israeli settlement construction, Trump will not dictate to Israel what policies it should adopt, or where it is allowed to build, Friedman said.

Friedman has deep ties to the Land. He is president of American Friends of Bet El Institutions, which supports the large West Bank settlement near Ramallah. His bar mitzvah took place at the Western Wall in Jerusalem 45 years ago. He speaks fluent Hebrew and is “a lifelong student” of Israel’s history.

His appointment drew praise from Israel and its supporters, disdain and ire from leftist media and liberal Jews such as J Street, the George Soros-funded, anti-Israel organization. He likely will face a fierce battle during his confirmation hearings.

Zionist Organization of America National President Morton Klein said Friedman, “has the potential to be the greatest U.S. Ambassador to Israel ever. He thoroughly understands the detailed tragic reality of the Arab/Islamic war against Israel. He has a powerful grasp of Israel’s defense needs, the dangers they face, and the danger now of a Hamas/PA State. No previous ambassador appreciates the political, historic, legal, and religious rights of the Jews to Judea, Samaria and Jerusalem like David.”

As friends of Israel, we congratulate and welcome Ambassador-designate Friedman and wish him well.