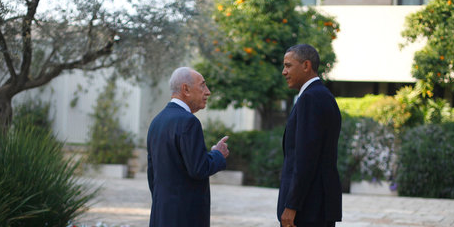 A Who’s Who of world leaders will descend on Israel beginning on Thursday to attend the funeral of Shimon Peres, the state’s ninth president and two-time prime minister and one of its founding fathers, who died on Wednesday morning at the age of 93.

Peres will be buried in a state ceremony Friday morning on Mount Herzl in the section of the cemetery reserved for the Great Leaders of the Nation. His body will first lie in state in the Knesset plaza from 9 a.m. to 9 p.m. Thursday so the public can pay its last respects.

Announcing his father’s death, Chemi Peres told reporters his father used to say a man’s greatness is as big as the cause he serves.

“He had no interest other than to serve the Jewish people whom he believed in and loved until his last breath,” he said.

Prime Minister Benjamin Netanyahu eulogized the late president by saying few in the country have done as much for the state and the Jewish people as did Peres.

At a commemorative cabinet meeting held for Peres hours after his death, Netanyahu said that when the veteran statesman immigrated to Israel from Poland as a boy and went to an agricultural school in Ben-Shemen, he had written that the goal of his life was to serve his people.

“He achieved that goal,” the prime minister said, with a portrait of Peres – a black ribbon around the right corner of the picture frame – immediately behind him. “He believed with all his heart in the goals of Zionism.”

Netanyahu called Peres’s full, active life a symbol of Israel’s history: “The life of an ancient people that moves forward independently in its land, with the power to defend itself and that is building its homeland with sweat and courage.”

Netanyahu – who for many years was a bitter political rival of Peres and defeated him in the 1996 election but later worked closely with him when the latter was president – said Peres’s name will forever be etched in the memory of the nation “as one of Israel’s great leaders,” noting that Wednesday was the first day of the state’s existence without Peres.

The prime minister recalled the first time they met 40 years ago at the grave of his brother Lt.-Col. Yonatan Netanyahu, who was killed in the Entebbe rescue raid. Peres was defense minister at the time and played a key role in the decision to carry out that mission.

“There were many things we agreed upon, and that number grew with the years,” Netanyahu said. “But there were also disagreements between us that are a natural part of life in a democracy.

“But in those instances, as well, the respect I had for Shimon never wavered. On the contrary, as time passed, our ties grew closer. I respected him and loved him.”

US President Barack Obama hailed Peres, saying, “A light has gone out, but the hope he gave us will burn forever.”

“There are few people who we share this world with who change the course of human history, not just through their role in human events, but because they expand our moral imagination and force us to expect more of ourselves. My friend Shimon was one of those people,” Obama said. Although early reports indicated that the US president would attend Peres’s funeral, there has been no confirmation from the White House. If he does attend, he is expected to arrive on Friday morning and leave following the funeral. White House spokesman Josh Earnest said Obama “would very much like to” attend and that the White House staff was working “diligently” to see if they could make it happen.

Dozens of statesmen from around the world are expected to attend the funeral, which would be the largest gathering of world leaders in the country at the same time since Yitzhak Rabin’s funeral 21 years ago.

Among those scheduled to arrive are French President François Hollande, the United Kingdom’s Prince Charles, Canadian Prime Minister Justin Trudeau, European Council President Donald Tusk, Romanian President Klaus Iohannis, Mexican President Enrique Peña Nieto and Togo President Faure Gnassingbé. Other heads of state who have confirmed their participation are the presidents of Cyprus, Croatia, Switzerland, Latvia, Serbia, Poland and Austria, in addition to dozens of other prime ministers and dignitaries from China, India, Russia, the Netherlands and numerous other countries.

Former French president Nicolas Sarkozy also will take part, as will former US president Bill Clinton, who worked closely with Peres in the 1990s during the Oslo peace process for which Peres, along with Rabin and Yasser Arafat, won the 1994 Nobel Peace Prize.

“Israel has lost a leader who championed its security, prosperity and limitless possibilities from its birth to his last day on Earth,” Clinton said in a statement issued together with his wife, US presidential candidate Hillary Clinton.

Former British prime minister Tony Blair posted a tweet calling Peres “a political giant, a statesman who will rank as one of the foremost of this era or any era, and someone I loved deeply.”

Russian President Vladimir Putin praised him for working toward a peace settlement.

“I was extremely lucky to have met this extraordinary man many times. And every time I admired his courage, patriotism, wisdom, vision and ability to get down to the essence of the most difficult issues,” said Putin.

US presidential candidate Donald Trump called Peres a “highly effective patriarch” to both his family and the nation.

“He was a consummate statesman, a distinguished patriot and a friend of peace-loving people everywhere,” said Trump. “Peres personified dignity and grace in a region of the world where both run far too short.”

Although Peres had maintained contact over the years with numerous Arab leaders, the only Arab country that had indicated as of Wednesday that it would send a representative was Morocco, which will be represented by Andre Azoulay, an adviser to King Mohammed VI.

A list compiled by the Foreign Ministry does not include any representative from Turkey, with which Israel recently renewed relations.

Palestinian Authority President Mahmoud Abbas sent a letter of condolences to the Peres family, praising him for being a partner in peace with Arafat and Rabin.

Thousands of people are expected to file past Peres’s coffin at the Knesset on Thursday, including Netanyahu, President Reuven Rivlin, Knesset Speaker Yuli Edelstein, mayors from across the country and ambassadors from around the world.

Flags at the Knesset, army bases and Israel’s representations around the world were lowered to half-mast on Wednesday afternoon.

The arrival of the world leaders is taking part at a time of peak traffic at Ben-Gurion Airport, with hundreds of thousands of people both entering and leaving the country ahead of Rosh Hashana, which begins on Sunday evening.

The funeral will pose a massive security challenge for the police, and – because various roads will be closed intermittently in and around Jerusalem – driving in the capital over the next two days is expected to be difficult.

Labor Party officials expressed outrage that party chairman Isaac Herzog was not invited to speak at the funeral. They complained that all the speakers were “family members and Likudniks.”

Culture Minister Miri Regev, whose committee is in charge of organizing the funeral, responded that the opposition leader does not normally speak at such events according to protocol and that due to the proximity of Shabbat, no speeches would be added.