You want it darker, we’ve got it shining 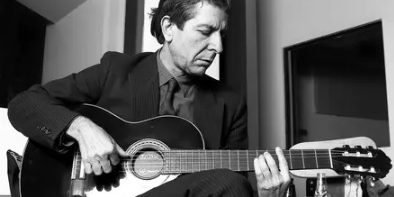 THINKING ON LEONARD COHEN on his birthday and the eve of Rosh HaShanah 5777.

On his 82nd birthday, which was September 21st 2016, Leonard Cohen released a single You Want it Darker, the title song of his new album with the same title, and the same message, seemingly.

The song is performed together with cantor Gideon Zelermyer and Shaar Hashomayim Synagogue Choir in Montreal.

The effect of this Leonard’s deed – the song, its release, its performance, its lyrics, the way of performing it – is huge and reverberating.

After this very special single’s release, everyone is picking up the things which are closer to one’s heart: music critics are jumping on ‘mesmerising’ side of the song and performance; Leonard’s ever faithful fans embracing it as it is, and cannot help themselves but to think on the recent pass away of Marianne; wide Jewish public is attentive to the strongest possible connection to the core of Jewishness in this addressing to the Creator by the one of his very best sons.

I personally am completely taken by Leonard’s smashing honesty and his immense courage. We know that those are his qualities, but this time, it is not about qualities. It is about the Heart of the Matter. And he did it in the best way imaginable.

As in our famous Rose of Thirteen Petals, a Kabbalah-based concept of complex and inter-depending view of the world and the place of a person in the layers of realities, both Leonard’s honesty and his bravery in the You Want It Darker-deed are far from being one-dimensional. It never is the case for Leonard, anyway, but in the things that straightforward as honesty and courage, more than one dimension is a luxury, and here, with multi-dimensional layers of it created and carried on by Leonard, we have a super-indulgence of human spirit and its strength.

I admire and salute our dearest Leonard for his human bravery, for his intellectual honesty, for his artistic finery and simplicity of the richest kind. I also am overtaken by his courage in bringing utterly innermost things to the stage open to the world – as the only real, exemplary kohen, the member of the priestly family in Jewish tradition, is able to do. And many in this world are learning from our dear Leonard in many things beyond music.

The thinking of his heart is absolutely honest, and it shines in all its darkness now when Leonard has come to the hardest thing to do for anyone; when a person comes – mentally, to start with – to the ultimate edge between the two worlds, this one and the World to Come. We all have our way to deal with it. Or we have not. To make it public – and beautiful – is given to very handful of us, the beacons for the rest of us. It is not just a blessing of the best of our priests. It is the act of courage in all its disarming sincerity. It is ultimate mercy of a big person.

Also, the honesty of the Leonard’s quest on the balance while coming to that very thin edge in between the two worlds: “You Want It Darker – We Killed the Lights” is the exemplary of the sharpness of the mind and the honesty of the admission.

The essence of the Judaism doctrine lays in comprehension of human responsibility for our thoughts, intentions and actions. Leonard brings it out on his 82nd birthday with no-nonsense sharpness. But being who he is, with his unique heart, the Master puts the sharp truth into the beauty of the voices of the Jewish choir and his cantor whose music gets the Leonard’s words up. And Up.

Thank you, dearest Leonard. You are Our Man for generations to come.