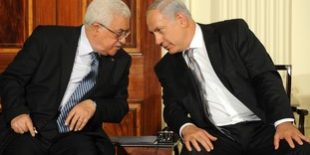 The Middle East diplomatic process may be moving north.

The announcement by Russian Foreign Ministry spokeswoman Maria Zakharova at a weekly news conference culminates a week of mixed signals from Jerusalem and Ramallah, regarding a meeting under the auspices of Russia’s President Vladimir Putin.

Both Netanyahu and Abbas have said throughout the week that they were interested, but that the other side was putting up obstacles.

Zakharova said that the “main thing now” is to choose “the right moment” for the meeting. “Intensive contacts on this matter are continuing,” she said.

Although Netanyahu said earlier in the week in The Hague that he would be willing to meet in Moscow if the Palestinians did not put any preconditions on the talks, there was no word from his office following the Russian Foreign Ministry statement regarding the matter.

Palestinian officials said early in the week as well that Abbas was willing to hold talks without conditions.

Putin’s special Mideast envoy, Mikhail Bogdanov, was in the region this week and held talks with both Netanyahu and senior PA officials in Jerusalem and Ramallah about the idea.
Noting that US mediation efforts of 2013-2014 failed, Zakharova said that Moscow is convinced “of the need to resume the negotiation process” in order to normalize the situation, and “find a compromise solution on the basis of international law.” She said that the continuing deadlock is a cause of “great concern,” and leads to a “steady deterioration of the situation on the ground.”

Avi Dichter, chairman of the Knesset’s Foreign Affairs and Defense Committee, welcomed a Netanyahu-Abbas meeting, saying that – if nothing else – it can bring with it a degree of understanding.

He repeated Israel’s position that previous Palestinian demands that the meeting be preceded by an Israeli settlement freeze and the release of prisoners is “not serious.”

“These are completely unacceptable conditions for Israel,” he said.

Dichter, a former head of the Shin Bet (Israel Security Agency) also related to documents revealed this week indicating that Abbas was a KGB agent in Damascus in 1983.

“In the 1980s, there was a price for anyone who wanted to study at a university in Moscow,” Dichter said, adding that this was certainly true for Palestinians studying there. At the same time, Dichter said that even if Abbas provided the Soviets with some him into an agent.

Abbas earned a PhD in history from Oriental College in Moscow in 1982.

Dichter dismissed Palestinian claims the whole story was fabricated by Israel to discredit Abbas, saying the information was gleaned by academics who were conducting research.